Nabeelah and Entisar both live in shanties in the slums of Sana’a. Barely scraping by, they have no money to take their severely malnourished children to the hospital. Learn how a new cash transfer programme could be a lifeline for their families.

SANA’A, Yemen, 5 May 2016 – Nestled in the heart of one of Sana’a’s many congested slums, is a single room with cold, bare walls that 33-year-old Nabeelah calls home. Inside, there is one bed, an open toilet and a small kitchen that can barely fit one person.

The mother of four and her family have lived in the shanty since they moved here from Mahaweet six years ago, in search of a better life. After the escalation of violence in the country, their daily existence became an extraordinary story of survival.

Nabeelah is now expecting her fifth child, and the family’s resources are already stretched thinner than ever.

Like so many others living in the slums, their survival hinges on what her husband can scavenge from leftovers outside restaurants. He occasionally cleans the streets and earns a pittance. When he cannot bring home food, Nabeelah borrows some grains from her sister. Still, on most nights her children go to sleep hungry.

“I have no money to take my ailing son to the hospital, I hardly have any money to feed them two meals a day,” says Nabeelah.

Her youngest son Ali is barely two years old, and is severely malnourished – to the point that his little fingers have curled up. No health workers have visited this forgotten community.

>> Donate now to help children affected by the crisis in Yemen

Until six months ago, Nabeelah and her family received monthly financial assistance from the government’s Social Welfare Fund (SWF), a cash transfer programme that reached 1.5 million Yemenis. According to a recent survey, more than 70 percent of those who received money from the SWF spent it on purchasing food.

But in 2015, an escalation in the ongoing conflict forced the government to suspend the benefit. This has left around eight million people, directly and indirectly, without an income.

The situation has been exacerbated by rising prices of food and basic commodities, loss of assets and livelihoods, and displacement – all caused by the conflict in the country.

Now, UNICEF and its partners are responding to the desperate needs of Nabeelah and hundreds of thousands like her by launching the Humanitarian Cash Transfers Programme. Those living in extreme poverty receive an unconditional cash transfer of US$100 a month for an initial period of six months.

The first phase, which has begun, includes transfers to more than 10,000 households in Sana’a and Taiz cities, focusing on the poorest and most affected communities. An additional 15,000 households will be covered in the coming months, and will mainly focus on Taiz Governorate, where the humanitarian situation is very critical.

“So far we have already disbursed cash to families in the worst hit cities like Sana’a and Taiz,” says Buthaina Al-Iryani, who is leading the Humanitarian Cash Transfer project in Yemen. Buthaina and her team worked tirelessly to secure initial funds for the project, and are now concentrating on funding the next phase.

“For us, securing funds for these families is the most immediate priority. The money will run out in six months, we need others, especially the international community, to come in support of these people.”

Hope for a young mother

As part of the programme, a group of surveyors walk door to door through the slums to find the individuals and families who need support most urgently – those who live in the direst conditions, those who have little or no income.

When a family qualifies, their details are recorded, fingerprints taken and they are issued a card. These steps will help minimize any foul play when the cash is distributed.

Today, the mapping survey team heads to another side of town, where they meet a family that is part of Yemen’s marginalized Muhamasheen community.

Inside one of the shanties, 16-year-old Entisar sits gently playing with her 1-month-old daughter Rahma, who is also severely malnourished. Married last year to a boy not much older than her, Entisar doesn’t have any money to take Rahma to the hospital. The family fled from Haradh six months ago when the fighting began. Her husband now works as a street cleaner and most of his salary goes into paying rent for their one room house.

For people like Entisar, the UNICEF assisted cash transfer is a lifeline. There is finally some hope in this mother’s life, who is little more than a child herself. She promises to rush her child to the hospital as soon as she gets the money.

UNICEF is prioritizing these cash transfers with the goal of integrating them into Yemen’s national social protection mechanisms for the longer term.

>>  Learn more about the humanitarian needs of the children of Yemen 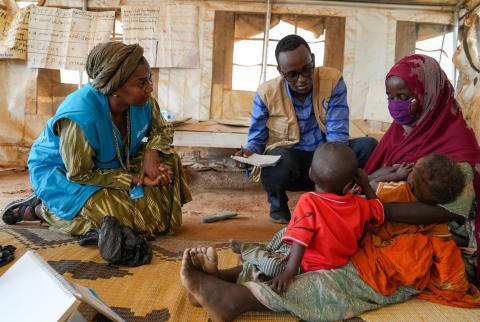