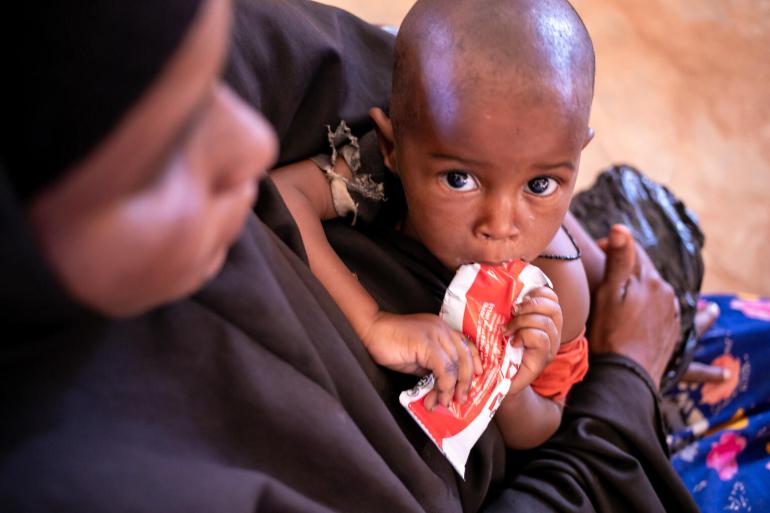 UNICEF/UN0591078/Taxta
A child is held by his mother as he feeds on a sachet of ready-to-use therapeutic food in Somalia.

NEW YORK, 17 May 2022 — The number of children with severe wasting was rising even before war in Ukraine threatened to plunge the world deeper into a spiralling global food crisis - and it’s getting worse, UNICEF warned in a new Child Alert.

Currently, at least 10 million severely wasted children – or 2 in 3 – do not have access to the most effective treatment for wasting, ready-to-use therapeutic food (RUTF). UNICEF warns that a combination of global shocks to food security worldwide – led by the war in Ukraine, economies struggling with pandemic recovery, and persistent drought conditions in some countries due to climate change – is creating conditions for a significant increase in global levels of severe wasting.

“For millions of children every year, these sachets of therapeutic paste are the difference between life and death. A sixteen per cent price increase may sound manageable in the context of global food markets, but at the end of that supply chain is a desperately malnourished child, for whom the stakes are not manageable at all,” said Russell.

South Asia remains the ‘epicentre’ of severe wasting, where roughly 1 in 22 children is severely wasted, three times as high as sub-Saharan Africa. And across the rest of the world, countries are facing historically high rates of severe wasting. In Afghanistan, for example, 1.1 million children are expected to suffer from severe wasting this year, nearly double the number in 2018. Drought in the Horn of Africa means the number of children with severe wasting could quickly rise from 1.7 million to 2 million, while a 26 per cent increase is predicted in the Sahel compared to 2018.

The Child Alert also notes that even countries in relative stability, such as Uganda, have seen a 40 per cent or more increase in child wasting since 2016, due to rising poverty and household food insecurity causing inadequate quality and frequency of diets for children and pregnant women. Climate-related shocks including severe cyclical drought and inadequate access to clean water and sanitation services are contributing to the rising numbers.

“There is simply no reason why a child should suffer from severe wasting – not when we have the ability to prevent it. But there is precious little time to reignite a global effort to prevent, detect and treat malnutrition before a bad situation gets much, much worse,” said Russell.

About RUTF
Ready-to-use therapeutic food (RUTF) paste is a lipid-based energy dense, micronutrient paste, using a mixture of peanuts, sugar, oil, and milk powder, packaged in individual sachets. UNICEF, the global leader in RUTF procurement, purchases and distributes an estimated 75-80 per cent of the world's supply from over 20 manufacturers located across the world.

About ODA
Official development assistance (ODA) is government aid that promotes and specifically targets the economic development and welfare of developing countries. The Development Assistance Committee (DAC) of the Organization for Economic Co-operation and Development (OECD) adopted ODA as the main instrument of foreign aid in 1969 and it remains the main source of financing for development aid. ODA data is collected, verified and made publicly available by the OECD. 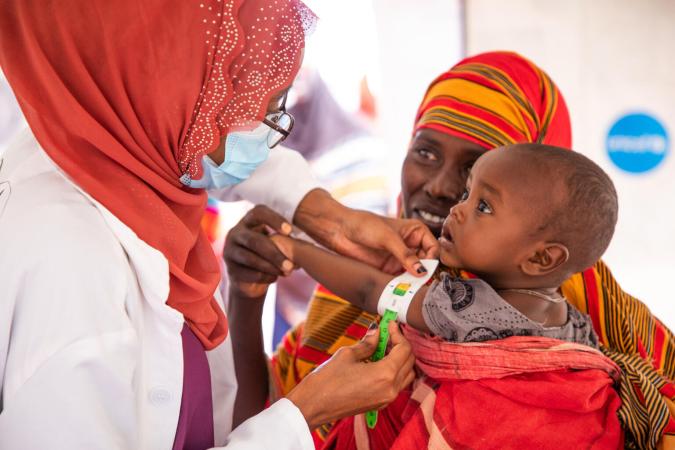 A health worker at a site for internally-displaced persons in Ethiopia measures the arm of a child to assess his nutrition status.