New report demonstrates ‘urban paradox’— some of the poorest children in cities fare worse in well-being, education or health than poorest rural children 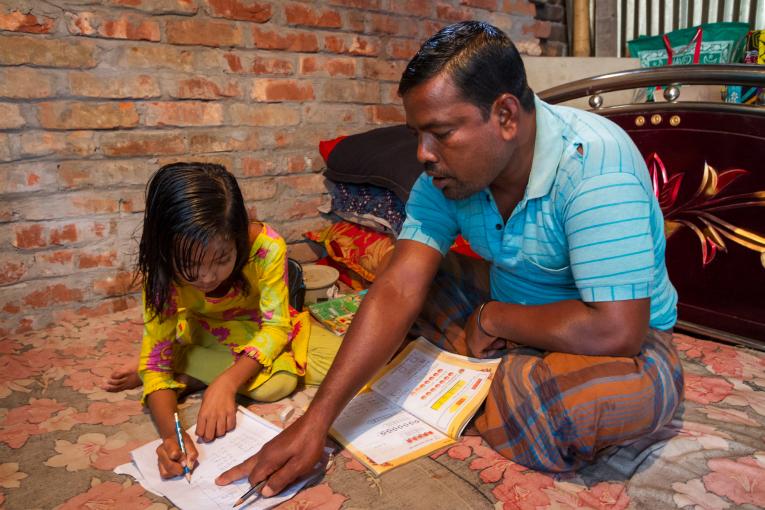 UNICEF/UN07007/Lynch
Azharul Islam, 45, works with his seven-year-old daughter Aduri on her homework. Azharul is a rickshaw puller who studied to class eight and his wife, who studied to class three, works in a garment factory. They moved to Dhaka from the countryside five years ago so that both of them could earn. They want a better life for their youngest daughters and are focused on keeping them in school at least until they are 18. Duaripara slum, Mirpur, Dhaka, Bangladesh.

The report, Advantage or Paradox: The Challenge for children and young people growing up urban reveals that not all children in cities benefit from the so-called ‘urban advantage’ - the notion that higher incomes, better infrastructure, and proximity to services grant urban dwellers better lives. Instead, urban inequality, urban exclusion, and urban challenges to well-being, such as environmental and health hazards, can together result in an ‘urban paradox’ where many urban residents – including children - miss out and suffer more severe deprivations than their rural peers.

“For rural parents, at face-value, the reasons to migrate to cities seem obvious: better access to jobs, health care and education opportunities for their children,” said Laurence Chandy, UNICEF Director of Data, Research and Policy. “But not all urban children are benefitting equally; we find evidence of millions of children in urban areas who fare worse than their rural peers.”

The report identifies 4.3 million poor urban children who are more likely to die before age 5 than their peers in rural areas. It similarly finds 13.4 million poor children living in cities who are less likely to complete primary school than their rural counterparts.

The report analyses 10 indicators of child well-being in 77 mostly low and middle-income countries**. It confirms that in most countries, urban children fare better than rural children, on average. But these averages hide yawning inequalities in urban areas. Moreover, when children from urban and rural households with similar levels of wealth are compared, the urban advantage is no longer apparent.

“Children should be a focus of urban planning, yet in many cities they are forgotten, with millions of children cut-off from social services in urban slums and informal settlements, and exposed to environmental or health hazards due to overcrowding,” Chandy added. “Implementing solutions to urban development and planning is crucial to arrest these social and economic disparities.”

Up to 1 billion people are estimated to live in slums – hundreds of millions of them children. Africa and Asia are urbanising rapidly. By 2030, seven of the 10 largest cities will be in Asia, and Africa’s urban population is the fastest growing with an annual rate of growth of 3.7 per cent.

The report also highlights intra-urban inequities reflected in childhood outcomes which can be attributed to limited access to essential services. For instance, in half of the countries analysed, the poorest urban children are twice as unlikely to have access to basic sanitation services than urban children from the richest households.

In the absence of innovative ways of supporting the urban poor, inequity in childhood outcomes may widen and an increasing number of urban children will be shut out of overall progress.

The report calls for a number of actions from urban authorities and the global community: