Attacks on schools, students and educators are attacks on children’s right to an education – and on their futures.

Around the world, attacks on children continue unabated, as warring parties flout one of the most basic rules of war: the protection of children. The protracted nature of conflicts today is affecting the futures of entire generations of children. Without access to education, a generation of children living in conflict will grow up without the skills they need to contribute to their countries and economies, exacerbating the already desperate situation for millions of children and their families.

Between 2014 and 2018, there were reported cases of attacks on education in 87 countries.

A child’s right to education cannot be safeguarded in conflict zones without education itself being protected. Education can be a life-saver. Out of school, children are easy targets of abuse, exploitation and recruitment by armed forces and groups. School should provide a safe space where children can be protected from threats and crises. It is also a critical step to breaking the cycle of crisis and reduces the likelihood of future conflicts.

What is the Safe Schools Declaration?

The Safe Schools Declaration was opened for state endorsement in Oslo, Norway, in May 2015. It is a political commitment to better protect students, teachers, schools and universities during armed conflict, to support the continuation of education during war, and to put in place concrete measures to deter the military use of schools.

Ukraine became the 100th country to endorse the Safe Schools Declaration. By endorsing the Declaration, States commit to restoring access to safe education and to developing education systems that are conflict-sensitive and promote respect between social or ethnic groups. The Declaration is a framework for collaboration and exchange, and endorsing countries meet on a regular basis to review implementation of the Declaration.

Safe Schools Declaration: Who has endorsed

States, countries and territories that have endorsed the Declaration shown in blue. Source: GCPEA. Information accurate as of 18 February, 2021.

This map is stylized and not to scale. It does not reflect a position by UNICEF on the legal status of any country or area or the delimitation of any frontiers. The dotted line represents approximately the Line of Control agreed upon by India and Pakistan. The final status of Jammu and Kashmir has not yet been agreed upon by the Parties. The final boundary between the Sudan and South Sudan has not yet been determined.

What is UNICEF’s role?

UNICEF works with states who have endorsed the Declaration and other armed groups to protect education from attack. UNICEF is on the frontlines in conflict-affected countries to develop school safety plans, get children back to learning by providing psycho-social support and informal learning opportunities, training teachers, rehabilitating schools and distributing supplies for teaching and learning.

UNICEF also works with a range of partners to help children learn despite conflict and insecurity. For example, a partnership with governments across West and Central Africa is helping expand an innovative radio education programme that provides an alternative learning platform for children and youth affected by crises. 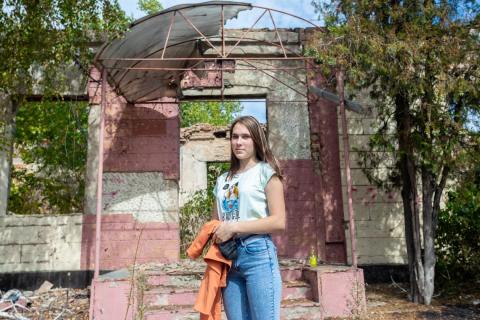 The long road to education for children in eastern Ukraine

Years since the shelling began, children are still feeling the effects of the conflict

Children are coming under attack in conflicts across the world. We can’t accept this as a ‘new normal’