A total of US$8 million has been allocated by the Government of Japan for two projects designed by the two UN agencies in close cooperation with the Government of the Kyrgyz Republic to reflect national priorities. The Kyrgyzstan Election Support Programme has been prepared by the Central Electoral Commission, State Registry Service and UNDP to further enhance the inclusion, integrity and transparency of the electoral operations. The project Enhancing the resilience of children to climate and disaster risks in the Kyrgyz Republic will be implemented through UNICEF.

The First Deputy Minister of Foreign Affairs of the Kyrgyz Republic, Nuran Niyazaliev, expressed gratitude to the Government of Japan for the continued support of the democratization processes in the country and increasing the transparency of elections. He emphasized that the joint project with UNICEF “Safe Schools” is especially relevant this year, Year of Regional Development, Digitalization of the Country and Support of Children announced by the President Zheenbekov. Niyazaliev also thanked the partners UNICEF and UNDP in Kyrgyzstan for their help in developing these important and actual projects.

Mr. Shigeki Maeda, the Ambassador Extraordinary and Plenipotentiary of Japan to the Kyrgyz Republic noted: “It is a great pleasure to attend the signing ceremony between the Government of Japan and UNDP as well as UNICEF to implement the projects in the Kyrgyz Republic.  I would like to thank all the people who made great efforts in various preparations and arrangements toward setting up the projects”.

The $4 million electoral support programme, which will be led by the United Nations Development Programme (UNDP), will support the Central Electoral Commission in further enhancing the inclusion, integrity and transparency of the electoral operations in accordance with international standards, including the sustained upgrade and modernization of equipment.

“Fair and competitive elections are at the heart of democracy because it enables citizens to elect their representatives to govern the country. With the financial support of the Government of Japan and technical support from UNDP, the CEC will be able to further advance the country’s progress on free and fair elections by ensuring the sustainability of the biometrics-based voter identification model” said Ms Louise Chamberlain, UNDP Resident Representative.

Japan’s support to consolidate and advance democratic process in Kyrgyzstan made a key contribution to the great progress already achieved by the Kyrgyz Republic in 2015 and 2017 elections and will now contribute to further increase the reliability of the new voting system.

The disaster risk reduction project, with Japan’s contribution of US$4 million, which will be implemented by the Ministry of Education and Science and the Ministry of Emergency Situations, with UNICEF’s support, will represent the second phase of the State Programme “Safe Schools and Pre-schools in the Kyrgyz Republic in 2015-2024”. Under the first phase, developed over the last three years (2017-2020), and also funded by Japan, more than 64,400 children in over 119 schools across the country were reached, building on their resilience against disasters.

Addressing the participants of the signing ceremony, UNICEF Representative in the Kyrgyz Republic Ms. Christine Jaulmes noted: “Japan is known as a model for taking proactive disaster risk reduction measures and for integrating these in the education sector. Today, thanks to the support of the Japan Government, Kyrgyzstan can benefit from this expertise and follow this good example. Through this project, Disaster Risk Reduction interventions will be scaled up in order to cover all schools of Kyrgyzstan, ensuring the safety of all girls and boys in case of a disaster or emergency situation.”

During this second phase, the plan is to expand and institutionalize the school-based disaster risk reduction module to the remaining 1,800 schools across the country by building the capacity of District Education Department staff and teachers, conducting emergency drills, as well as supervising development and execution of DRR plans in each school. 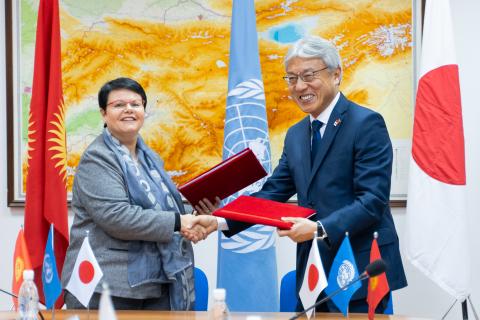 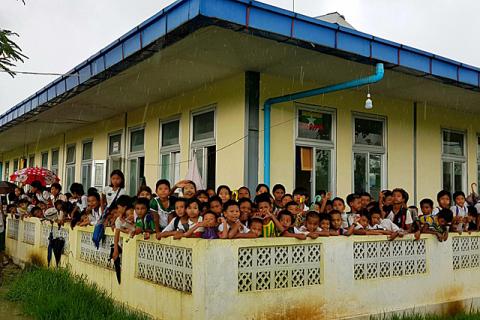 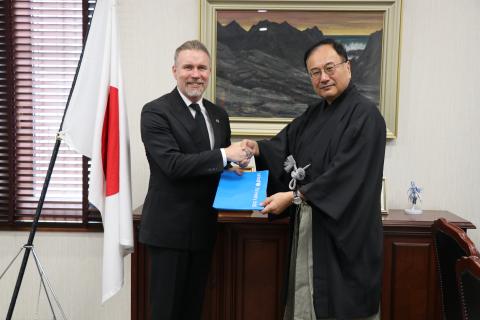 The Government of Japan provides 1.8 million US$ ...

The Government of Japan has provided a generous donation of 1.8 million US$ to UNICEF to support children affected by the recent floods in the Islamic Re...