Leave no children behind

Apinya Sattaram, 27, has two children. The oldest is eight years old. Her second, Pleang, was born in September 2015. He is small and fragile, wrapped in a blanket with a tube taped to the side of his face. A large white scar is visible above his hairline. Pleang suffocated on amniotic fluid during labour, a condition that affects his ability to breastfeed. After he was born, Apinya had to leave work to take care of him full time.

The family are very poor. They live in Buriram province, northeast Thailand. Their house was built by the local authorities and is in bad condition. They survive on earnings from Apinya’s husband, who works at a tools and supplies shop where he makes around 4,000 baht a month ($114 USD). They also receive a disability grant of 800 baht per month for Apinya, who has muscular weakness. It’s barely enough to feed the family.

In October 2015, the Thailand Government introduced the Child Support Grant to provide financial assistance to poor families with newborn children. Apinya’s family was one of the first to benefit. She received 400 baht per month, later increased to 600 baht. For Apinya, this makes a big difference. “I use the grant to buy diapers for Pleang, and for travel expenses when I take him to see the doctor,” she says.

In June 2016, Pleang was hospitalised and Apinya had to spend all the grant money on his medical care, while he stayed in the emergency room at the local hospital. She also had to travel to see doctors at Maharaj Hospital in Nakhon Ratchasima province, which has better facilities. “When Pleang stays at Maharaj Hospital, I have to also rent a room for myself to look after him,”she says.

UNICEF worked closely with the Government of Thailand on the design of the Child Support Grant. A study conducted by the Thailand Development Research Institute, supported by UNICEF, showed that for a small child, food expenses alone range from 579 to 812 baht a month. Initially, the grant was 400 baht for children up to one year old. In March 2016, it was expanded to children up to three years old and increased to 600 baht per month.

To qualify, families must live in a household with an income per person of no more than 3,000 baht per month. As well as benefiting individual families, the policy was designed to narrow the poverty gap in Thai society. Investing in early childhood development, up to 6 years old, can reap huge rewards. Children are healthier, do better in school and have higher earning potential later in life.

“The first six years of a child’s life are the most critical period for cognitive and physical development,” UNICEF Representative for Thailand, Thomas Davin, explains. “It is during these six years that investment in a child’s development is most critical and yields the highest long-term returns; not only for the individual child but for society as a whole.

“By reaching poor families of children up to age three, the expanded Child Support Grant scheme goes a long way towards reaching the country’s poorest and most vulnerable children. It is also likely to be a significant contribution to reducing child poverty and addressing inequalities in Thailand.”

Another way to address these issues is through ‘south-south cooperation’. UNICEF believes that the best solutions often come from countries that have experienced, and tackled, the same problem. When developing the Thailand Child Support Grant, UNICEF looked at basic welfare schemes that had been successfully implemented in other middle income countries such as Brazil, China and South Africa.

In 2012, an impact assessment was carried out of the child support grant in South Africa. Data from the assessment clearly showed that children receiving the grant, particularly those enrolled at birth, completed more grades of schooling and performed better academically. They were also less likely to experience illness or stunting and more likely to have their growth monitored by a health professional.

In May 2012, UNICEF organized an international study visit that took nine Thai Government officials to see the South Africa scheme in operation. They were accompanied by high level government officials and the influential Thai economist Dr Varakorn Samakoses.

Christina Popivanova, UNICEF Thailand Chief of Social Policy, calls the visit a “turning point” in UNICEF’s efforts to win support for the policy from the Thai Government. It was led by the government’s planning agency and included several line ministries that would have responsibility for developing and implementing a Child Support Grant in Thailand.

“During the study visit, government officials and UNICEF staff worked together for 12 hours a day, talking about these issues and seeing a highly sophisticated payment system working in a very concrete way in a country at a similar level of economic development,” Christina says.

Dr Samakoses became a key ally. After the trip, he wrote several media articles and promoted the child support grant plan in his weekly radio program. “His support really was instrumental,” Christina continues. “When you get prominent figures like that who become advocates, they have their own networks of influence and those people in turn also become supporters of the idea. This can make all the difference.”

UNICEF hopes that the Thailand Child Support Grant will now become an example for other countries in Asia-Pacific. On 7-9 November 2016, governments from across the region will meet in Malaysia to discuss further south-south cooperation in a range of areas including child protection, social welfare and universal healthcare.

Another child to benefit from the Grant, Monluck, was born in November 2015. She is the third child in her family. Her father holds her in his arms on the porch of their traditional wooden house. Her mother Mhee learned about the Child Support Grant when she went to a public health centre for antenatal care.

The family earns a living from strawberry farming. “We just have a small piece of land,” Mhee says. “After harvest, I work in other people’s farm and earn 200 baht a day. But I don’t have work every day. One month after giving birth to Monluck, I went back to work to help my husband on the farm.”

Mhee’s hope is that Monluckcan stays in school until Grade 12. “Although there are no school fees, there are other costs like school uniforms and transport,” she says. “I want to save this money for Monluck when we have urgent needs.”

In the first 10 months since the scheme began, more than 117,000 children like Pleang and Monluckhave been registered to receive the Child Support Grant.

“The Child Support Grant is an important milestone in Thailand’s efforts to protect the country’s most vulnerable children and support their development in the first years of life,” UNICEF Representative Thomas Davin says. “It’s also a smart, long-term investment towards a prosperous economic and social future for Thailand.” 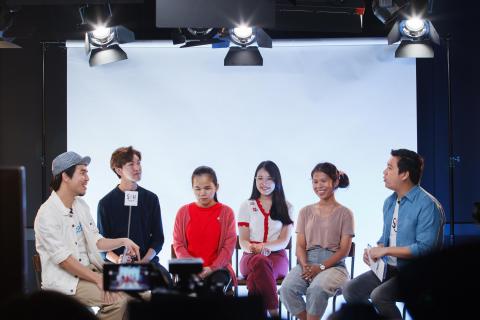 It is normal for young people to feel anxious and stressed. Just talking about your feelings can help with feelings of hopelessness. 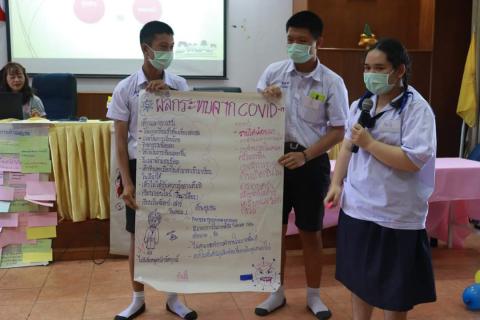 The COVID-19 pandemic may have disrupted education, formal and informal work and access to health care services for all youth, but they will not give up. 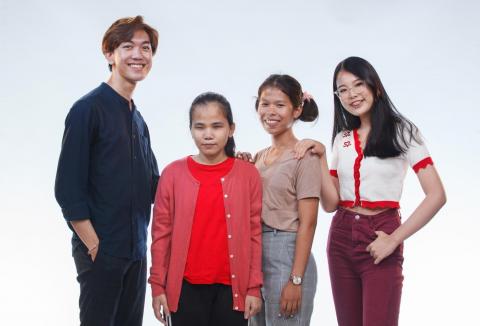 The Sound of Happiness: Youth Stories

As part of The Sound of Happiness podcast series, we bring to you young people from different walks of lives who have faced a variety of challenges.