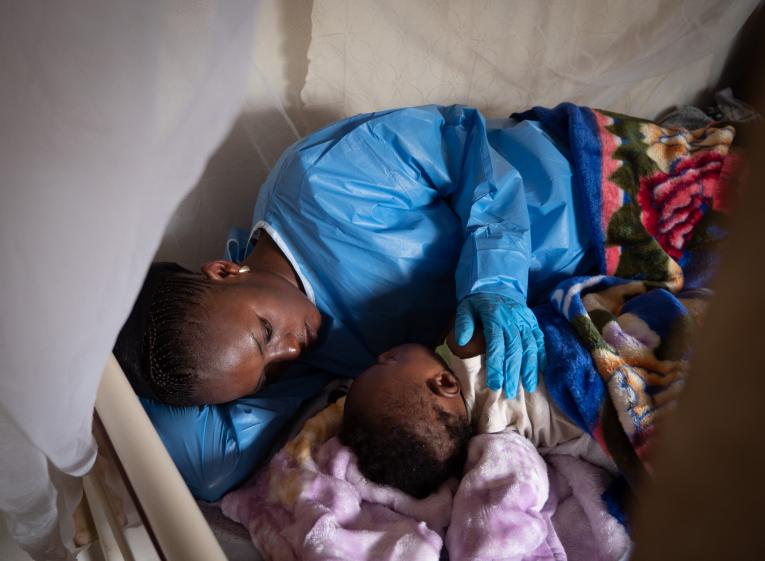 UNICEF/UN0264159/Hubbard
An Ebola survivor puts 6-month-old Josué to bed at a UNICEF-supported crèche in Beni, in eastern Democratic Republic of Congo.

(KINSHASA/NEW YORK, 21 March 2019): With the Democratic Republic of the Congo (DRC) facing one of the largest and most complex humanitarian crises in the world, UNICEF Executive Director Henrietta Fore and Under-Secretary-General for Humanitarian Affairs and Emergency Relief Coordinator Mark Lowcock called today for urgent and sustained funding for the Government-led response to meet the needs of children, families and vulnerable communities including people with disabilities.

“The relatively peaceful political transition taking place in the Democratic Republic of the Congo is an opportunity that we must seize on. We can beat back the massive and protracted humanitarian crisis. But we urgently need donors to provide further generous funding as needs continue to outpace resources,” said Mr. Lowcock, adding that DRC needs sustained international engagement to create the conditions for peace, security and long-term development.

While DRC has made progress in recent years in some areas, including a drop in the number of children dying before age 5 and larger numbers being enrolled into school, the overall humanitarian situation remains alarming. The number of people facing hunger jumped from 7.7 million in 2017 to 13 million last year. At least 4 million children are malnourished. Cholera, measles and Ebola continue to blight many lives.

“Severe acute malnutrition is expected to hit 1.4 million children under the age of five this year and put them at imminent risk of death,” said Ms. Fore. “In conflict-affected areas of the country, children and young people have been recruited as fighters, sexually assaulted and denied education, health and protection services. Together, the international community and the new government can – and should – do better for children.”

In Kinshasa, the UN principals held constructive discussions with President Félix Tshisekedi who reiterated the Government’s commitment to leading the humanitarian response across the country. The UN principals expressed the UN’s solidarity with the Congolese people. They also met with Health Minister, Oly Ilunga, to discuss the Ebola outbreak, as well as other diseases such measles, cholera and polio that are affecting the country.

In Goma, in the eastern province of North Kivu, the two officials visited a centre delivering care and assistance to women, including survivors of sexual and gender-based violence. They met with rape survivors who were receiving medical, psychosocial and legal assistance, with support from UNICEF and partners.

In Bunia, Ituri province, Fore and Lowcock visited a site for internally displaced persons, where they met with Janette Dusi Lasi who was wounded and lost her husband when their village was attacked. She now lives in the camp with her four children.

Fore also traveled to Beni and Butembo where she visited Ebola treatment facilities. She then went to day care centres where Ebola survivors, now immune to the virus, look after small children whose mothers are undergoing treatment and who themselves are at risk of developing the disease.

Children account for one third of all Ebola cases – more than in any previous outbreak. Over 1,000 children have been separated from their parents or have been orphaned due to Ebola.

The two officials agreed that successful elimination of the current Ebola outbreak required above all greater and more effective community engagement.  “Only if local people are fully involved and consulted can the outbreak be defeated,” said Mr. Lowcock. “That means engaging them actively in the response, as well as doing better to meet their wider needs, on the basis of priorities local people themselves express. Insecurity and the activities of armed groups are a real problem – but what is needed above all is to listen to and work with local people.”

“Disease outbreaks, conflict, natural disasters and sexual violence are among the challenges that keep the men, women and children of the DRC from fulfilling their full potential and make the humanitarian crisis in the country so uniquely complex,” Fore and Lowcock said. “We cannot stress enough the critical importance of funding.”

Mr. Lowcock left the DRC on 20 March and Ms. Fore on 21 March. Multimedia assets from the trip are available at: https://weshare.unicef.org/Package/2AMZIF3JFBWT