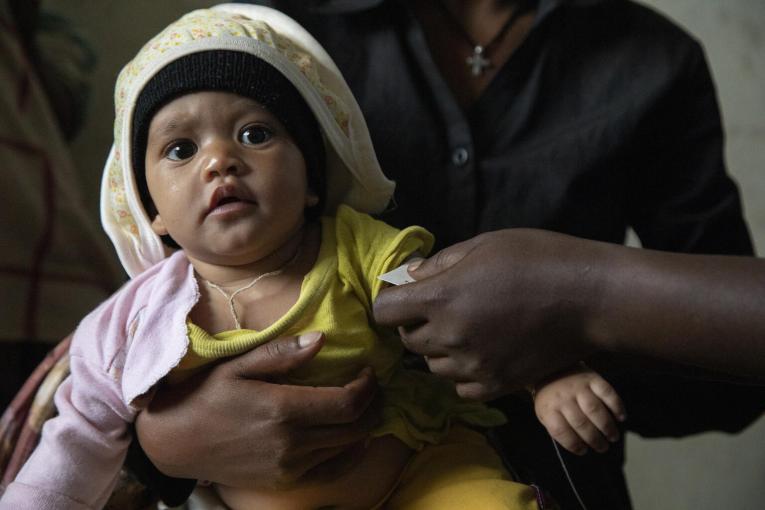 UNICEF/UN0494085/Nesbitt
A baby is evaluated during a screening for malnutrition in pregnant and lactating women and children by UNICEF and partners in Gijet in the Tigray region of Ethiopia on 20 July 2021.

GENEVA, 30 July 2021 - "As UNICEF reaches areas of Tigray that were inaccessible in past months due to insecurity, our worst fears about the health and wellbeing of children in that conflicted region of northern Ethiopia are being confirmed.

"UNICEF estimates that over 100,000 children in Tigray could suffer from life-threatening severe acute malnutrition (SAM) in the next 12 months – a tenfold increase compared to the average annual caseload.

"Screening data also indicates that almost half (47 per cent) of all pregnant and breastfeeding women are acutely malnourished. These alarming rates suggest that mothers could face more pregnancy-related complications, increasing the risks of maternal death during childbirth as well as the delivery of low birth weight babies who are much more prone to sickness and death.

"The malnutrition estimates for children are based on analysis of data from weekly Mid-Upper Arm Circumference (MUAC) screenings conducted by UNICEF and partners since the outbreak of conflict in the region nearly nine months ago. The screening data collected from more than 435,000 children provide a proxy estimation of 2.3 per cent severe and 15.6 per cent moderate acute malnutrition, which exceeds the emergency threshold of 15 per cent. The data for mothers is based on screenings conducted at the same time.

"This malnutrition crisis is taking place amid extensive, systematic damage to the food, health, nutrition, water and sanitation systems and services that children and their families depend on for their survival. The risk of disease outbreaks is high, particularly in the overcrowded, unsanitary sites hosting displaced families.

"Last week I was able to join nutrition screenings in Wajirat and Gijet woredas, two districts that had been virtually inaccessible throughout the conflict. What I saw was a confluence of conditions that put children's lives at grave risk: in many places, there were no supplies of the therapeutic foods needed to treat severe acute malnutrition. There were no antibiotics. Health facilities had no electricity. Plus, children have not been vaccinated for months.

"The recent uptick of fighting in neighbouring Afar and Amhara regions, where nearly 1.5 million people are already facing acute food insecurity, is further aggravating conditions across all of northern Ethiopia. Tens of thousands of people have been displaced. Food stores have been looted. Without sufficient humanitarian assistance, child malnutrition will rise beyond the already alarming levels, leading to an increased risk of mortality among a vulnerable population. UNICEF is dispatching supplies now to meet new emergency needs in Afar and Amhara.

"We need unfettered access into Tigray and across the region, in order to provide support children and women urgently need. Right now, we have just 6,900 cartons of life-saving ready-to-eat therapeutic foods in our warehouses in Tigray. That is enough to treat severe malnutrition in just 6,900 children.

"Reversing the nutrition, health, water and food security catastrophe requires a massive scale-up of humanitarian assistance. And that, in turn, means the humanitarian community must be allowed to conduct its work without hindrance, which includes being able to access fuel, cash and telecommunications, being able to bring in the supplies needed and being allowed to conduct normal financial transactions. Failing to meet these conditions could bring humanitarian assistance to a standstill.

"Above all, UNICEF calls on all parties to respect their fundamental obligation to protect children from harm. The dramatic nutrition and food security crisis in Tigray and the neighbouring regions is being driven by armed conflict, and it can only be resolved by the parties to the conflict." 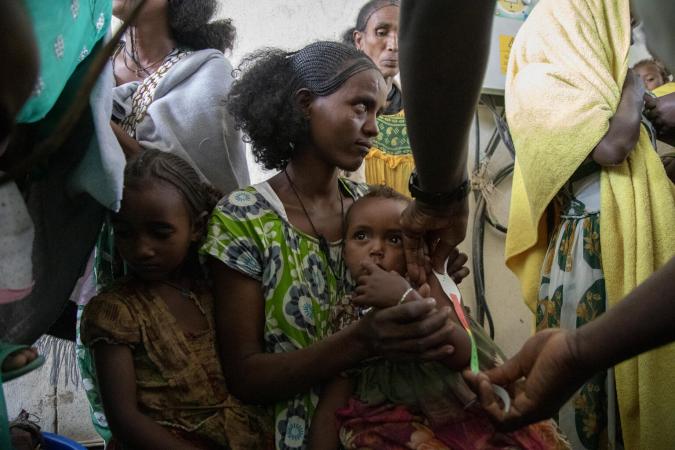 A woman holds a child during a screening for malnutrition in pregnant and lactating women and children by UNICEF and partners in Gijet in the Tigray region of Ethiopia on 20 July 2021.