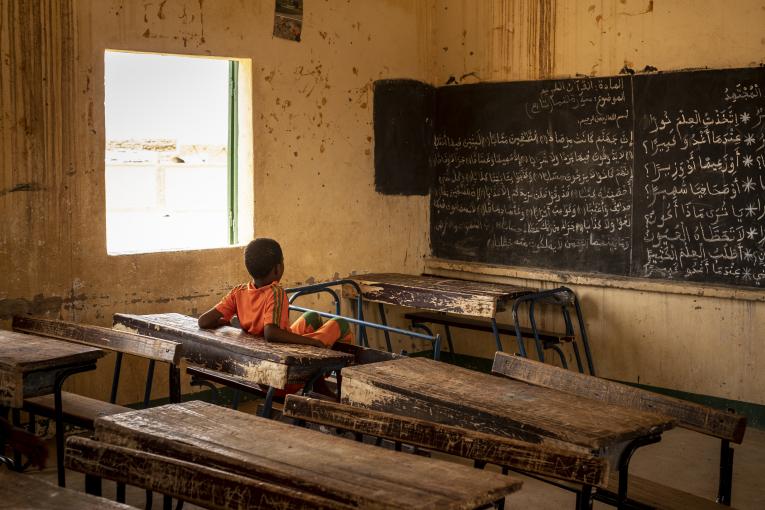 UNICEF/UN0209705/Gilbertson VII Photo
A child learning at a UNICEF-supported community school in Agadez, Niger, on May 11 2018.

DAKAR/NEW YORK, 28 February 2019 – Continued and growing insecurity in the Sahel region has forced nearly 2,000 schools in Burkina Faso, Mali and Niger to close or become non-operational, UNICEF said today. This marks a two-fold increase in the number of education facilities forcibly closed or left non-operational since 2017.

Threats to education personnel, attacks on education facilities and the use of schools for military purposes – all of which amount to a grave violation of children’s rights – have disrupted education for more than 400,000 children across the three countries and left 10,050 teachers unable to work or displaced by the violence themselves.

“Direct attacks on schools, teachers and schoolchildren themselves, and the military occupation of places of learning are serious violations of children’s rights,” said UNICEF Executive Director Henrietta Fore. “When children miss out on school – especially in times of conflict – not only are they unable to learn the skills they need to build peaceful and prosperous communities; they also become vulnerable to horrific forms of exploitation including sexual abuse and forced recruitment into armed groups.”

"Children too often bear the full force of conflict, and their schools – once safe havens to learn – too often become places of violence,” said United Nations Special Envoy on Global Education Gordon Brown. “Our aim must be that every school is a safe school.

“We will not allow a child’s school age years to be defined by empty classrooms, silent playgrounds, and perpetual violence – years where hope dies even among those who live,” said Brown. “If the SDG of universal education is to be achieved by 2030, then all children, the 75 million whose education is disrupted due to conflict or crisis – including those tragically trapped in the chaos of the Sahel – must have the right to education.”

The governments of Burkina Faso, Mali and Niger have all endorsed the Safe Schools Declaration – committing to the protection and continuation of education in armed conflict.

With many areas across the Sahel facing growing insecurity, UNICEF remains committed to working with education authorities and communities to support alternative learning opportunities including radio learning and faith-based learning initiatives, so children can continue learning wherever they are.

Just this week, the Government of Burkina Faso adopted a new strategy for the protection and continuation of education in areas of high insecurity, demonstrating a renewed commitment to deliver education to every child in the country. The new strategy includes preparation of curricula to help children whose schools have been closed catch up on learning, integration of displaced children into open schools, strengthening school security, and reconstruction for schools which have been damaged or destroyed.

In addition, a partnership with the governments of Burkina Faso, Cameroon and Niger is helping expand an innovative radio education programme that provides an alternative learning platform for children and youth affected by crises. Literacy and numeracy lessons are broadcast on radio in French and several national languages. The programme is also being rolled out in Central African Republic, Guinea Bissau, Sierra Leone, and the Democratic Republic of Congo.

UNICEF is working with partners on the ground to put in place measures that safeguard education. This includes providing tools for teachers who work in high insecurity locations, and psychosocial support and care for school children who bear the emotional scars of violence.

“At a time where the Sahel is facing growing threats of violence, we must not forget that education is a child’s right – and a powerful force for peace,” said Fore.