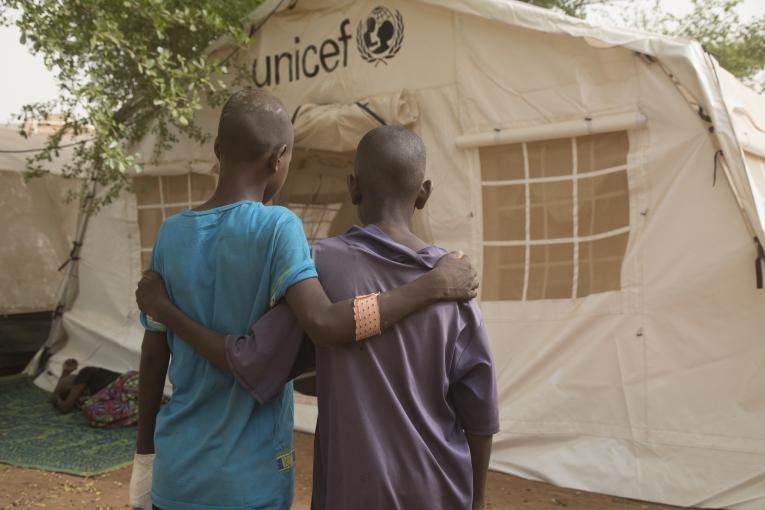 UNICEF/UN0296728/Keïta
Two injured children stand outside a UNICEF tent at the regional hospital in Mopti, Mali.

BAMAKO, Mali, 26 April, 2019 -- In Mali, the sharp deterioration of the humanitarian situation in the central region of Mopti, which is due to intercommunal violence and the presence of armed groups, is increasingly affecting the most vulnerable children.

In addition to growing concerns about grave violations against children, such as the unprecedented killing of 46 children in the 23 March attack in Bankass, UNICEF is particularly concerned about the increase in school closures.  Throughout the 2018/2019 school year, UNICEF and partners have observed a systematic and steady increase of school closures in Mopti. At the end of March 2019, 525 schools were closed in the region of Mopti (out of 866 schools closed in the country).

Nearly a third of all schools in the Mopti region are now closed due to insecurity, compromising the right to education of over 157,000 children (out of a total of 260,000 children affected by school closures in Mali).

School closures are linked to the overall deterioration of the security situation in Mopti, specifically to direct and indirect threats to communities, schools and teachers, though other factors such as a lack of pedagogical material or the absence or displacement of teachers are also at play.

UNICEF is working closely with the education cluster and the Ministry of Education in order to provide uninterrupted learning for affected children through temporary mechanisms such as informal community learning centres, and is also rolling out innovations such as the training of teachers through tablets.

UNICEF and partners also advocate for school reopening wherever conditions allow, which has led to the recent reopening of 150 schools. The Government of Mali has also endorsed the Safe Schools Declaration, committing to the protection and continuation of education in conflict.

UNICEF has also been working closely with the Government of Mali and its regional directorates, as well as other humanitarian actors to support the increasing numbers of displaced families and children in central Mali.

As of today, according to the Government and IOM, nearly 70,000 displaced people are registered in the Mopti region, mainly in areas close to the border with Burkina Faso. This is an increase of more than 13,000 people since the end of 2018. The region of Mopti now accommodates the vast majority of all IDPs in Mali (70%).

In the towns of Mopti and Sevare, which have seen an influx of displaced families since the 23 March attack, seven displacement sites have been set up.

Despite community resilience and sustained efforts of the Government and humanitarian actors, the overall situation for children in central Mali remains bleak, with fear and insecurity compromising the ability of families to move around, farm, trade, and access basic social services including health centres.

Rising food prices and the threat of food insecurity have also put additional pressure on vulnerable families and their livelihoods. In short, the protracted crisis in central Mali is impacting all aspects of children’s lives – jeopardizing children’s right to safety, protection, wellbeing, health and education.

Humanitarian actors are supporting the Government and communities to respond to needs, but the crisis in Mali remains one of the least funded in the world: UNICEF’s appeal for 2019 is only 16% funded. Without more support and funding, UNICEF and partners will not be able to bring critical assistance to the children that need it most in crisis-affected areas in the center and north of Mali.