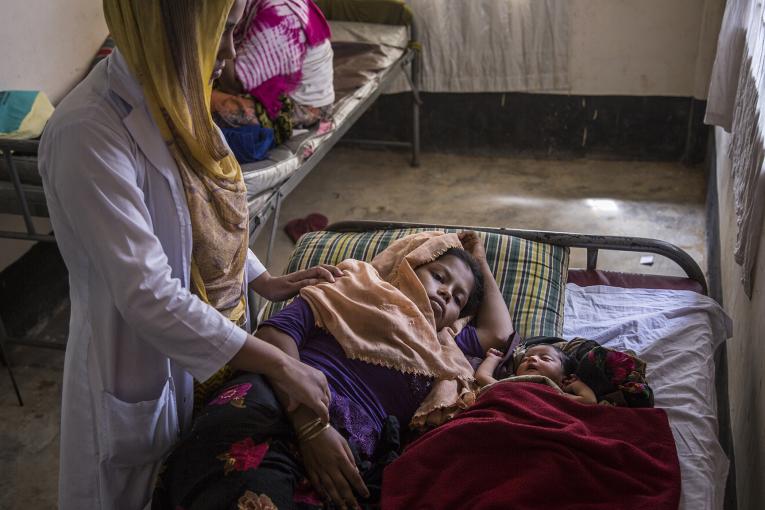 © UNICEF/UN0139593/LeMoyne
A midwife checks on exhausted new mother Hazera Begum, 18, who is recuperating next to her sleeping infant daughter, 3-day-old Kismat Ara, at the UNICEF-supported birthing centre in the Kutupalong camp for Rohingya refugees, in Cox’s Bazar, Bangladesh. October 2017

DHAKA/COX’S BAZAR/NEW YORK, 17 May 2018 – More than 16,000 Rohingya babies have been born in refugee camps and informal settlements in Cox’s Bazar, Bangladesh in the nine months since a spike in violence in Rakhine State, Myanmar forced thousands of families to flee their homes across the border, UNICEF said today.

“Around 60 babies a day are taking their first breath in appalling conditions, away from home, to mothers who have survived displacement, violence, trauma and, at times, rape,” said Edouard Beigbeder, UNICEF Representative in Bangladesh. “This is far from the best start in life.”

As new waves of violence started in Rakhine State in August last year, there were widespread reports of rape and sexual violence against women and girls.

Women and children who are survivors of sexual violence are among the most vulnerable and marginalised of the more than 800,000 Rohingya refugees in Cox’s Bazar, requiring specialised support and women and girls may not come forward due to the risk of stigmatisation and additional persecution.

“It is impossible to know the true number of babies who have been or will be born as a result of sexual violence,” added Mr Beigbeder. “But it is vital that each and every new and expectant mother and every new-born receive all the help and support they need.”

Of all babies born in the camps since September, only about 3,000 – or 1 in 5 – were delivered in health facilities. Estimates suggest that only 18 per cent of mothers currently give birth in health centers.

Working with partners, UNICEF is providing antenatal and post-natal care to mothers and their babies. UNICEF case management workers regularly visit mothers in their shelters to assess their situation, provide with support – more than 150 parent groups have been set up across the camps - and offer them referral services.

UNICEF has also mobilized almost 250 community volunteers to make sure that a growing number of women visit the health care facilities before and after giving birth.

UNICEF is also advocating for proper, legal birth registration for newborns, concerned that without this, babies will have trouble accessing the vital basic services they are entitled to.

The ‘invisibility’ of non-registered children increases their vulnerability and the risk that violations of their rights will go unnoticed. During times of conflict and unrest, providing newborn children with birth registration is a matter of urgent priority.

Children unregistered at birth or without identification documents are often excluded from accessing education, health care and social security. If children are separated from their families, reuniting them is made more difficult by the lack of official documentation. 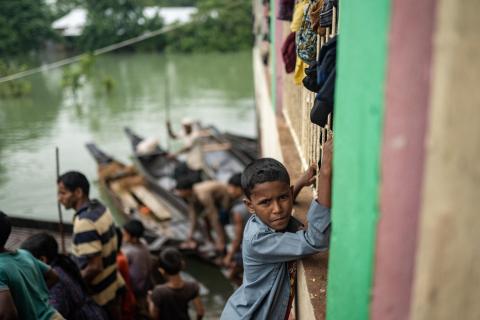 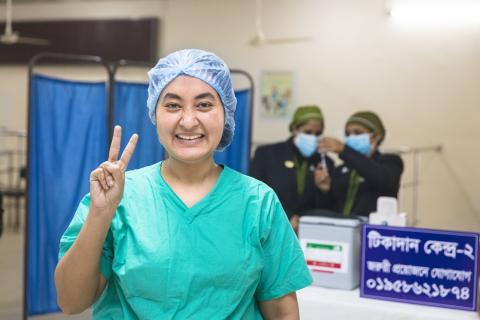