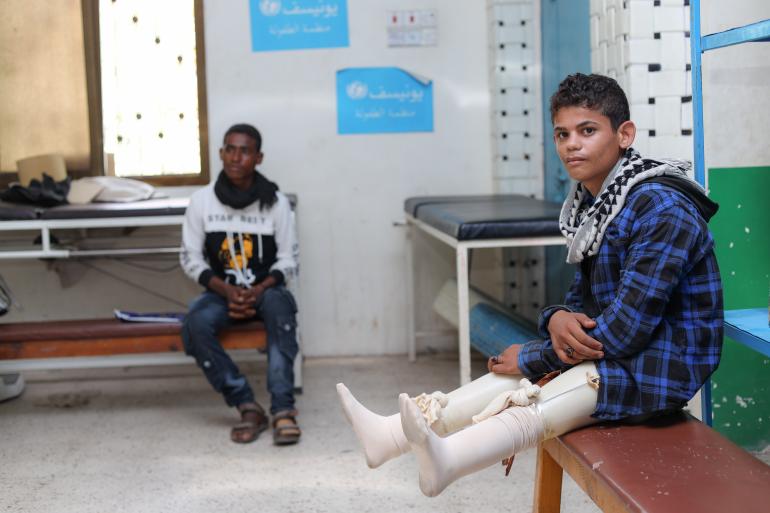 UNICEF/UN0538380/
Ibrahim wears his artificial limbs in the prosthetic centre in Aden, Yemen on 14 October 2021.

NEW YORK, 12 December 2022 – More than 11,000 children have now been killed or maimed as a result of the conflict in Yemen, according to UNICEF – an average of four a day since the escalation of the conflict in 2015. As these are only the UN-verified incidents, the true toll of this conflict is likely to be far higher.

While the UN-brokered truce led to a significant reduction in the intensity of the conflict, a further 62 children have been killed or injured between the end of the truce at the start of October and the end of November. At least 74 children were among the 164 people killed or injured by landmines and unexploded ordnance between July and September 2022 alone.

Almost eight years since the escalation of the conflict, more than 23.4 million people, including 12.9 million children, are in need of humanitarian assistance and protection – almost three-quarters of the entire population. An estimated 2.2 million children in Yemen are acutely malnourished, including nearly 540,000 children under the age of five suffering from severe acute malnutrition and are struggling to survive.

“For children like 7-month-old Yasin and his mother Saba, who I visited at a hospital in Aden, life has become a struggle for survival,” said UNICEF Executive Director Catherine Russell, who launched UNICEF’s Humanitarian Action for Children Appeal from Yemen last week. “Thousands of children have lost their lives, hundreds of thousands more remain at risk of death from preventable disease or starvation. Yasin is just one of too many severely malnourished children in Yemen. They all need immediate support as basic services have all but collapsed.”

Immunization coverage has stagnated nationally, with 28 per cent of children under 1 year of age missing routine vaccinations. Coupled with the lack of access to safe water, this puts children at extreme risk amid regular outbreaks of cholera, measles, diphtheria and other vaccine-preventable diseases.

At the same time, Yemen is facing a severe education crisis, leading to tremendous long-term consequences for children. Two million children are out of school, and this number could rise to 6 million children having their education disrupted as at least one out of four schools in Yemen are destroyed or partially damaged.

“If the children of Yemen are to have any chance of a decent future, then the parties to the conflict, the international community and all those with influence must ensure they are protected and supported,” said Russell. “That includes children like Mansour, who I met at a UNICEF-supported rehabilitation and prosthetics centre. His leg was amputated at the knee after he was shot by a sniper. No child should suffer that. The urgent renewal of the truce would be a positive first step that would allow critical humanitarian access. Ultimately, only a sustained peace will allow families to rebuild their shattered lives and begin to plan for the future.”

UNICEF urgently requires US$484.4 million to respond to the humanitarian crisis in Yemen in 2023. Lack of predictable funding for urgent interventions challenges the continuity of key services, putting children’s lives and well-being at risk.

Despite the challenges, in 2022 UNICEF was able to:

These are figures that the United Nations has been able to verify. The actual numbers are likely to be much higher. Between March 2015 and 30 September 2022: 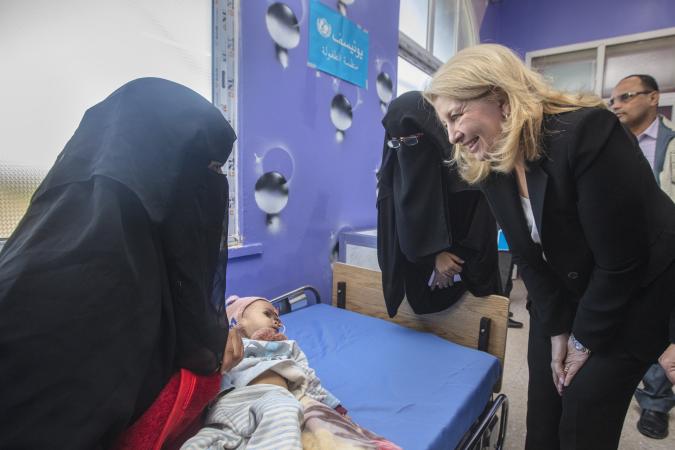