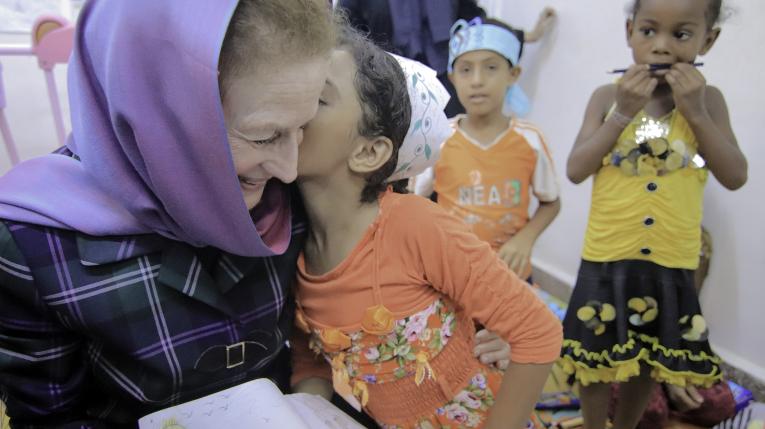 NEW YORK, 22 November 2018 - "The recent de-escalation in fighting in Hudaydah is providing a desperately needed respite to hundreds of thousands of civilians who remain in the city. We urge all parties to maintain it.

“At the same time, we remain deeply concerned for the safety and protection of civilians and civilian infrastructure. Hostilities over the last several weeks in Hudaydah have taken a steep toll, including on health facilities directly damaged in crossfire or occupied by armed groups.

“We are especially worried about Al Thawrah Hospital, which is the only facility in the city equipped to provide a full range of secondary and tertiary care. This facility is critical for millions of people in Hudaydah Governorate. Its services include a malnutrition treatment facility, two intensive care units that are providing intensive emergency care including for newborn babies, and a cholera treatment centre that has treated 1,615 patients since August 2018. More than 81,000 children were treated at the hospital in 2017, while over 45,000 have received treatment there so far this year.

“Since the lull in hostilities, Al Thawrah hospital has remained functional and accessible. However, front lines remain very close by, meaning any resumption of hostilities could quickly render the facility unusable. Already, Al Thawrah has been damaged several times during fighting before the lull. While other hospitals continue to operate in Hudaydah, none offer the level of care and services provided by Al Thawrah. Its continued operation is vital for the city and its surroundings.

“We remind all parties to the conflict of their obligation to abide by the fundamental rules of distinction and proportionality and to take constant care – at all times – to spare civilians and civilian infrastructure, including Al Thawrah Hospital and all other health facilities. We also call on the parties not to occupy or otherwise use civilian sites – including Al Thawrah – for military purposes. Parties to the conflict should also guarantee that patients, their family members and medical staff have safe passage to and from the hospital at all times.

“A durable cessation of hostilities – part of a package of five measures – would be a welcome first step. Full implementation of all five measures – a cessation of hostilities, protection of the supply of food and essential goods, support for the economy, increased funding for the response, and engagement by the parties with the Special Envoy to end the conflict – is essential to prevent potential catastrophe.”