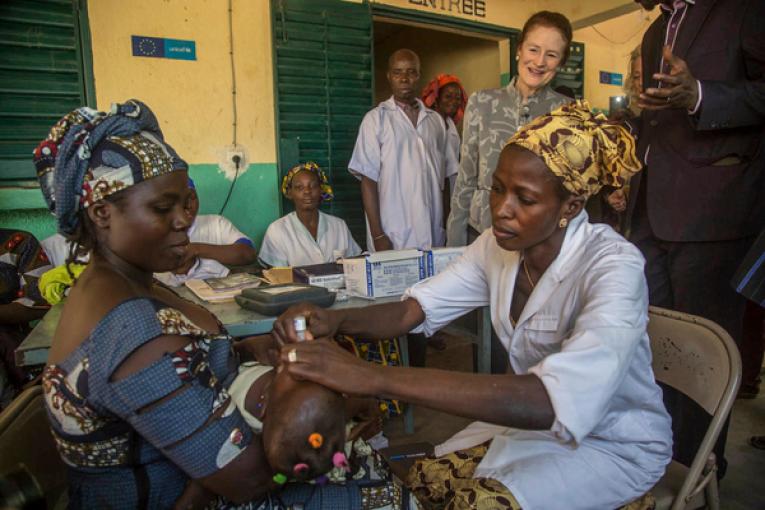 UNICEF/UN0212605/Keïta
UNICEF Executive Director Henrietta H. Fore watches as a child receives a vaccination during her visit to the health centre in the suburbs of Bamako, the capital of Mali.

Photos and broll available at: https://weshare.unicef.org/Package/2AMZIFVREB39

BAMAKO/DAKAR/NEW YORK, 29 May 2018 –  As the security situation in Mali continues to worsen, children are being denied the opportunity to survive, learn and thrive, UNICEF said today.

“The children of Mali are suffering in silence, away from the world’s attention,” UNICEF Executive Director Henrietta H. Fore said during a visit to the country. “Amid increasing violence, more children are going hungry, missing out on learning and dying in the first days of life.”

More than 850,000 children under the age of five are at risk of global acute malnutrition this year, including 274,000 facing severe malnutrition and at imminent risk of death. This represents a 34 per cent increase and is largely due to the worsening food security situation in parts of the country.

Severe acute malnutrition rates are highest in the conflict affected areas in the north, exceeding 15 per cent in Timbuktu, while limited donor interest has made it harder to acquire the necessary amounts of therapeutic food, critical to curing malnourished children.

Over a million children in Mali are currently out of primary school, a 30 per cent increase since 2009. To date, 750 schools remain closed in the northern and central parts of the country due to insecurity, affecting over 300,000 school-aged children. An additional 1 million children are out of secondary school.

With 1 in 28 newborns dying in the first month of life, Mali is in the top 10 countries with the highest newborn mortality rates in the world. Maternal mortality is also one of the highest globally, with 1 in 27 women likely to die from pregnancy-related causes.

During her visit to the nation’s capital on Monday, Fore stressed the importance of peacebuilding and social cohesion, including equal inclusion of girls in education, health care and protection, as paramount conditions for peace and development.

“If we wish to see a brighter future for children in Mali, investments in their wellbeing need to be made today,” said Fore, during a visit to a local school in the outskirts of Bamako. We must put children at the heart of our policies and peacebuilding efforts. Their future and very survival depend on it.”

Working with partners and through five field offices including in conflict areas, UNICEF is delivering health, water and sanitation, nutrition, education, and child protection services to children in inaccessible communities, with insecurity often hampering the ability to respond.

But funding remains scarce. Almost 80 per cent of UNICEF’s $37 million humanitarian appeal for 2018 remains unfunded. Additional resources are urgently needed to allow UNICEF to provide the children of Mali with the life-saving support they need.