Ukraine is facing the unprecedented dual challenge of coping with the effects of a seven-year armed conflict in the east and the COVID-19 pandemic. Although there is optimism regarding the new Government’s approach to resolving the conflict, the situation remains difficult for the 3.4 million people, including 1 million children, living in the Donetsk and Luhansk regions.

In this context of protracted conflict, civilians are bearing the brunt of the crisis, with direct threats to their physical and mental well-being and limited access to essential services. In one of the world's most mine-contaminated areas, fear of stepping on a landmine is a daily reality. Water and education infrastructure are continuously targeted, threatening children's access to safe water and schooling. Access to learning is also imperilled by weak teaching capacities and run-down infrastructure. In the context of active conflict, children and their families require continuous psychosocial support and protection services, including for gender-based violence, and victim assistance for accidents related to explosive remnants of war. Access to quality health services, especially for the most vulnerable, remains a daily challenge, exacerbated by the exodus of specialists.

The health system, including emergency medical services, which was already weak, has been severely challenged by the COVID-19 outbreak. Anecdotal reports indicate a lack of preparedness and awareness among medical professionals at all levels. Immunization rates have dropped, putting a large cohort of children at additional risk. More than 270,000 children under 5 years and their mothers are in need of critical health support, including immunization. Downward economic pressure is preventing the Government from enforcing meaningful quarantine measures, leading to the exponential growth of new confirmed cases.

In March, following lockdown decisions in eastern Ukraine, some 614,000 children were affected by school closures. While a distance education programme has been launched, many vulnerable children were excluded due to limited connectivity and lack of information technology. In addition, 42,000 children, including children with disabilities, were sent home from boarding schools without prior verification of their family conditions, putting them at further risk of abuse and neglect.

The COVID-19 pandemic has hit vulnerable groups particularly hard and exacerbated pre-existing inequalities. Children with disabilities and children in residential care institutions are among the most affected. The COVID-19 crisis and its consequences have given rise to new challenges for the already strained social welfare system in Ukraine, especially in the east.

In 2021, UNICEF’s strategy in Ukraine will continue to focus on protecting children and realizing child rights on both sides of the contact line, in government-controlled and non-government-controlled areas of Donetsk and Luhansk, while responding to the vulnerabilities caused by the dual crises of conflict and COVID-19.

To respond to the urgent needs of 820,000 people and children, UNICEF will strengthen social protection and psychosocial support, as well as health, education and WASH services, focusing on COVID-19 prevention measures. The capacities of local professionals, authorities and civil society actors will be enhanced to strengthen preparedness and accountability to affected children, in line with the Grand Bargain commitments. UNICEF will improve access to quality, inclusive, age- and gender-sensitive social services to increase families’ resilience to protection-related risks. UNICEF will work with humanitarian partners to target the most vulnerable, while also strengthening the educational and community-based systems supporting them. As the lead agency for the WASH cluster and the child protection sub-cluster, UNICEF will continue to advocate with parties to the conflict to comply with international humanitarian law and child rights standards. This includes intensifying advocacy efforts with the Government to implement the Safe Schools Declaration.

The COVID-19 pandemic has impacted safe access to all health services, including immunization and primary health care, as well as schools and social care institutions, necessitating specific protective measures for institutions and professionals. To address this, UNICEF will procure critical infection prevention and control supplies and personal protective equipment to ensure a safe environment at the facility level, and conduct training sessions for service providers. To reduce the transmission of COVID-19, UNICEF will continue its robust risk communication activities to raise awareness and increase knowledge through multimedia channels, targeting care providers, parents/caregivers and the general public. This is particularly critical as handwashing and good hygiene practices are essential to COVID-19 prevention. UNICEF and its partners will also increase access to hygiene supplies and drinking water. Advocacy will be conducted at the national and local levels, including in government-controlled and non-government-controlled areas to facilitate the provision of essential and quality services for children and women. These system strengthening actions by UNICEF will directly contribute to improving the linkages between humanitarian action and development programmes, which will in turn benefit the most vulnerable.

Humanitarian Action is at the core of UNICEF’s mandate to realize the rights of every child. This edition of Humanitarian Action for Children – UNICEF’s annual humanitarian fundraising appeal – describes the ongoing crises affecting children in Ukraine; the strategies that we are using to respond to these situations; and the donor support that is essential in this response. 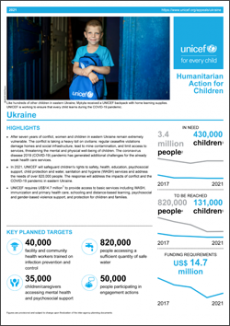 Download the full appeal to find out more about UNICEF’s work and targets for Ukraine.
Download file
(PDF, 4,13 MB)