Mozambique was affected by two category 4 cyclones in 2019: Cyclone Idai in March, which affected the central region; and Cyclone Kenneth in April, which affected the northern region and led to severe flooding. These events were the worst natural disasters in southern Africa in nearly two decades, resulting in 648 deaths. More than 2.2 million people were affected, including 1.2 million children, and over 200,000 people were displaced in the central and northern regions. The cyclones also impacted 400,000 students and 93 health facilities.

Overall, some 2.5 million people in Mozambique require humanitarian assistance. This includes 2 million people projected to be food insecure in the coming months due to the cyclones and poor rainfall in the southern region; 500,000 people living in partially damaged houses; and 80,000 people in 66 resettlement sites. An estimated 60,000 people have been displaced due to the deteriorating security situation in Cabo Delgado province. In addition, some 67,500 children under 5 years are in need of treatment for acute malnutrition. Access and logistical constraints remain major challenges in all affected areas.

978,000 people with access to a sufficient quantity of safe water

993,082 children aged 6 to 59 months screened for acute malnutrition and receiving vitamin A supplementation

In line with the revised 2019–2020 Humanitarian Response Plan and the Disaster Recovery Framework, UNICEF is providing life-saving and recovery assistance in cyclone-and flood-affected provinces in Mozambique. A UNICEF field presence has been established in the most affected cities of Chimoio, Beira and Pemba to ensure operational efficiency and timely response. UNICEF is using an integrated response to meet the needs of affected children in both rural and urban areas, and targeting displaced households living in resettlement centres. Cash-/voucher-based assistance is planned where relevant.

UNICEF is enhancing its capacity to provide operational support and undertake higher frequency monitoring and quality assurance for governmental agencies and partners, especially for outreach interventions in hard-to-reach areas. Cluster coordination is being strengthened at both the national and decentralized levels. Innovative technological platforms and approaches are being used for assessment, data collection, monitoring, information sharing and real-time feedback.

UNICEF is working towards strengthening the linkages between humanitarian action and development programmes, and also plans to invest in resilience building in the recovery phase by adopting a risk-informed approach. UNICEF will continue to strengthen protection from sexual exploitation and abuse and reinforce coordination structures to ensure crisis-affected populations have access to reporting mechanisms and assistance.

Humanitarian Action is at the core of UNICEF’s mandate to realize the rights of every child. This edition of Humanitarian Action for Children – UNICEF’s annual humanitarian fundraising appeal – describes the ongoing crises affecting children in Mozambique; the strategies that we are using to respond to these situations; and the donor support that is essential in this response. 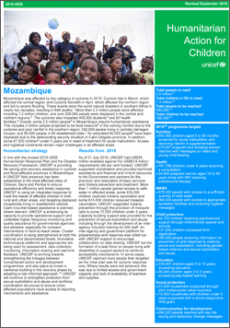 Download the full appeal to find out more about UNICEF’s work and targets for Mozambique.
Download file
(PDF, 4,00 MB)