Beating Ebola in the Democratic Republic of Congo starts in the classroom. But it doesn’t end there.

By Typhaine Daems and Yves Willemot

BENI, Democratic Republic of Congo – Students in much of the world might already be looking forward to an end of year break. But Jauspin Kambale Mulyatha, a primary school teacher in the city of Beni in the northeast of Democratic Republic of Congo (DRC), had an unusual – and worrying – problem just days into the school year: barely anyone was there.

Jauspin says that a week after classes began, only around a quarter of his students at Kasanga Primary School had shown up for class. The reason could be found just an hour’s drive away from the school, in Mangina, where an Ebola outbreak had been discovered. Parents were worried about sending their children to school, while many schools were closed completely.

“We’d heard Ebola had killed people in Equateur Province,” Jauspin says, referring to recent deaths in western DRC between May and July 2018. And although those deaths had occurred more than 1,000 miles away from Beni, fear in the community ran high.

It was in part with such concerns in mind that UNICEF organized a major information campaign before the semester started for school principals and teachers as part of its efforts to bolster the on-the-ground response in North Kivu Province and neighbouring Ituri Province.

“As a teacher, I always say to parents that school is an important actor in the fight against Ebola.”

Jauspin is one of nearly 4,000 people who participated, learning about the virus, how it is transmitted, and what to do if someone shows symptoms. The educators also learned how to raise awareness among students without causing panic.

Equipped with the information shared in UNICEF’s campaign, Jauspin discussed with his students, using posters and other visual aids, the importance of washing hands to avoid contamination. “The children listened attentively, and have been able to incorporate these important practices into their day-to-day lives,” Jauspin says, adding that he hopes they will apply what they’ve learned at home – and encourage their parents to do the same.

UNICEF had installed hand-washing facilities in around 430 schools and provided access to safe drinking water for around 850,000 people in Ituri and North Kivu as of mid-November. But working with schools is just one element of UNICEF’s efforts to mobilize communities in the fight against Ebola.

As of November, there had been more than 300 confirmed cases of the virus from the recent outbreak in North Kivu and neighbouring Ituri Province. But Daniel Merusyhwa, a nutritionist at the Beni Ebola Treatment Centre, says he isn’t afraid of the virus.

“I know what to do to protect myself,” he says.

Recovery: It’s about mind and body

Daniel is one of the nutritionists trained by UNICEF to provide support. The treatment centres offer care to those infected with the virus, and work with affected children to help minimize the psychological impact that Ebola has on their communities. But treating those with the virus isn’t the only vital role that the centres play – helping survivors recover, and eventually rejoin their communities, is important, too.

Since August, 140 patients who tested positive have survived – and proper nutrition was a crucial factor.

“When a patient’s appetite returns we know they are on the road to recovery,” Daniel says. “The right nutrition allows for more rapid healing.”

“Ebola is a terrible disease, but sometimes things go well. That’s what motivates me to continue.”

Proper nutrition isn’t only essential for patients themselves – it can also be crucial in ensuring their children stay healthy. Daniel explains, for example, how he recently helped a baby whose parents were in the treatment centre by making sure the infant was appropriately fed during separation. Fortunately, both parents recovered, and, thanks in part to Daniel’s efforts, they were able to return home with a healthy baby.

“Ebola is a terrible disease, but sometimes things go well,” Daniel says. “That’s what motivates me to continue.”

Of course, recovering from Ebola isn’t just about healing physically. Psychologist Sylvie Waridi works with Daniel at the treatment centre, providing psychological support for child patients. “They ask a lot of questions about the disease and why they are here,” she explains. “I talk to them, comfort them and listen to their worries,” she says.

Eight-year-old twins Gloria* and Emmanuel*, for example, were recently admitted to the centre after exhibiting Ebola-like symptoms. “It wasn’t easy for them to understand what was happening. Fortunately, they could also support each other,” says Sylvie, one of more than 200 psychosocial workers trained by UNICEF and its partners as of September 2018 to support those affected by Ebola.

She says the twins’ mother was certain she was going to lose her children, even while their father held out hope they would survive. “Every morning, he stood by the fence at the centre until nightfall, hoping his children could see him,” Sylvie says.

The father’s patience was rewarded in the best way possible: After six days under observation and two negative tests, the children were released, Ebola-free. But challenges remain for the family.

Those discharged from the Ebola centre are often met with stigma and fear in their communities, meaning returning home isn’t always easy. With that in mind, and armed with the lessons of her UNICEF training, Sylvie prepared the twins for the next stage – and the reaction they might receive from others in the community.

Since then, she has paid regular visits to the neighbourhood to ensure that Gloria and Emmanuel have been treated well, taking time to explain to the twins’ neighbours what the illness is, why they were admitted to the centre, and why they have been reunited – safely – with their family.

“Each time we discharge a child, we are filled with joy,” Sylvie says. With the training that UNICEF is providing, the hope is that this joy can be matched by the children themselves as they and their families try to return to everyday life after surviving Ebola.

*Names have been changed to protect the identity of children. 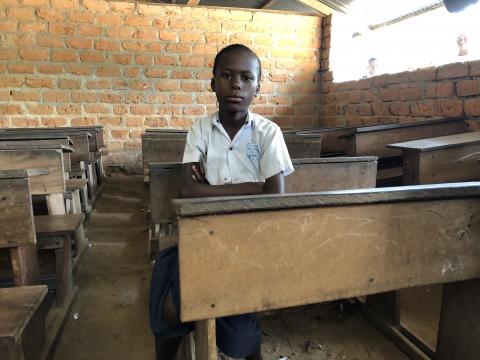 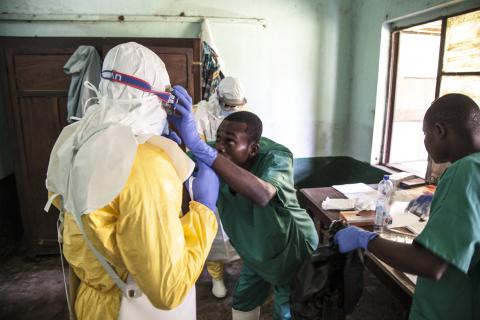 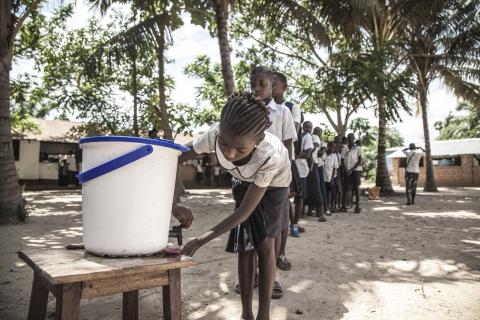 Ebola outbreak in the DRC: UNICEF mobilizes communication specialists in support of the vaccination campaign
Visit the page