By Monica Awad and Basma Ourfali

In a country ravaged by conflict, Syrian children with disabilities face tremendous day-to-day challenges. A UNICEF-supported cash assistance programme is providing much-needed support to their families.

ALEPPO, Syrian Arab Republic, 14 September 2017 – Bashar is one of 2.8 million Syrian children forced to flee their homes because of the intense violence. For Bashar, life was already tough and being displaced added to his daily challenges.

The 12-year-old was born with Down’s syndrome, a genetic disorder that causes learning disabilities and growth delays. Bashar’s father died when he was nine years old, leaving him, his two siblings and his mother to cope with the horrors of war.

“I was not able to send Bashar to school, because there are no special education schools close by,” says Bashar’s mother Hanan, sitting in an unfinished building that they are currently using as a shelter.

“Instead, I taught Bashar the basics of sewing,” she says. Using torn pieces of coloured fabrics, Bashar is now able to bring puppets to life.

As a child with a disability, Bashar is often judged by what he lacks, rather than what he is able to do.

“In war-torn Syria, children with disabilities are one of the most excluded groups,” says Fran Equiza, UNICEF Syria Representative. “Livelihoods have been devastated by the conflict and families struggle to make ends meet, which can be even more challenging when caring for a child with a disability.”

An estimated 85 per cent of the population now lives in poverty, with 69 per cent in extreme poverty – living on less than US$2 per day.

Despite all the challenges, Bashar is still ambitious. “I want to be a tailor,” he says, his eyes sparkling with optimism.

To help children like Bashar realize their dreams, UNICEF provides cash assistance to some of the most vulnerable families. The funding comes from the German Government and other donors, and is part of a larger social protection programme.

The aim is to alleviate the impact of poverty on families, and to support their role in child care and improve their access to basic services. It is an innovative social protection scheme targeting children with disabilities, reducing their exposure to risks, and helping their families develop positive ways of coping.

According to recent research by the Overseas Development Institute, direct cash grants to households can help to protect poor families and make humanitarian response faster and more flexible.

“The people of Syria have suffered enough. Providing cash assistance can at least make life a little easier for some of the most vulnerable families,” says Equiza. “Families can make choices on how to use these resources in the best interests of their children,” he adds.

Bashar’s family is one of nearly 9,000 families of children with disabilities in Aleppo, Latakia, Tartous and rural Damascus who are targeted to receive cash assistance through the UNICEF-supported social protection scheme. His family receives US$80 every two months.

“Now I use the cash to feed Bashar properly and to cover his transport costs to go to school,” says Hanan. “I am so happy.”

Firas, 17, is another young Syrian who is benefitting from cash assistance. He lost his father and both of his legs on the same day of intense fighting in east Aleppo.
“I was helping my father at his small shop when a mortar landed, killing my father, and leaving me severely injured,” he says.

Firas’s mother was able to give him a small monthly allowance as part of the UNICEF-supported cash assistance. He saved it up and started a small business selling clothes.

UNICEF also referred Firas to a health facility, where he underwent surgery. He will be receiving a prosthesis within a month through a local non-governmental organization.
Cash assistance for families like Bashar’s and Firas’s can transform their lives and have a long lasting impact, providing them with opportunities to realise their full potential.

“Once I receive my prosthesis, I will be able to walk again,” says Firas with a smile. 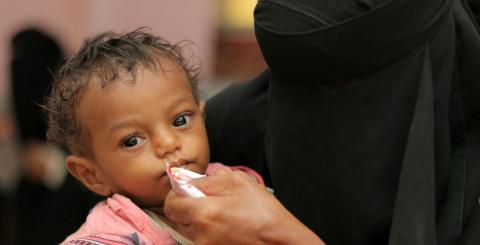