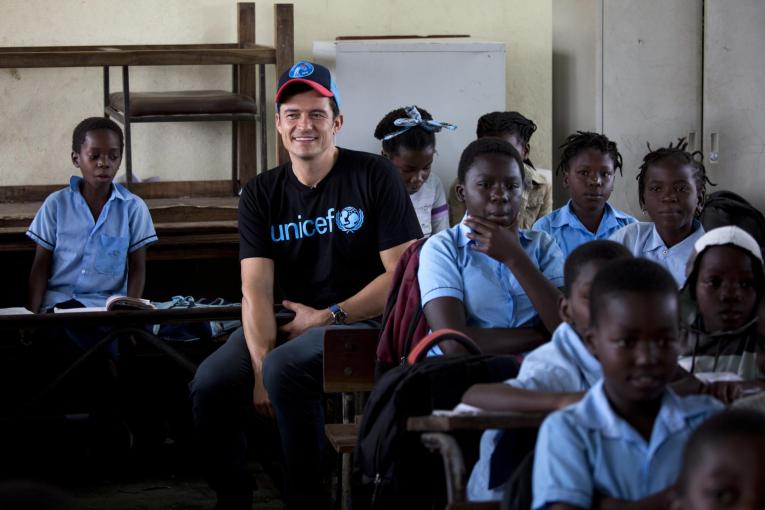 The actor travelled to Beira, one of the areas worst-affected by Cyclone Idai, which killed over 600 people and destroyed nearly 240,000 homes when it made landfall in March.

Sitting on the sandy floor of a tent at the Samora Machel site for internally displaced people in Beira, Bloom listened to the devastating stories of children who lost their homes, schools and belongings in the cyclone. Thirteen-year-old Alzina Lopes described the moment Cyclone Idai made landfall, leaving her stranded in waist-deep floodwaters. Alzina told Bloom she wants to return to school, and dreams of becoming a traffic officer.

“It’s remarkable to see children, who have been through so much, gain a sense of normality in the safe spaces set up by UNICEF, where they are free to sing, dance, play and just be children,” said Bloom. “These are children and young people with dreams, they want to be in school. But almost everyone I’ve met here has lost their classrooms, their books and crucial identification documents due to the cyclones. Without IDs they are unregistered, almost invisible and vulnerable to exploitation. It is heartbreaking.”

UNICEF is supporting families affected by the cyclones to either return home or relocate to safer places. UNICEF is also providing healthcare, nutrition, education, water and sanitation, and protection services. In the days following the storm, UNICEF and its partners restored water supplies to thousands of people in Beira and procured and administered 1 million doses of the cholera vaccine, thereby curbing a large cholera outbreak.

Bloom also visited the Mutua resettlement area in Beira, currently home to around 1,500 people affected by the cyclones, nearly half of whom are children. Bloom danced and sang with young children and spoke to them about their hopes and dreams for the future.

The actor also visited a primary school in Beira, which was damaged in the cyclone and later repaired by the students themselves.

Wrapping up his trip to the storm-ravaged city, Bloom spent an afternoon with young volunteers at an interfaith group. Many of them told the actor that the pain and suffering they saw after the cyclones strengthened their resolve to help others. The group gathered on the beachfront, a symbolic venue, as the volunteers pointed out that the powerful storm emerged from the sea.

“Thousands of children and families in Mozambique have seen their lives upended by these devastating cyclones and it’s going to be a long road back,” said UNICEF Mozambique Representative, Marcoluigi Corsi. “We’re working on the ground with our partners to help get children and their families back on their feet by providing support in healthcare, nutrition, education and protection. As part of the recovery effort, we’re also trying to help affected communities become more resilient to future weather-related events that could happen more often because of climate change.”

UNICEF has launched an appeal for US$122 million to support its humanitarian response for children and families devastated by the storm and its aftermath in Mozambique, Zimbabwe and Malawi. 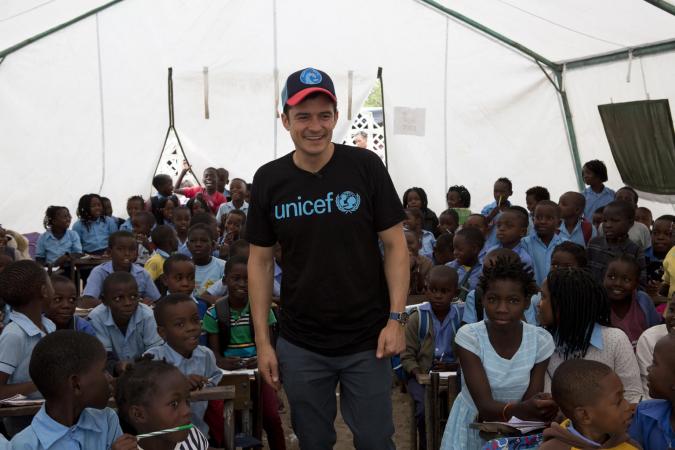 UNICEF Goodwill Ambassador Orlando Bloom meets with students at a primary school in Beira, Mozambique, that was partly destroyed by Cyclone Idai in March.