This is a summary of what was said by Henrietta Fore, UNICEF Executive Director – to whom quoted text may be attributed – at today's Security Council Open Debate at the United Nations in New York. Checked against delivery. 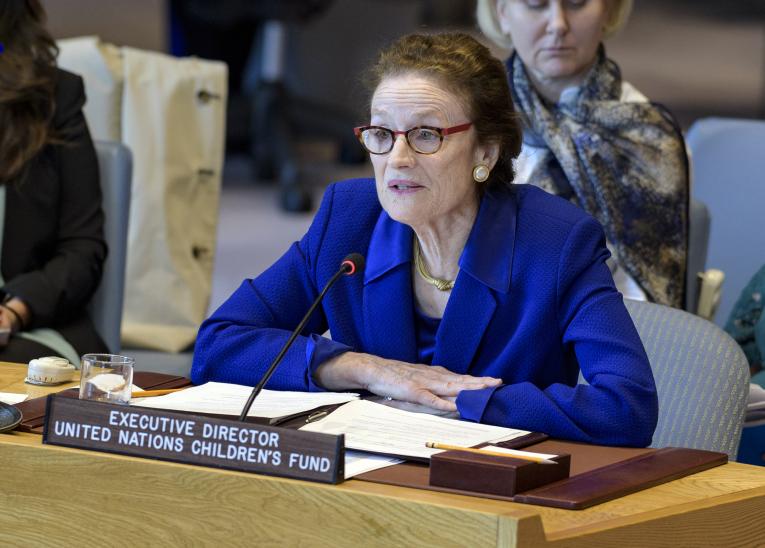 “Thank you to France for convening this debate.

“And welcome Mariam — our young civil society briefer — for being here. We have much to learn from your experiences.

“There are few children as vulnerable as those living through armed conflict situations.

“Whether they’re trapped by the fighting…on the move as migrants, refugees or IDPs…part of the fighting itself…or being detained because of perceived or actual links to armed groups — these children are, first and foremost, victims of circumstances beyond their control.

“They are, first and foremost, children.

“The voice and support of this Council can be instrumental in supporting these children. You can help return what has been so cruelly taken from them by conflict — the simple gift of a normal childhood.

“Fifteen years ago, the global community gathered around these needs.

“Resolution 1612, and the establishment of the CAAC agenda and the monitoring and reporting mechanism, or MRM, represented a milestone in living up to our commitment to protecting all children.

“UNICEF has been there from the start — pushing this agenda forward and co-chairing country task forces on monitoring and reporting in 14 countries.

“Along with the Secretary-General’s annual report, we are, together, protecting children and holding parties to conflict to account.

“Since then, tens of thousands of children have been released from the ranks of armed forces and armed groups.

“In the past three years alone, UNICEF has helped release nearly 37,000 of them and supported them with release and reintegration programming in 19 countries.

“Child survivors are finally getting the services they need to recover and to reintegrate.

“Our efforts have raised public awareness — and often, public alarm — about the plight of these children, and the need to support them.

“And together, we’ve sent a clear message to those who would violate children’s rights — these actions are illegal, immoral and unacceptable. And the global community is committed to holding them to account. The culture of impunity must end.

“Countries now have a number of tools and innovative frameworks to guide their work in this area.

“The Convention on the Rights of the Child is now joined by a number of important instruments:

“Guided by these frameworks, many states have gone one step further and brought these commitments to life in their laws and regulations.

“Last year, the Philippines adopted the Children in Situations of Armed Conflict Law. It criminalizes the six grave violations, provides special protections for children in armed conflict, and establishes penalties for violations.

“And in at least five countries — including Denmark, the UK, and New Zealand — military manuals and directives now reflect the Safe Schools Declaration and Guidelines.

“But these instruments are only as effective as the global will to use them.

“And so we call on all states to endorse and reflect them across their legal frameworks.

“Because we have more work to do.

“We continue to see appallingly high numbers of verified violations against children.

“Over the last 15 years, the MRM has documented a shocking 250,000 grave violations against children in armed conflict, including:

“And these are just the verified cases. The actual numbers are certainly much higher.

“COVID-19 adds a new urgency to this work.

“As the pandemic spreads, health care facilities have been damaged or destroyed by conflict.

“Services have been suspended.

“Children are missing out on basic medical care — including vaccinations.

“Water and sanitation systems have been damaged or destroyed altogether — making it impossible for children to wash their hands.

“Some 1.5 billion children are out of school. In conflicts, these children are at a double disadvantage, missing out on an education, and finding themselves at increased risk of violence, abuse, child marriage and recruitment to armed groups.

“And far too often, parties to conflict are using the pandemic and the need to reach and support children — particularly those on the move — for political advantage.

“Children are not pawns or bargaining chips. This must stop.

“To address these growing needs, we need the support and united voice of your Council to call for action in five key areas.

“First — We need your influence to urge the 50 parties to conflict who have not yet signed actions plans to do so. We need action, not words — and signing these plans is a demonstration of real commitment. Help the UN create space for dialogue to bring these plans to life. These plans should increasingly address all six grave violations, instead of primarily recruitment and use. The action plan signed in South Sudan is a good model to follow.

“Second — We call for the immediate release of all children in detention for their recruitment and use, or alleged association with parties to conflict. These children are victims, first and foremost — including those who may have committed crimes. They’re also at acute risk of contracting COVID-19, and must be handed over to child protection actors, like UNICEF.

“Third — UNICEF calls on member states to bring nationals and their children home. Repatriate them. These children have a right to access protection, basic services, education and reintegration services.

“This includes the thousands of children stranded in northeast Syria. Young lives who are shunned and deprived of liberty because of perceived or actual links to groups designated as terrorists.

“After all they’ve experienced, they need protection and support.

“Instead, they’ve been met with ostracization and rejection. They’ve been locked up. Some have had their right to nationality denied or stripped away altogether.

“As a world we must not accept this. We must support these children.

“Fourth — We call on Member States to invest in education and vocational training for reintegrated children. This is not only their right, it is the right thing to do — education provides a pathway to hope, a better life and social cohesion.

“Beyond investments, we also call for all attacks on education facilities to stop. Last year saw 494* verified attacks on schools — among the 13,000 since the MRM began. And once again, these numbers are likely much higher. We must protect this essential infrastructure.

“And fifth — we call for urgent action to respect and protect water and sanitation infrastructure. Water is a basic human right, and sanitation is the first line of defense against diseases like COVID-19 but also cholera, as well as malnutrition.

"UNICEF urges this council to use its influence to build on the many successes over the last 15 years and give every child the protection and support they deserve.

“Because they are children first and foremost.

“If we fail them, we fail the future. We fail humanity. And we fail in our duty to leave the world a better, more peaceful place than we found it.” 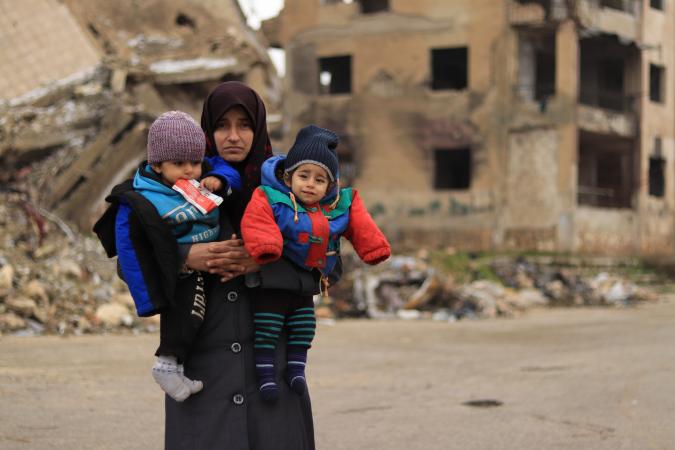