KINSHASA, 6 June 2020 – UNICEF denounces the attack that killed 16 people, including five girls under the age of 15, on 3 June in Ituri Province in eastern Democratic Republic of the Congo (DRC).

“We condemn in the strongest possible terms this attack on innocent children,” said Edouard Beigbeder, UNICEF Representative in the DRC. "We call on all parties to respect the rights of women and children.”

According to UN-verified reports, the attack took place in Moussa, a village in the Djugu area, north of the Ituri capital Bunia. The 16 victims were formerly displaced persons who had returned to the village and were killed in an attack using gunfire and knives. As a result, dozens of people have fled Moussa and taken shelter in neighbouring villages.

More than 300 people have now died as a result of the ongoing violence in Ituri Province since the beginning of the year. During April and May alone, UNICEF has received more than 100 allegations of serious child rights violations, such as rape, killing and maiming, and attacks on schools and health centres in Ituri.

Last month UNICEF warned that the security situation in Ituri is deteriorating fast and called on the international community and the Government of DRC to act quickly to avert a crisis that will forcibly uproot and endanger even more children.

Over 200,000 people, the majority of them children, have fled intensifying violence in Djugu, Mahagi and Irumu areas in Ituri Province since the beginning of the year. They sought shelter in host communities and extremely overcrowded displacement sites in and around Bunia. 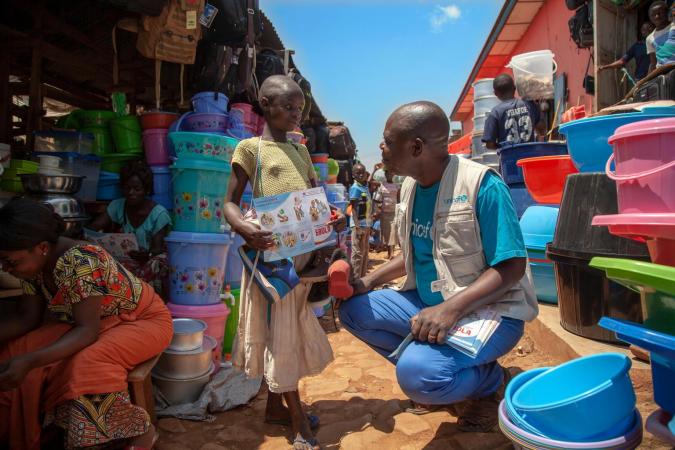 Jean-Pierre Masuku, UNICEF’s Ebola Outreach Officer in North Kivu in The Democratic Republic of the Congo, discusses Ebola prevention with a girl in Ebola-affected Beni.