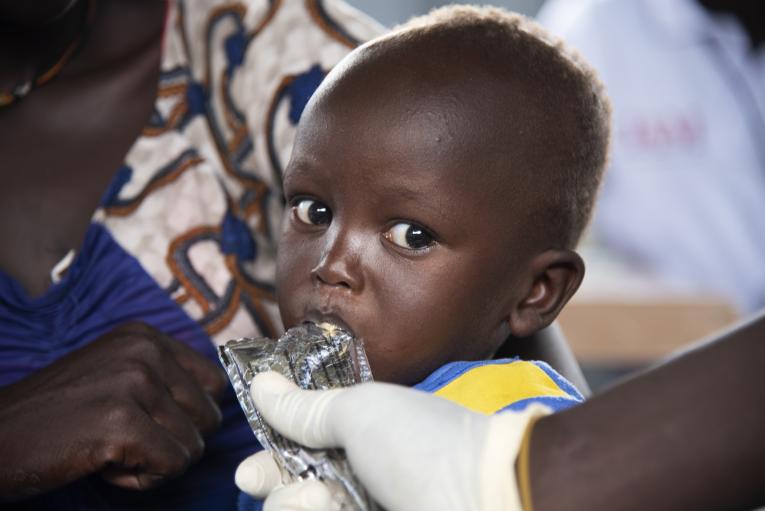 UNICEF/UNI375881/Ryeng
17-month-old Ajaba Ombacha is assessed to be suffering from severe acute malnutrition and is now doing an appetite test in the examination room in a flooded Verteth. September 2020

JUBA, 18 December 2020 – Three United Nations organizations are calling for immediate humanitarian access to parts of South Sudan’s Pibor County in Jonglei State, where people have run out of food and are facing catastrophic levels of hunger according to a new Integrated Food Security Phase Classification (IPC) report released today.

The high levels of hunger are being driven by insecurity, the effects of COVID-19, the economic crisis, and the impact of flooding on livelihoods, the report said. Humanitarian assistance is needed to save lives and avert a total collapse of livelihoods in hard-to-reach areas.

“We call on all parties to stop the violence and to ensure safe humanitarian access in order to prevent an already dire situation from turning into a full-blown catastrophe,” FAO Representative in South Sudan Meshack Malo said.

“We are extremely concerned about the increased numbers of children suffering from severe acute malnutrition. These children need urgent treatment to prevent them from dying. The data leave us with no doubt about the sense of urgency for all of us - Government, donor community and humanitarian actors - to join hands and ensure all these children get the treatment they need. At the same time, we need to invest more in actions to prevent children from becoming malnourished in the first place,” UNICEF Representative in South Sudan Mohamed Ayoya said.

“WFP is extremely worried about the rising numbers of people suffering because of the lack of sufficient food and nutrition, intensified conflict, unprecedented flooding and high food prices. The coming year will be extremely tough, but we are determined to do all we can to reach more people for longer periods of time," said Makena Walker, Deputy Country Director of the World Food Programme in South Sudan.

Figures in today’s report estimate that between October and November, 6.5 million people in South Sudan faced severe acute food insecurity and are in need of urgent assistance. This number is projected to grow to 7.24 million between April and July 2021.

Today’s report comes after two independent reports published by the IPC Global Support Unit last week which indicated that tens of thousands of people are likely to face famine conditions in Pibor county. In this situation, many families are experiencing high levels of acute malnutrition and even mortality. In another five counties (Akobo, Aweil South, Tonj East, Tonj North and Tonj South), some communities are facing catastrophic conditions, the independent analysis found.

Around 1.4 million children aged between 6 months and 5 years are expected to be acutely malnourished in 2021 and will need life-saving treatment, according to today’s report. This includes 313 000 children suffering from severe acute malnutrition and more than a million children suffering from moderate acute malnutrition. At the same time, 483 000 pregnant or breastfeeding women are acutely malnourished and in need of treatment.

WFP has already begun scaling up its lifesaving food and nutritional assistance to critically food insecure areas in Pibor County as well as other areas of concern, extending its humanitarian response beyond the usual lean season and increasing the number of vulnerable people who need support. In the past two months, WFP has extended its food assistance to nearly 80,000 people in Pibor County. Meanwhile, in Akobo East more than 40,000 people are currently receiving food assistance. WFP will continue to scale up its emergency food response working with partners to build community resilience and development. In total, WFP has provided food assistance to five million people in need in South Sudan in 2020.

UNICEF will further scale up its interventions supporting therapeutic treatment and stabilization centres in the most affected counties to protect and save children’s lives. This year, UNICEF has already treated 170,000 children affected by severe acute malnutrition, with a 94 per cent recovery rate. Further expansion of services is now urgently needed - including to insecure areas - for the treatment of severe acute malnutrition. UNICEF will continue to address the underlying causes of malnutrition such as malaria and diarrheal diseases caused by a lack of clean water, sanitation and hygiene, and investing in prevention of malnutrition through the promotion of breastfeeding and good feeding practices for the young child.

FAO’s priority is to assist farming and agro-pastoral communities to increase their production and preserve their livelihoods. So far in 2020, over 100 000 farming families have received support to grow their own food from seeds, and more than 5 million animals have been vaccinated and treated to assist 164 000 households. FAO has also distributed 800 tonnes of emergency animal feed for critical animal stocks, especially in flood-affected locations. 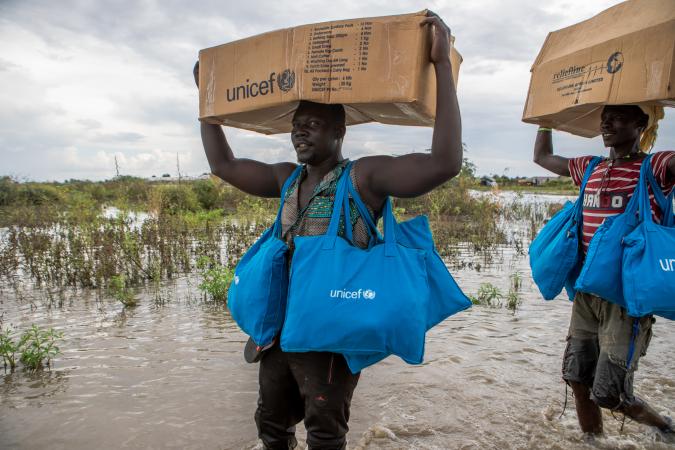