NEW YORK, 3 February 2017 – A powerful new UNICEF film presenting the parallel stories of a young Syrian refugee and a World War II child refugee was released today as a stark illustration of the challenges that refugee children continue to face.

The 120-second film, created with 180 Amsterdam, switches between the stories of Ahmed, 12, from Damascus in Syria, and Harry, 92, from Berlin, Germany. During the film, the two tell their individual stories of being forced to flee their homes and their harrowing journeys in search of safety. Despite being separated by over 70 years, the two stories contain many similarities, and the film interposes footage of Syrian refugees with historical footage from World War II.

In the film, Ahmed and Harry describe horrific details of their experiences, including attacks on schools and homes, being forced to flee in fear of their lives, and dangerous journeys on land and sea.
Harry finally found sanctuary in the United Kingdom, where he has lived ever since, whilst Ahmed reached safety in Sweden, where he was reunited with his family and is now back in school.

Across the globe, nearly 50 million children have been uprooted – 28 million of them driven from their homes by conflicts not of their making, and millions more migrating in the hope of finding a better, safer life.

Often traumatized by the conflicts and violence they are fleeing, they face further dangers along the way, including death and injury during perilous land and sea journeys, malnourishment and dehydration, trafficking, kidnapping, rape and even murder.

“The needs of refugees have never been greater. Now, more than ever, they need our support. We hope that this video will serve as a reminder that behind the headlines are the stories of individual children. Not refugees, not migrants, but children, whose only dream is safety, and the chance of a brighter future” said UNICEF Director Paloma Escudero. 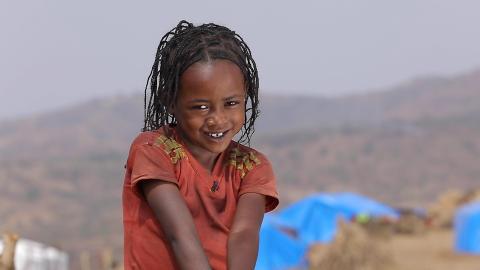 Gabezech and her family have been displaced by violence in Ethiopia’s Konso zone. Unable to go to school, she’s finding comfort with friends

G7 announces pledges of 870 Million COVID-19 vaccine doses, of which at least half to be delivered by the end of 2021