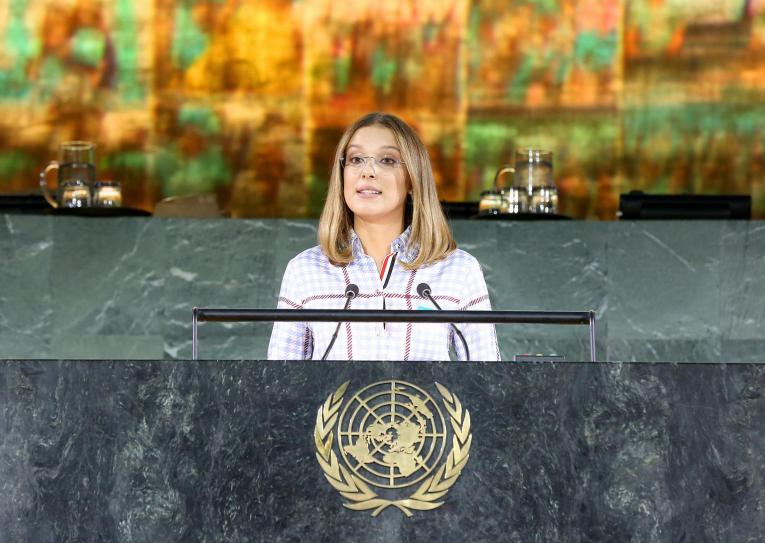 You’ve been such an inspiration to me in my work as a UNICEF Goodwill Ambassador.

Like you, I’m in this for the long haul.

Now, three years later, it’s great to be back with David to mark another milestone — the 30th anniversary of the Convention on the Rights of the Child.

In world capitals — in buildings like this — adults talk about children’s rights.

But today, young people don’t want to be talked about.

They want to do the talking.

Millions of people responded to UNICEF surveys and petitions about what the Convention on the Rights of the Child meant to them.

In the words of one young person: “Be an active voice. Don’t let things go unnoticed.”

So today, I want to talk about an issue that is very personal to me.

Something that so often goes unnoticed — but causes real suffering.

Like David, I’ve been very lucky in my life.

I take nothing for granted.

But I also know what it feels like to be vulnerable.

At school, I was bullied by a group of students.

School used to be a safe place.

Now I was scared to go.

Like millions of other girls around the world, I’ve also been bullied and harassed online.

It’s a terrifying feeling to look at your phone and see that the messages that people are sending you are filled with anger, hate and even threats.

So many of these are from strangers. Anonymous trolls on the internet.

Like all bullies, they gain their power by taking power away from others.

By making them feel as scared and helpless as I did.

I was lucky. With the help of my friends, family and people around me, I was able to overcome these negative feelings and take my power back.

But millions of children aren’t so lucky.

They’re still struggling in the darkness.

Wrestling with fear. With insecurity.

And in the most extreme cases — and in areas around the world where conflict and violence are daily threats — it can lead to self-harm. Sickness. And even suicide.

Today at UNICEF, I talk a lot about kindness.

About how we can shape positive environments in schools.

How we can support each other online.

I’m convinced that social media doesn’t have to be a place of fear, bullying and harassment.

It can bring people together. It can be a place of love and support.

Somewhere in the world today — right now — a teenaged girl is being bullied online.

In my role as Goodwill Ambassador, I will continue talking about this issue wherever I go.

And I will take every opportunity to spread the word about how we can end bullying, online and off.

But I’m not alone in speaking about children’s rights.

I’m joined by tens of thousands of other young people from every part of the world, demanding to be heard.

She told them that the adults of the world had failed to act on climate change.

She’s carrying that message around the world.

And now, Greta’s message is being echoed every Friday, when thousands of children and young people leave their classrooms to protest the world’s inaction on climate change.

Young people like her are shouting for world leaders to hear, to listen and to act.

Every one of you here today can be the loudspeaker that turns our voices into real change. Into policies, programmes, laws and investments that keep children safe. That makes our world a better, healthier, stronger place for all.

Thirty years ago, Audrey Hepburn reminded us of the power of the rights protected in the Convention.

These rights matter. They are eternal.

But they are not automatic.

It’s up to all of us to bring these rights to life.

On this World Children’s Day, let’s be mindful of Audrey’s words and carry her commitment forward.

The children of the world are asking you to stand with us.

And renew your promises to the world’s children.

Climate change is a challenge that unites all children, no matter who they are or where they’re from.

Thirty years ago, when the Convention on the Rights of the Child was signed, climate change was not fully understood.

But we are seeing its impacts today. This crisis is the greatest threat of the 21st century, and climate change will undermine decades of progress towards children’s rights.

Children are the least responsible for climate change, yet they bear the greatest burden.

The poorest are the worst affected, with extreme weather and famine making it harder to break the cycles of poverty that keep so many from reaching their potential.

Not only that, but climate change has already increased the number of humanitarian crises children face each year.

But all is not lost. Because these very same children, who find themselves in so much danger, are also fighting back.

This year has seen an entire generation of children demanding their right to a safe environment.

It is now my pleasure and privilege to introduce you to one such inspiring young person.

Someone who despite his age has shown incredible commitment to climate action.

Dante Vergara is from Chile, and he is just 11 years old.

Dante became interested in climate change through his love of entomology… (that’s the study of insects).

Nobody knows better than he does that the smallest thing, can have the biggest impact, and after hearing him speak, I think you’ll agree.

Dante, please join me on stage.

Thank you so much, Keala and the PS 22 Chorus.

What a wonderful performance!

Today, we’ve heard how the Convention on the Rights of the Child has helped millions of children.

And how governments have taken action on children’s rights.

But there is more work to do.

Too many children are being left behind.

But children are speaking up.

They’re bringing their message to the streets.

They’re challenging adults and leaders -- the ones who are supposed to be in charge.

They’re asking them: what will you do?

How will you support my rights?

What kind of world do you want us to live in?

The world needs us to help build a better future.

So listen to what children are saying. 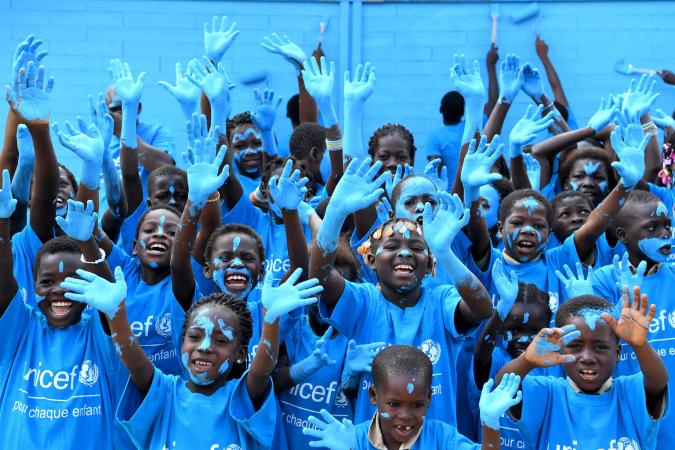