Following a huge effort from the humanitarian community to construct a network of around 1,600 Learning Centres throughout the camps – providing vital access to education for children who fled violence in Myanmar – attention is now turning to providing education for thousands of other children who still lack access.

The aim is to eventually reach 260,000 children with education this year through an extended network of 2,500 Learning Centres run by 5,000 teachers and Rohingya volunteers.

“The scale of the Rohingya refugee crisis demanded a rapid response,” said Edouard Beigbeder, UNICEF Representative to Bangladesh. “But we were only able to respond to immediate needs and could not reach every child. This year we are scaling up services to reach more children than ever before while focusing on improving the quality of education each child receives.”

The drive to construct more Learning Centres is part of a far-reaching and comprehensive set of initiatives announced by UNICEF to increase access to quality education for children living in the camps.

“I’ve been coming to class for almost a month now,” said Minara, 11, who studied until Class Four in Myanmar, but dropped out after arriving in Bangladesh because the Learning Centres she attended were muddy and too hot.

“It’s nice here,” she says as she surveys the new classroom in Kutupalong camp run by UNICEF partner CODEC. “It doesn’t have a muddy floor.”

Motalab, 12, who is blind, is one of about 600 children with disabilities who have been identified to attend school. Last year his teacher convinced his mother to allow him to attend class. Since returning to class his mood has visibly brightened, he is more outgoing and says he enjoys poetry.

The quality of education in the camps is also being improved through expanded learning modules and lesson plans. New and existing teachers are participating in development training programmes.

“Many children have suffered traumatic injuries from gunshot wounds and extreme violence, restricting their mobility and access to services. We see many children with mixed learning abilities, physical disabilities, visual impairment and speech difficulties,” said Iffat Farhana, Education Officer, UNICEF Cox’s Bazar.  “Each of these children has a right to education. With more Learning Centres and more teachers, UNICEF hopes to reach every child to help them learn, grow and realise their potential.”

UNICEF is also targeting adolescents with educational training to develop their knowledge and vocational skills.

Currently, the majority of adolescents aged 15 to 18 do not receive any kind of education in the refugee camps. This group is extremely vulnerable to child marriage, child labour, human trafficking, abuse and exploitation.

A UNICEF report last year warned that without urgent action, these teenagers are at risk of becoming a lost generation.

“It is through these targeted interventions that UNICEF is striving to provide education for the hardest-to-reach children, many of whom have severe vulnerabilities,” Beigbeder said. “Our aim is to ensure they can be equipped with the knowledge and skills they require to navigate their future.”

About 700,000 Rohingyas fled persecution in Myanmar at the end of 2017, bringing the total population of the refugee camps close to a million people.

A UNICEF report published in August 2018 warned that teenagers in the camps risked becoming a “lost generation”. It said that adolescent girls, in particular, are a major cause for concern.

Rohingya children learn basic literacy, numeracy and life skills in the camp classrooms, in addition to studying the English and Burmese languages. 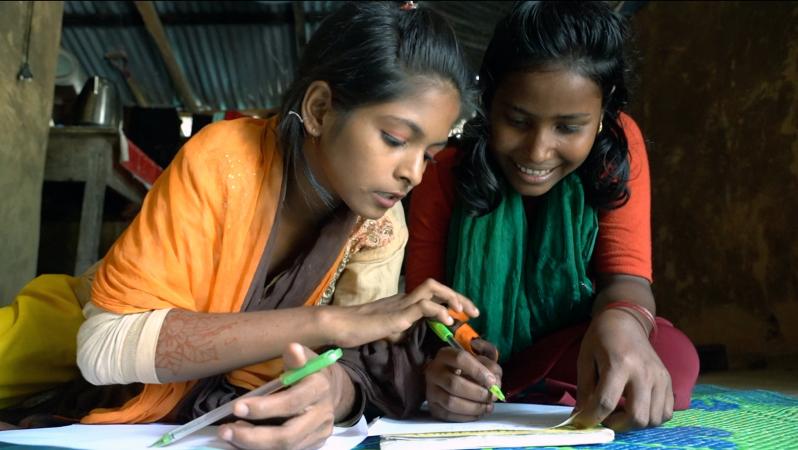