Measles outbreaks continue unabated : Five countries accounted for nearly half of all measles cases in 2018

Children in Samoa are latest victims of 2019 outbreaks 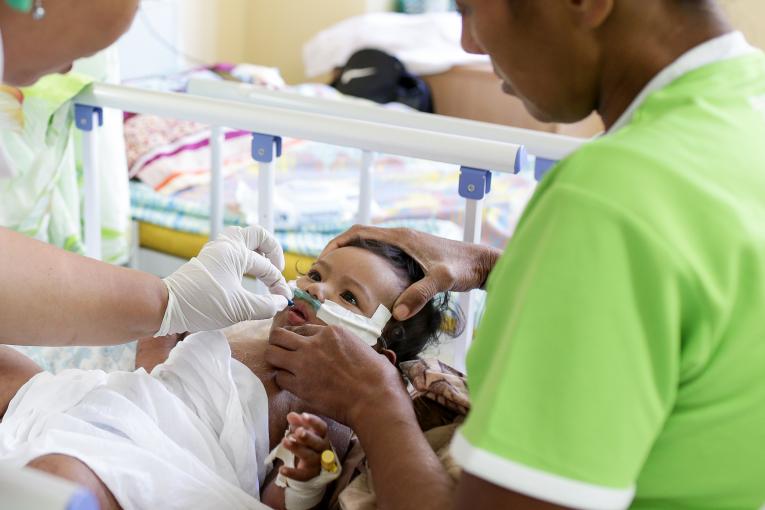 UNICEF/UNI234135/Stephen
On 3 December 2019, a nurse administers one of two doses of Vitamin A to seven-month-old Tiresa Muliselu at Tupua Tamasese Meaole Hospital on the island of Upolu in Samoa, where she is being treated for measles.

NEW YORK, 5 December 2019 – Children under the age of five accounted for most of the 140,000 people who died from measles in 2018, according to new estimates released today by the World Health Organization (WHO) and the Center for Diseases Control and Prevention (CDC) on behalf of the Measles and Rubella Initiative.

Measles cases more than doubled in 2018 compared to 2017. While final data for 2019 is not yet available, interim reports indicate that the number of measles cases continues to be dangerously high. According to WHO, there were 353,236 reported cases in 2018 compared to the provisional reporting of over 413,000 cases by mid-November in 2019. An additional 250,000 cases were reported in the Democratic Republic of Congo in 2019.  Together, this marks a three-fold increase compared with this same time in 2018.

Poor vaccination coverage and large pockets of unvaccinated children have resulted in devastating measles outbreaks in many parts of the world – including in countries that had high coverage rates or had previously eliminated the disease. In some cases, conflict, security or a breakdown in services are making it hard to reach children in remote or hard -to-reach areas. In others, parents are not vaccinating their children due to complacency, mistrust or misinformation about vaccines. This year, for example, the United States reported its highest number of cases in 25 years, while four countries in Europe -- Albania, Czechia, Greece and the United Kingdom -- lost their measles elimination status in 2018 following protracted outbreaks.

More than an estimated 19 million children worldwide missed out on the first dose of the measles vaccine by their second birthday in 2018. UNICEF and WHO report that the coverage of the measles vaccine has stagnated over the past decade, creating the pathway to current outbreaks. In 2018, only 86 per cent of children globally received the first dose of measles vaccine, and fewer than 70 per cent received the second recommended dose. This is lower than the 95 per cent coverage needed to prevent outbreaks.

Samoa and the Asia Pacific

The latest region to be affected is Asia Pacific, where measles is being reported even in places where the disease had been eliminated such as Australia, Japan and New Zealand. In Samoa, the Government has declared a state of emergency, and all schools are temporarily closed. According to data released by the Government on December 3, measles had already claimed 55 lives, mostly young children. More than 3,880 cases have been reported among a relatively small population, and new cases are being reported daily. According to estimates from UNICEF and WHO, vaccination coverage in Samoa plummeted from 58 per cent in 2017 to just 31 per cent in 2018, largely due to misinformation and mistrust among parents.

Democratic Republic of the Congo (DRC) In DRC, immunization services have been hampered since 2018 because of poor infrastructure, violence and insecurity, attacks on health centers, lack of access to healthcare, shortages of vaccines and lack of trust in health workers.

Current status: The situation has further deteriorated in 2019, with more than a quarter of a million people infected this year alone, more than three times the number of measles cases in 2018 and more than the number of cases and deaths attributed to Ebola in the country.  With the world’s fastest-moving measles epidemic, most of the 5,000 reported deaths so far this year were among children under five. In response, UNICEF has provided the Ministry of Health with 8 million doses of bundled measles containing vaccines, and distributed 1,317 medical kits – containing antibiotics, rehydration salts, Vitamin A and other medicines – to all affected health zones to treat children with complications.

Liberia The measles outbreak in Liberia started in 2017 due to low vaccine coverage. In 2018, the country had recorded the highest number of cases, with outbreaks reported in 5 out of 15 counties, and recorded about 3,948 suspected cases including 16 deaths.

Current status: The recurrent measles outbreaks have continued through 2019, even though the number of cases has declined. In 2018 and 2019, UNICEF procured and delivered a total of 451,300 doses of measles vaccines. Together with partners, a national campaign was conducted in three phases reaching 633,505 children.

Current status: Measles outbreaks are still ongoing in Madagascar. Although the rate of new cases is significantly decreasing, some districts are still reporting cases. UNICEF has helped purchase 8.7 million doses of measles vaccine and supported the government to distribute these vaccines at the local level.

Somalia In Somalia, measles is currently one of the leading causes of death among children. In 2018, low vaccination coverage, and crowded living conditions created ideal conditions for the spread of measles and other vaccine preventable diseases.

Current status: The number of cases has substantially reduced this year compared to 2018, thanks to immunization campaigns supported by UNICEF and partners of the Measles & Rubella Initiative. As of November 2019, 3,616 suspected measles cases have been reported. UNICEF and partners are currently conducting a vaccination campaign aimed to reach a total of 2.4 million children against measles and polio throughout the country.

Current status: Cases remained at alarming levels in 2019. Over 58,000 cases were registered until 6 November 2019, with 20 deaths. UNICEF has increased its support to the Ministry of Health to vaccinate more children by training health care workers and promoting vaccines. As of 1 October 2019, 70 per cent of children had received the first dose of the measles vaccine. UNICEF has also provided support to accelerate routine immunization across the country and address vaccine hesitancy.

About the Measles & Rubella Initiative (M&RI)

The Measles & Rubella Initiative is a global partnership founded by the American Red Cross, the CDC, the United Nations Foundation, UNICEF and WHO, that is committed to achieving and maintaining a world without measles, rubella and congenital rubella syndrome. Founded in 2001, the Initiative has helped vaccinate over 2.9 billion children and save over 21 million lives by increasing vaccination coverage, improving outbreaks response, monitoring and evaluation, and building public confidence and demand for immunization.

Dana, 15 months, held by her mother Inna, being administered her first dose of mumps, measles and rubella (MMR) vaccine on 4 April 2018 in Children’s Policlinic №1 in Obolon district, Kyiv, Ukraine.

Download photos and roll here, including from DRC, Ukraine and Somalia
Live updates and content from Samoa
Latest information on our response in Samoa
More about UNICEF’s work on immunization

UNICEF delivers over 260,000 vaccines and medical supplies to fight measles outbreaks in Samoa, Fiji and Tonga 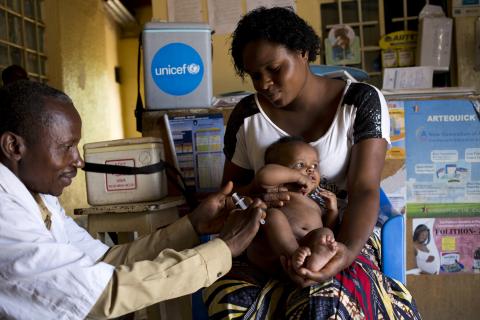 4,500 children under the age of five died from measles in the Democratic Republic of the Congo so far this year 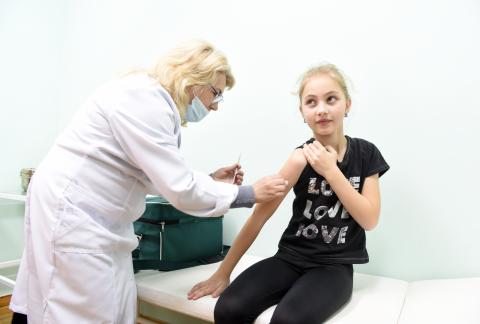