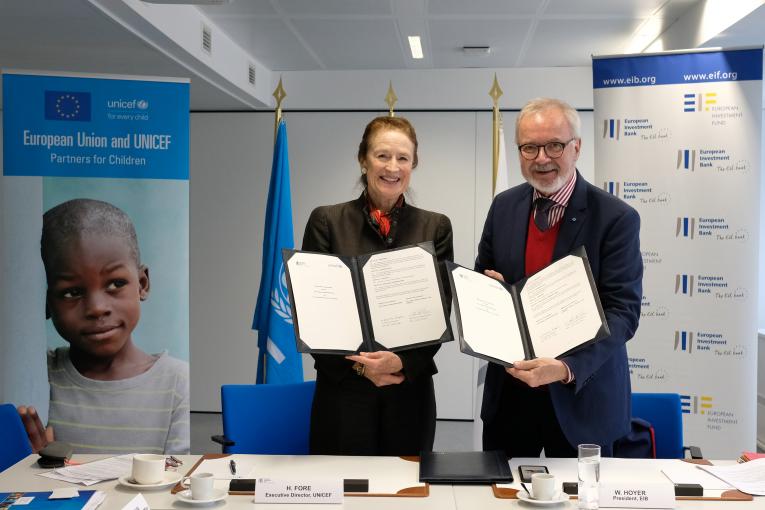 BRUSSELS, 27 January 2020 – The European Investment Bank (EIB) and UNICEF today announced a new partnership aimed at increasing access to quality education and reducing the impact of climate change on children.

Under a Memorandum of Understanding (MoU) signed by EIB Group President Werner Hoyer and UNICEF Executive Director Henrietta Fore, the two institutions committed to jointly investing in quality education and skills training for the most vulnerable children. EIB and UNICEF will also scale-up community-based climate adaptation initiatives in schools and health facilities.

Nicolas Schmit, Commissioner for Jobs and Social Rights, said: “The social agenda of this European Commission aims for a more certain future for our children and young people. We want to protect them from poverty and make sure they have access to the skills and training they need to navigate the green and digital transitions. Nobody should be left behind. I welcome today’s agreement between the EIB and UNICEF which captures that very same ethos.”

To improve children’s climate resilience and access to health services, quality education and safe water, EIB and UNICEF will promote financial innovation including impact investments aimed at boosting financing for development across private and public actors.

The two institutions will also look to help vulnerable groups gain better access to services around the EIB’s sustainable infrastructure investments, such as those in water, sanitation and hygiene projects. Pilot projects will soon be initiated in countries across Europe, Central Asia and Southern and Eastern Africa.

“Around 10 million young people reach working age every month and must be equipped with the foundational skills they need to succeed,” said UNICEF Executive Director Henrietta Fore. “By working with the EIB we can help make sure that children and young people have the digital, business and entrepreneurial skills needed to thrive in today’s market."

The European Investment Bank (EIB) is the long-term lending institution of the European Union, owned by its Member States. It makes long-term finance available for sound investment in order to contribute towards EU policy goals.