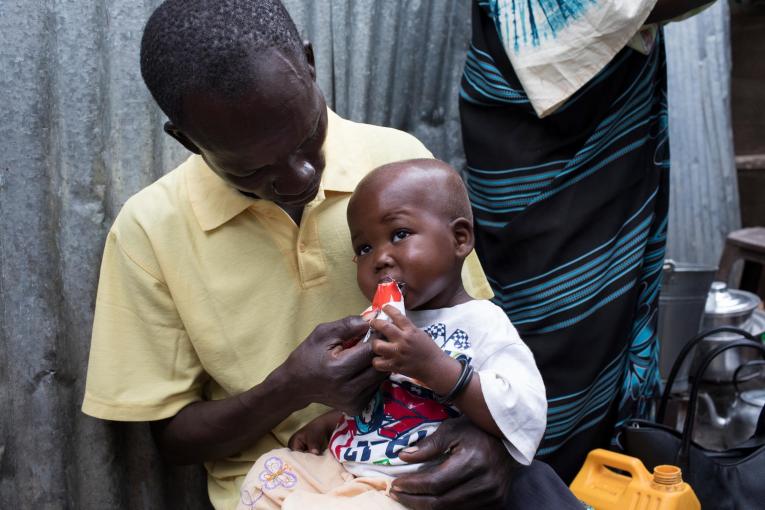 UNICEF/UN0232197/Njiokiktjien VII Photo
Gift is being fed Plumpy'Nut by his father Yosa Augustino after being treated for malnutrition in Juba, South Sudan.

NEW YORK/ GENEVA/ WASHINGTON D.C., 18 September 2018 – An estimated 6.3 million children under 15 years of age died in 2017, or 1 every 5 seconds, mostly of preventable causes, according to new mortality estimates released by UNICEF, the World Health Organization (WHO), the United Nations Population Division and the World Bank Group.

The vast majority of these deaths – 5.4 million – occur in the first five years of life, with newborns accounting for around half of the deaths.

“Without urgent action, 56 million children under five will die from now until 2030 – half of them newborns,” said Laurence Chandy, UNICEF Director of Data, Research and Policy. “We have made remarkable progress to save children since 1990, but millions are still dying because of who they are and where they are born. With simple solutions like medicines, clean water, electricity and vaccines, we can change that reality for every child.”

“Millions of babies and children should not still be dying every year from lack of access to water, sanitation, proper nutrition or basic health services,” said Dr. Princess Nono Simelela, Assistant Director-General for Family, Women and Children’s Health at WHO. “We must prioritize providing universal access to quality health services for every child, particularly around the time of birth and through the early years, to give them the best possible chance to survive and thrive.”

Most children under 5 die due to preventable or treatable causes such as complications during birth, pneumonia, diarrhea, neonatal sepsis and malaria. By comparison, among children between 5 and 14 years of age, injuries become a more prominent cause of death, especially from drowning and road traffic. Within this age group, regional differences also exist, with the risk of dying for a child from sub-Saharan Africa 15 times higher than in Europe.

“More than six million children dying before their fifteenth birthday is a cost we simply can’t afford,” said Timothy Evans, Senior Director and Head of the Health, Nutrition and Population Global Practice at the World Bank Group. “Ending preventable deaths and investing in the health of young people is a basic foundation for building countries’ human capital, which will drive their future growth and prosperity.”

For children everywhere, the most risky period of life is the first month. In 2017, 2.5 million newborns died in their first month. A baby born in sub-Saharan Africa or in Southern Asia was nine times more likely to die in the first month than a baby born in a high-income country. And progress towards saving newborns has been slower than for other children under five years of age since 1990.

Even within countries, disparities persist. Under-five mortality rates among children in rural areas are, on average, 50 per cent higher than among children in urban areas. In addition, those born to uneducated mothers are more than twice as likely to die before turning five than those born to mothers with a secondary or higher education.

“This new report highlights the remarkable progress since 1990 in reducing mortality among children and young adolescents,” said UN Under-Secretary-General for Economic and Social Affairs Liu Zhenmin. “Reducing inequality by assisting the most vulnerable newborns, children and mothers is essential for achieving the target of the Sustainable Development Goals on ending preventable childhood deaths and for ensuring that no one is left behind.”

Download photos, broll and the full report here. View mortality rates for newborns, children under 5 years and children between 5 and 14 years, including regional, country and global trends.

About UN IGME
The United Nations Inter-agency Group for Child Mortality Estimation or UN IGME was formed in 2004 to share data on child mortality, harmonise estimates within the United Nations system, improve methods for child mortality estimation, report on progress towards child survival goals and enhance country capacity to produce timely and properly assessed estimates of child mortality. UN IGME is led by UNICEF and includes the World Health Organization, the World Bank Group and the United Nations Population Division of the Department of Economic and Social Affairs. For more information visit: http://www.childmortality.org/

About WHO
WHO is the directing and coordinating authority for health within the United Nations system. It is responsible for providing leadership on global health matters, shaping the health research agenda, setting norms and standards, articulating evidence-based policy options, providing technical support to countries, and monitoring and assessing health trends and improving global health security. For more information about WHO and its work, visit www.who.int. Follow us on Twitter and Facebook.

About the World Bank Group
The World Bank Group is a vital source of financial and technical assistance to developing countries around the world, with the goals of ending extreme poverty and boosting shared prosperity. Improving health is integral to achieving these goals. The Bank Group provides financing, state-of-the-art analysis, and policy advice to help countries expand access to quality, affordable health care; protect people from falling into poverty or worsening poverty due to illness; and promote investments in all sectors that form the foundation of healthy societies. www.worldbank.org/health @WBG_Health

About the UN Population Division

The Population Division of the United Nations Department of Economic and Social Affairs is a leading source of information and analysis on global population trends, and an important centre of demographic research that supports intergovernmental processes at the United Nations in the area of population and development. The Division produces demographic estimates and projections for all countries, including data essential for the monitoring of progress toward the achievement of global development goals. For more information about the Population Division and its work, visit www.unpopulation.org

About UNICEF
UNICEF works in some of the world’s toughest places, to reach the world’s most disadvantaged children. Across 190 countries and territories, we work for every child, everywhere, to build a better world for everyone. For more information about UNICEF and its work for children, visit www.unicef.org. Learn about the Every Child ALIVE campaign. Follow UNICEF on Twitter and Facebook 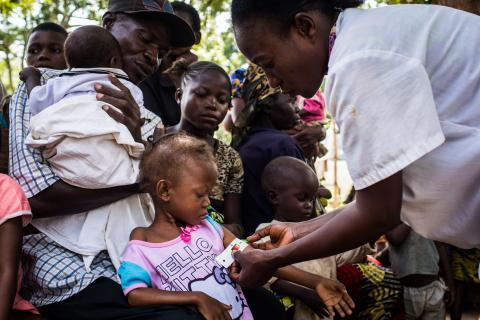 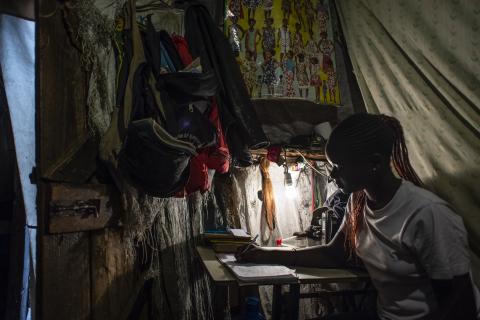 Time to re-open schools in Eastern & Southern Africa, as the cost for children escalates in learning, protection and nutrition