SEOUL/NEW YORK, 5 March 2021 – Grammy-nominated group BTS, together with its label Big Hit Entertainment (Big Hit), has renewed its commitment to UNICEF to help end violence and neglect, and promote children and young people’s self-esteem and well-being, in a video released today.

The South Korean band, which has partnered with UNICEF since 2017, shared a virtual message pledging to continue its LOVE MYSELF campaign, with its ambition of love and togetherness, particularly at this time of social isolation.

As part of the renewed global partnership, BTS and Big Hit will also donate over US$1 million to UNICEF, along with proceeds from the sale of LOVE MYSELF merchandise and as well as a portion of profit from LOVE YOURSELF album sales.

“We are extremely moved and thankful that our LOVE MYSELF campaign, which began with small steps, is now being elevated to an even bigger partnership. We also strived to “LOVE MYSELF” ourselves, and I think we as a team and as individuals grew as well,” said band member RM.

With school closures, physical distancing measures and decreased access to services, the COVID-19 pandemic has helped shine a light on the importance of good mental and psychosocial well-being for children and young people, especially those who may be living with neglect, abuse and bullying, both online and offline. UNICEF is responding to these changing times with a re-energized strategy to protect and promote the well-being of all children and young people globally.

“COVID-19 is taking an enormous toll on all of our lives and emotional well-being, not least children and young people,” said UNICEF Executive Director Henrietta Fore. “Through their music and messages, BTS has said to their global audience, ‘You are not alone. This is a difficult time for all of us. And together, with love and kindness, we will get through it.’ As our partnership moves into a new stage, together we are committed to reimagining a kinder, safer and more connected world.”

Since 2017, BTS and Big Hit’s LOVE MYSELF campaign has raised US$2.98 million globally for UNICEF’s work to end violence against children and young people and has helped adolescents all over the world open up about their own experiences.

As UNICEF supporters, BTS has addressed heads of state and world leaders at the annual United Nations General Assembly meeting in New York, and released an exclusive music video to support UNICEF’s campaign to encourage love and kindness online and in real life. Dedicated booths at their concert venues worldwide have provided information on how individuals should protect themselves and each other from violence and bullying.

UNICEF and its partners work to ensure that every child benefits from loving, nurturing, safe and supportive relationships in the home, school and community, and quality mental health and psychosocial support services. 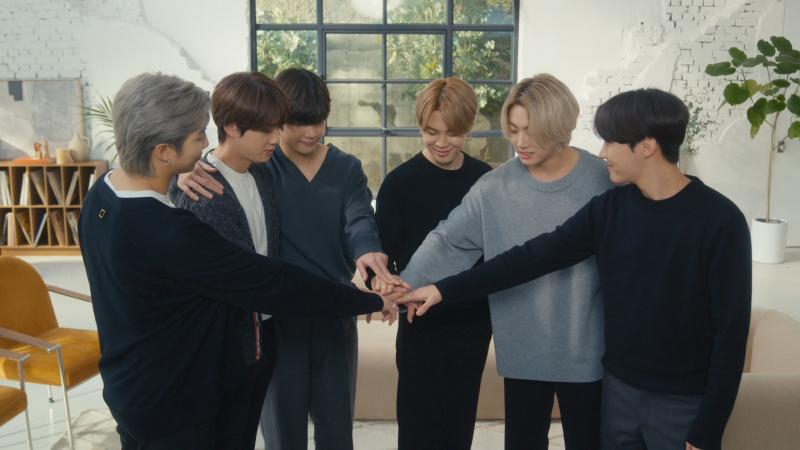 BTS renews its commitment to UNICEF to help end violence and neglect, and promote self-esteem and well-being.

BTS, an acronym of Bangtan Sonyeondan or “Beyond the Scene,” is a South Korean boyband that has been capturing the hearts of millions of fans globally since their debut in June 2013. The members of BTS are RM, Jin, SUGA, j-hope, Jimin, V, and Jung Kook. Gaining recognition for their authentic and self-produced music, top-notch performances, and the way they interact with their fans, the band has established themselves as global superstars breaking countless world records. While imparting a positive influence through activities such as the LOVE MYSELF campaign and the UN ‘Speak Yourself’ speech, BTS has mobilized millions of fans across the world (named ARMY), topped prominent music charts, performed multiple sold-out stadium shows across the world and has been named TIME’s Entertainer of the Year in 2020. They have been nominated for Best Pop Duo/Group Performance for the 63rd Grammy Awards and recognized with numerous prestigious awards like the Billboard Music Awards, American Music Awards and MTV Video Music Awards.

Founded in February 2005 in South Korea by CEO and Producer Bang Si-Hyuk, Big Hit Entertainment's core business focuses on music production, artist management and publishing. Big Hit’s business ventures incorporate and develop a range of content produced from top-notch artists' IP, including Grammy-nominated group BTS and global teen favorites TOMORROW X TOGETHER. With its mission of 'Music & Artist for Healing', Big Hit strives to impart a positive influence through content while providing comfort and inspiration to music fans worldwide. In October 2020, the company was listed on the KOSPI Market of Korea Exchange (KRX).