Conflicts in the Central African Republic, the Democratic Republic of the Congo, northwest and southwest Cameroon, the Lake Chad basin and the central Sahel, which includes northern Burkina Faso, central Mali and western Niger, have led to mass displacement, both internally and across borders. More than 7.5 million people are displaced, including over 4 million children who have been uprooted from their homes.

Across the region, 40 million people need humanitarian assistance, including 23 million children. As of 2019, the nutrition crisis has left more than 4.9 million children under 5 years at risk of severe acute malnutrition (SAM). Increasing insecurity and violence have led to a surge in grave violations against children and over 9,000 schools are now closed.

The region is seeing recurrent disease outbreaks, including of Ebola, cholera and measles. Many countries face regular risks of natural hazards such as flooding and landslides, which are exacerbated by changing population distributions, climate change and deforestation.

UNICEF will support integrated approaches to preventing and treating acute malnutrition by offering a continuum of nutritional care for children and mothers and emphasizing prevention, early detection and treatment of acute malnutrition through facility and community-based interventions. In child protection, UNICEF will prioritize reaching children who are associated with armed groups, victims of sexual violence, in detention and separated from their families, while monitoring grave violations and providing mental health and psychosocial support.

UNICEF will coordinate the implementation of the resilient education approach by scaling up alternative learning platforms to provide quality basic education for vulnerable children and adolescents in public schools, as well as religious schools and community-based learning centres and through radio education. Teacher trainings on psychosocial support and conflict and disaster risk reduction will also be provided.

Humanitarian Action is at the core of UNICEF’s mandate to realize the rights of every child. This edition of Humanitarian Action for Children – UNICEF’s annual humanitarian fundraising appeal – describes the ongoing crises affecting children in West and Central Africa; the strategies that we are using to respond to these situations; and the donor support that is essential in this response. 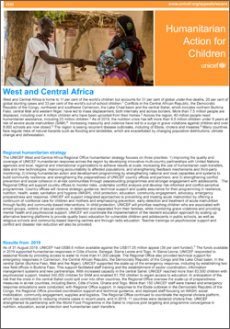 Download the full appeal to find out more about UNICEF’s work and targets for West and Central Africa.
Download file
(PDF, 202,81 KB)