Ten years after independence, South Sudan remains one of the worst humanitarian crises in the world, with 8.3 million people including 4.5 million children in need of humanitarian assistance. The country remains vulnerable to cyclical and protracted risks, including food and nutrition insecurity, flooding, sub-national violence and disease outbreaks. The effects of climate change continue to have a major impact on lives, livelihoods and access to services. Seasonal floods have been intensifying since 2018, affecting an average of 700,000 people annually. While hostility at the national level has decreased, implementation of the revitalized peace agreement remains slow and fraught with tensions, often resulting in sub-national violence across many parts of the country. With the election further postponed to 2023, the impending pre-election period is likely to further trigger political infighting and violent conflict. Localized violence has continued to intensify and destabilize local communities. The situation is further aggravated by access constraints, poor road access, limited supply and storage infrastructure, and attacks on humanitarian facilities and convoys.

South Sudan is one of the most challenging countries in the world for a child. Compounded by the climate crisis and facing some of the most violent conflicts, poor access to health services and a limited number of health personnel has produced some of the worst health indicators in the world. Around 75 per cent of all child deaths are due to preventable diseases, such as diarrhea, malaria and pneumonia. An estimated 1.4 million children under 5 years of age are acutely malnourished, including 313,391 children suffering from severe acute malnutrition (SAM). The number of out-of-school children has risen significantly, from 2.2 million in 2016 to 2.8 million in 2020 due to the impact of COVID-19 and other residual risk factors. Furthermore, over 22 per cent of children enrolled in school drop out before completion. Water supply and sanitation (WASH) is severely constrained, only 36 per cent of households report having access to an improved water source in under 30 minutes without facing protection concerns and just 17 per cent have access to improved sanitation. Grave violations of women and children's rights continue unabated as women and girls experience entrenched inequality and pervasive violence throughout their lives, in communities and within their own homes. Children face risk of recruitment into armed forces, abduction and abuse. People with disabilities (PWDs) are particularly vulnerable to conflict and natural hazards and risk exclusion from already limited services.

UNICEF South Sudan’s humanitarian strategy will be aligned with the inter-agency Humanitarian Response Plan and Cluster priorities. UNICEF will reach the most vulnerable children and women with an integrated package of life-saving services that includes health, nutrition, WASH, education, child protection, risk communication and social protection services. UNICEF will focus on preparedness and early action, with a focus on climate resilience, as well as strengthen linkages between humanitarian action and development programmes. UNICEF will support famine prevention and response interventions that place children, women and vulnerable populations at the centre, combining immediate lifesaving interventions with sustainable actions. UNICEF’s programmes will be informed by a conflict-sensitive approach, with a strong focus on social cohesion, embedded in an analysis of socio-political-ethnic dynamics as the main drivers of violence. In its approach to service provision, UNICEF will be accountable to affected populations and will ensure equitable representation of women and girls in all community feedback and complaint mechanisms and will target the most vulnerable people, including internally displaced persons, survivors of gender-based violence, children with disabilities as well as young people and adolescents. Humanitarian action supported by the Government and Implementing Partners will be implemented through decentralized operations conducted across 12 field offices, strengthening local capacities to support the localization of aid. UNICEF commits to strengthen leadership and coordination of the humanitarian response through its co-leadership of the WASH, education and nutrition clusters and the child protection area of responsibility. UNICEF will ensure an integrated supply chain approach that enables critical supplies to reach hard to reach areas. Through integrated and multi-sectoral services, UNICEF will put the rights of the child central to all interventions. As laid out in the UNICEF conceptual framework on nutrition, the underlying causes of malnutrition reflect a variety of interconnected socioeconomic risks and vulnerabilities. To address this, UNICEF will implement a systems approach to nutrition that is multi-sectoral in nature and aligns with food security, health, WASH, risk communication and social protection sectors among others. Child-focused health interventions will include supplemental campaigns for measles and other vaccines, as well as maternal and newborn care. UNICEF will provide an integrated life-saving package of WASH services. Access to education will be improved by strengthening the quality of community-based learning opportunities. Children affected by violence, abuse, neglect and exploitation will be supported with prevention and response services. In addition, prevention, mitigation and response to sexual and gender-based violence will be strengthened.

Humanitarian Action is at the core of UNICEF’s mandate to realize the rights of every child. This edition of Humanitarian Action for Children – UNICEF’s annual humanitarian fundraising appeal – describes the ongoing crises affecting children in South Sudan; the strategies that we are using to respond to these situations; and the donor support that is essential in this response. 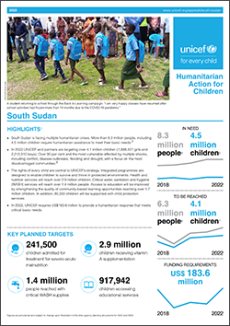 Download the full appeal to find out more about UNICEF’s work and targets for South Sudan.
Download file
(PDF, 3,10 MB)