1 million children under 5 years are malnourished

South Asia is facing a vicious cycle of cascading risks due to the rapid spread of COVID-19 and natural disasters. The intersection between COVID-19, conflict and disasters, such as the 2020 monsoon floods, landslides, droughts and Cyclone Amphan, have generated crises on top of crises. The combined effect of extreme weather events and the health and economic impacts of the COVID-19 pandemic have hit communities hard and rendered them more vulnerable and exposed to the spread of disease.

Following the heavy monsoon rains of 2020, over 20 million people (36 per cent children) were affected by flooding in the region. Cyclone Amphan affected more than 70 million people and damagedover 400,000 homes. In Sri Lanka, the high levels of wasting (15.1 per cent) and stunting (17 per cent), frequent droughts and floods, significant food insecurity and loss of income due to COVID-19 are likely to increase rates of malnutrition among women and young children.

High poverty levels, unplanned human settlements, unsafe building practices and high population density, particularly in urban areas, have left populations in South Asia particularly vulnerable. South Asia is home to the world's biggest slums – an estimated 130 million people live in informal urban settlements in the region – and some of the most polluted cities in the world, creating significant risks for children. These fragile environments, combined with critical socio-economic vulnerabilities, can give rise to poverty, undernourishment and marginalization.

Due to economic recession and other lockdown measures, millions of people living in poverty, particularly migrant labourers from small countries such as Bhutan, Maldives and Sri Lanka, have lost their jobs and are in urgent need humanitarian assistance to cope with both the pandemic and the impacts of disasters.

In line with government and inter-agency response plans and the Core Commitments for Children in Humanitarian Action, the UNICEF Regional Office for South Asia will provide an integrated, multi-sector response to build resilience, strengthen systems to prepare for and respond to crises, and link humanitarian action with development programmes. This will include promoting risk communication and community engagement; establishing infection prevention and control measures to prevent the spread of disease; advocating for increased investment in social protection measures and gender-responsive programming to shield poorer families from the worst impacts of the looming economic recession; and delivering essential health, education, child protection and nutrition services for women and children.

UNICEF will prioritize strengthening education systems through safe back-to-school campaigns to ensure that prolonged school closures do not exacerbate gaps in children’s learning and development and inequities, particularly between boys and girls and rural and urban areas.

Recognizing the specific issues facing women, adolescents and children in emergencies, the regional strategy will engage directly with women and youth leaders and community-based organizations and integrate gender-based violence prevention and response across sectors.

In the context of repeated shocks and risks, UNICEF will continue to localize its humanitarian response in the region. This will include building local emergency capacities, promoting accountability to affected populations, providing emergency cash transfers and developing shock-responsive social protection mechanisms that both respond to crises and build community resilience.

Humanitarian Action is at the core of UNICEF’s mandate to realize the rights of every child. This edition of Humanitarian Action for Children – UNICEF’s annual humanitarian fundraising appeal – describes the ongoing crises affecting children in South Asia; the strategies that we are using to respond to these situations; and the donor support that is essential in this response. 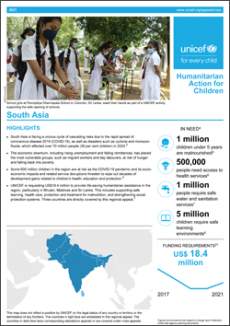 Download the full appeal to find out more about UNICEF’s work and targets for South Asia.
Download file
(PDF, 4,06 MB)