Over the past 9 years, armed groups and community violence in the central and northern regions of Mali have led to overlapping socio-political, economic and security crises that have disrupted the country's economic and social development and generated a protracted emergency. Following a military coup d'état in 2020, the country entered into an 18-month transitional government.

Mali currently ranks 184 out of 189 countries on the Human Development Index. Nearly 44 per cent of households in Mali live below the poverty line; and gender inequalities are deeply rooted. The COVID-19 pandemic and its socio-economic impacts have exacerbated these challenges, undermining economic growth, exacerbating gender-based violence risks, and further weakening a health system that was already struggling to cope with epidemics. In central and northern Mali, 45 per cent of children are not fully immunized against vaccine-preventable diseases.

Persistent insecurity in the central and northern regions is giving rise to human rights violations, particularly grave violations against children. Children in these regions are victims of recruitment and use by armed groups, killing, maiming and gender-based violence. Across the country, 1.2 million children need protection assistance.

Following the COVID-19 outbreak, school closures interrupted the education of 3.8 million children. At the same time, attacks on education infrastructure and personnel in the central and northern regions have affected 378,000 children.

Between 2018 and 2020, the number of internally displaced persons in Mali more than doubled, increasing from nearly 110,000 to over 287,000. Fifty-eight per cent of displaced people are women and girls and 54 per cent are children. In the northern and central regions, more than 96 per cent of internally displaced persons live in areas where access to water is below the national average of 69 per cent. Mali has one of the highest mortality rates due to unsafe water, sanitation and hygiene (WASH) in Africa.

The nutrition situation in the central and northern regions is also worrisome. Global acute malnutrition prevalence exceeds 10 per cent in a number of areas. More than 188,000 children under 5 years are suffering from severe acute malnutrition (SAM) across the country.

Humanitarian access remains a serious challenge in hard-to-reach areas and areas affected by seasonal flooding. Between January and July 2020, the number of people in need of humanitarian assistance increased by 58 per cent, from 4.3 million to 6.8 million, including 3.5 million children and 245,000 children with disabilities.

UNICEF's humanitarian action in Mali is in line with the Country Programme Document 2020-2024, the inter-agency Humanitarian Response Plan and the Core Commitments for Children in Humanitarian Action.

Guided by conflict and risk analysis, and lessons learned through previous programmes, UNICEF will focus on building peaceful, inclusive and resilient communities and strengthening the linkages between humanitarian action and development and peace programming. A key aspect will be community engagement, including encouraging the participation of women and girls; establishing feedback and complaint mechanisms; integrating gender-, youth- and disability-responsive programming; and applying the 'do no harm' principle.

In line with the national COVID-19 response plan, interventions will meet the needs of children and communities, especially the most vulnerable, to protect them against the disease, and mitigate its socio-economic impacts. UNICEF will focus on risk communication and community engagement and supporting the continuity of basic services.

UNICEF will provide social protection and cash transfers to the most vulnerable households, including those affected by COVID-19. This support will facilitate financial access to goods and services that meet the basic needs of children, in line with the Grand Bargain commitments.

As lead of the nutrition, WASH and education clusters and the child protection sub-cluster, UNICEF will support the Government and partners to provide an integrated, coherent and coordinated response and strengthen conflict-sensitive, gender-responsive and child-centred policies and local development plans.

UNICEF will support the delivery of an integrated package of services using a community-based approach. The aim will be to address both acute and chronic malnutrition through a continuum of prevention and care. UNICEF will facilitate access to quality primary health care and immunization for children and support the continuity of health services in areas affected by conflict and COVID-19. Infection prevention and control interventions will be implemented in communities and facilities and crisis-affected people will gain access to safe water and adequate sanitation facilities.

UNICEF and partners will undertake gender-based violence risk mitigation and prevention of sexual exploitation and abuse across all sectors. Children experiencing psychosocial distress, children released from armed groups, unaccompanied and separated children and survivors of gender-based violence will be reached with services. The most vulnerable children will gain access to quality education, with a focus on foundational learning.

UNICEF will provide technical assistance to the Government of Mali to strengthen its emergency preparedness and response system at the national and decentralized levels.

Humanitarian Action is at the core of UNICEF’s mandate to realize the rights of every child. This edition of Humanitarian Action for Children – UNICEF’s annual humanitarian fundraising appeal – describes the ongoing crises affecting children in Mali; the strategies that we are using to respond to these situations; and the donor support that is essential in this response. 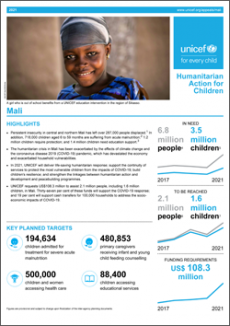 Download the full appeal to find out more about UNICEF’s work and targets for Mali.
Download file
(PDF, 2,88 MB)