Democratic Republic of the Congo Appeal

Democratic Republic of the Congo snapshot

In 2020, nearly 15.9 million people will be in need of humanitarian assistance, including 8.59 million children. In 2019, over 17,000 cases of cholera have been recorded, with further outbreaks expected in 2020, and a nationwide measles epidemic was declared in 121 health zones. The Ebola outbreak is the world’s second largest in history, with over 3,000 confirmed cases, including more than 900 children. Nearly 13.3 million people will experience crisis levels of acute food insecurity by 2020, and more than 1 million children under 5 years will suffer from severe acute malnutrition (SAM). Some 7.1 million persons – including internally displaced persons, returnees and members of host communities – will require access to emergency water, sanitation and hygiene (WASH) services.

The situation is compounded by violations of children’s rights, including lack of access to education, forced recruitment by armed groups and sexual abuse. In emergency zones, 47 per cent of survivors of gender-based violence are children. Nearly 7 million children aged 5 to 17 are out of school; 53 per cent of these children are girls.

817,900 children aged 6 to 59 months affected by SAM admitted for treatment

In 2020, within the framework of the UNICEF Democratic Republic of the Congo Humanitarian and Resilience Strategy, UNICEF will provide humanitarian assistance through a timely, coordinated and integrated multi-sectoral package of support delivered primarily in regions 10 facing recurrent population displacement and epidemics.

UNICEF will continue to be among the first responders to the Ebola outbreak (see the separate appeal for Ebola preparedness and response). UNICEF's operations will be led by 11 field offices to enable wide coverage and quality programming across the country, and provide cash-based interventions when appropriate. The UNICEF Rapid Response, a new life-saving programme and strategy, will target areas affected by shocks and displacement in North Kivu, South Kivu, Tanganyika and Ituri, using gender-sensitive multi-sectoral interventions. This programme will also contribute to the elimination of cholera in priority areas.

Screening, referral and treatment for children with SAM will be complemented by WASH interventions in health facilities and communities. Child protection services will include the provision of psychosocial support, early learning, early stimulation and play activities for vulnerable children, adolescents and/or survivors of sexual violence. UNICEF will continue to lead the WASH, nutrition and education clusters at the national and decentralized levels, co-lead the cash working group in Goma and lead the non-food items and child protection subclusters. UNICEF will continue to promote capacity building for local and international non-governmental organizations and support national authorities to reach more persons in need.

Humanitarian Action is at the core of UNICEF’s mandate to realize the rights of every child. This edition of Humanitarian Action for Children – UNICEF’s annual humanitarian fundraising appeal – describes the ongoing crises affecting children in the Democratic Republic of the Congo; the strategies that we are using to respond to these situations; and the donor support that is essential in this response. 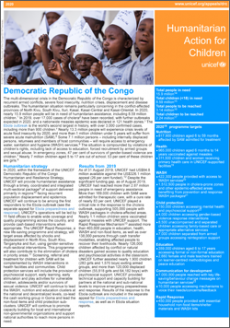 Download the full appeal to find out more about UNICEF’s work and targets for the Democratic Republic of the Congo.
Download file
(PDF, 2,04 MB)