Cameroon is facing three concurrent, complex, protracted crises, driven by armed conflict and a refugee influx that now impacts 9 of the country's 10 regions. Cameroon remains vulnerable to disease outbreaks, especially cholera and measles, and has been impacted by the COVID-19 pandemic, while COVID-19 vaccination coverage remains low.

Cameroon is currently ranked 141 out of 189 on gender equality. Gender-based discrimination against women and girls is further aggravated in regions affected by crises. Humanitarian needs play out against a backdrop of structural deficits, chronic vulnerabilities and multi-dimensional poverty that challenge the long-term recovery of affected people.

In 2021, there were 2,283 security incidents reported in the North-west/South-west (NW/SW) regions, including 71 “ghost-town”/lockdown days, during which non-state armed groups prohibit freedom of movement and economic/humanitarian activities. As a result, children’s lives and access to services and assistance were severely disrupted during approximately 14.2 working weeks. Attacks on civilians, including abductions and killings of school children and teachers are on the rise. From October 2020 through June 2021, 39 schools were directly attacked in the NW/SW regions. Threats against aid workers are similarly increasing, in part due to increased politicization of the humanitarian response. Dozens of staff working for local non-government organizations (NGOs) have been attacked, abducted or killed. Both non-state armed groups and state security forces have been identified as perpetrators of grave violations against children.

In the Lake Chad Basin (LCB), conflict continues to create considerable humanitarian needs in Cameroon's Far North Region. Humanitarian access is hampered by an increased use and presence of improvised explosive devices and unexploded ordnance, combined with physical constraints such as poor road infrastructure and seasonal flooding.

Internal population movement ranges from pre-emptive to protracted displacement, with many internally displaced persons (IDPs) displacing multiple times. Generally, IDPs live in host communities, putting pressure on community resources that are already exhausted. Acute malnutrition, exceeding emergency thresholds, endures among refugee populations both in and out of camp. The Adamawa, East and North regions host more than 325,000 refugees from the Central African Republic. The Littoral, West and Centre regions are increasingly hosting IDPs affected by armed conflict in the NW/SW regions.

UNICEF is focused on scaling up its field presence to identify and respond to the needs of affected populations, including those in hard-to-reach, insecure areas. This is particularly important in the NW/SW and Far North regions where locally tailored negotiations are key to increasing humanitarian access and the delivery of assistance.

UNICEF is committed to pursuing a strong localization strategy, in partnership with government, United Nations agencies, NGOs, and people in need of humanitarian assistance. This is critical to navigate complex community dynamics and the delivery of humanitarian assistance. To ensure a gender-sensitive response, UNICEF is working to strengthen partners’ capacity in gender-sensitive analysis, the prevention of gender-based violence in humanitarian action and the prevention of sexual exploitation and abuse. UNICEF is a member of the newly formed working group on Accountability to Affected Populations (AAP), led by UN OCHA. AAP will be assured through improved reporting mechanisms and systematic third-party monitoring in hard-to-reach areas.

UNICEF will continue to meet needs in acute crises with the Comprehensive Child Response Model, which supports a multi-sectoral rapid response mechanism, and concurrently invests in building capacity, systems, and community resilience within the context of a protracted crisis. The model offers a comprehensive package of services that includes WASH, nutrition, health and child protection and caters to the specific needs related to gender, age, disability and displacement status.

UNICEF will continue to meet sector and Cluster lead responsibilities in education, WASH, nutrition and the Child Protection Area of Responsibility. In Cameroon, UNICEF is currently piloting the Blueprint for Joint Action with UNHCR in East Region. UNICEF is also a member of the task force on Humanitarian-Development-Peace Nexus established by the United Nations Country Team to support the implementation of inter-agency humanitarian and development initiatives.

Humanitarian Action is at the core of UNICEF’s mandate to realize the rights of every child. This edition of Humanitarian Action for Children – UNICEF’s annual humanitarian fundraising appeal – describes the ongoing crises affecting children in Cameroon; the strategies that we are using to respond to these situations; and the donor support that is essential in this response. 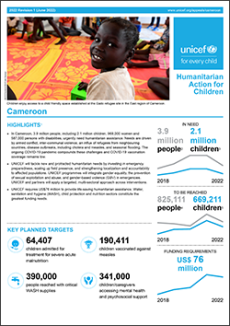