More than 855,000 children remain out of school in North-West and South-West Cameroon

UNICEF calls on all parties to protect children and their education

DAKAR/GENEVA/NEW YORK, 5 November 2019 - Three years of violence and instability in the North-West and South-West regions of Cameroon have left more than 855,000 children out of school, UNICEF warned today. Without urgent action, and without a commitment from all parties to the conflict to protect education in all its forms, the future of these children is at risk.

“Thousands of children in Cameroon are living in fear. They need peace so that they can resume their education and reclaim their future,” said UNICEF Executive Director Henrietta Fore. “When children are out of school, they face a higher risk of recruitment by armed groups, child marriage, early pregnancy and other forms of exploitation and abuse.”

Two months since the new school year started, some 90 per cent of public primary schools (more than 4,100 schools) and 77 per cent of public secondary schools (or 744) remain closed or non-operational in the North-West and South-West regions. Fear of violence has kept parents from sending their children to school and teachers and staff from reporting to work.

Among these children, almost 150,000 have been displaced from their homes, which increases their vulnerability and trauma.

In some areas where schools have been closed, community-run learning activities have been initiated to ensure that children do not miss out further on their education.

UNICEF is procuring reading books and other learning materials for 37,000 school-aged children.

In addition, UNICEF will disseminate literacy and numeracy lessons by radio for children who remain at home. These interactive lessons in English have been recorded with UNICEF support and will offer a protective learning routine for nine months, allowing children to catch up on their math and language.

UNICEF is also working to meet the longer-term educational requirements of Cameron’s children and young people, by training teachers, including on social cohesion, and launching accelerated education programmes.

“Working with partners, we are pioneering new and innovative ways to keep children learning, but this is not enough,” said Fore. “Education must remain above politics. We urge all communities, armed groups and government authorities to protect education in all its forms, to respect teachers and other education personnel, including providers of home-schooling, and to enable children to learn in a safe and protective environment. We cannot lose any more time. If we fail to act now we run the risk of having a lost generation of young people, rather than an engaged and informed youth who can help rebuild their communities.” 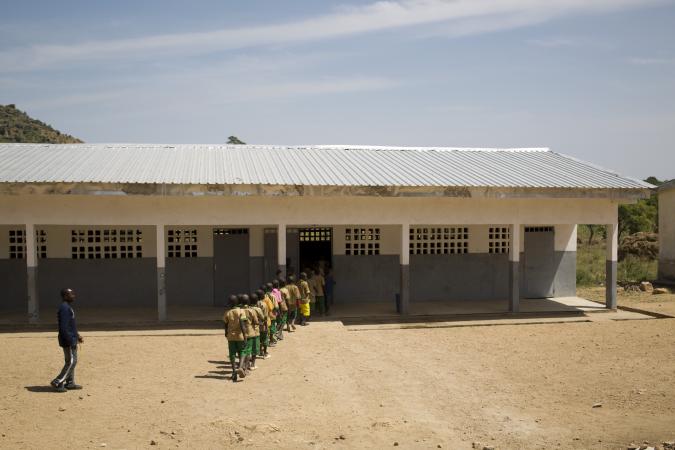 File photo: Children enter a school in Cameroon
Find out more about education under attack in West and Central Africa