How girls built a library in the Gaza Strip

A group of determined Palestinian girls are unlocking their future, one book at a time

In Gaza, UNICEF staffer Mohammed Abu Sulaiman describes how, in the midst of hopelessness, a group of determined Palestinian girls are unlocking their future, one book at a time.

DEIR AL BALAH CITY, State of Palestine, 18 December 2017 – There are one million children in Gaza, yet hardly any sports fields or playgrounds. And this lack of safe outside play areas especially affects girls. The beach is basically off limits, with terrible sewage pollution. Youth unemployment is over 60 per cent.

In recent years, we have seen young people turn to drugs, a problem that didn’t exist before. And every young person I talk to feels the isolation of our closed borders. They want to be part of the world to learn and share ideas.

Gaza can feel hopeless at times, but a group of schoolgirls have built something truly exciting.

Sokaina Girls School is in Deir al Balah City, in the middle of the Gaza Strip. ‘Deir al Balah’ means ‘Monastery of Palms’. There used to be thousands of palm trees in the area, but today few remain. Now, the city houses several refugee camps. Some 25,000 refugees live in Deir al Balah camp.

The girls of the Sokaina school decided they wanted a library. Most schools in Gaza don’t have one. And those that do usually have a limited range of books. The students knew that it wouldn’t be easy – they would be challenging social attitudes about what girls can do – but they wanted to prove that they could create a beautiful library inside their school.

A library is born

UNICEF gave the girls seed funding of US$300, and they went to the market to buy books. They had never been to the market before. Every day they would travel only between home and school.

“It’s unusual in Gaza for adolescent females to go to the market alone and collect boxes and interact with shopkeepers,” said Marah, one of the 40 students who collected books and built the library.

Unfortunately, when they got there, the girls realized that US$300 would buy barely 30 books and would leave nothing for shelves and seats.

They came up with another solution. In an empty classroom, they built shelves from wooden boxes and seats from old tyres. Then they asked several NGOs for donations and received 500 books. Early this year, their library was born.

Today, the library at Sokaina school is open six days a week for all students. Sokaina, like most schools in Gaza, operates double shifts of classes to make up for a shortfall of 232 schools. The Education Ministry has supported the girls’ initiative by providing tables, chairs and more books. And the girls have organized a committee to manage the library and keep adding to their collection.

This is a personal story for me, because UNICEF and books helped me turn my life around when I was a teenager.

I grew up in a very poor neighbourhood and left primary school with 51 stitches in my head from 17 altercations. Violence was never far away. Sometimes I was the trouble maker and sometimes I was the victim – where I lived, you had to defend yourself.

My life changed when I was 15 and started secondary school. For one thing, it was the first time I’d met girls face to face. I was also rescued because I went to an adolescent-friendly space where I met educated people who were reading Marx and Dostoyevsky. When somebody asked me the title of last book I had read, I didn’t have an answer.

So I began reading every day and every night. After six months, I started to express my opinions and ideas, and it was an amazing moment – people smiled and enjoyed what I was saying and I started to build my confidence. Seven years later, I started working for UNICEF, which was a dream for me.

And reading did it all. When you read, you know more, and you think more deeply. It’s especially important in Gaza, where we are cut off from the world. Where can young people get their ideas from? The threat of violence is never far away. But a book can change minds and beliefs.

Reading is the basis of choice

I was one of the lucky ones given the opportunity to develop my ideas and skills and make informed decisions. But the vast majority of the more than 430,000 adolescents in Gaza do not have this opportunity. By supporting young people to dream and put their ideas into action, we help them keep hope alive.

The project the girls pulled together is part of a larger programme helping bring hope to adolescents. In 2016, UNICEF began a project in 11 schools involving 1,200 high school students aged 14–16. UNICEF has trained students in skills such as communication, critical thinking, creativity, action research, leadership and civic engagement. We have encouraged them to brainstorm projects that would improve their lives.

Engaging in the project, the girls in Sokaina had the courage to go out and do something they’d never done before and to create something unique. Other young people in the programme are coming up with different initiatives. In Gaza, we have thousands of adolescents with thousands of ideas.

“It is really an amazing programme, I learned that nothing is impossible, and that I can challenge and win. I just need to think, plan, advocate,” said 15-year-old Haya Al Kurdi. “This experience taught me that I can be who I dream to be.”

It’s more important than ever to allow more young people in Gaza to lead, learn, and have the opportunity to develop their minds and put their great ideas into practice. Sometimes in Gaza we can be good at telling people what to do and what not to do. But when you create a library and you give people the chance to read two sides of an argument, you have a choice about what to think. Reading is the basis of that choice.

In the State of Palestine, UNICEF helps 18,000 disadvantaged adolescents develop their skills through life skills, civic engagement, sports and entrepreneurial initiatives. The library initiative is a UNICEF project implemented in partnership with Al Nayzak Organization for Supportive Education and Scientific Innovation and was funded by Al Fakhoora, a programme of the Education Above All foundation supported by the Qatar Fund for Development.

Nonetheless, the environment of Gaza is deteriorating to such an extent that the United Nations believes it could be unlivable by 2020. We live trapped in such a small area – about 45 km long and between 6 to 14 km wide. It’s been 10 years since people and goods could move freely in and out. We have lived through three wars in that time. Water is scarce, but the needs and the pollution are huge, which means our water aquifer is being depleted at a rate that is causing irreparable damage. Electricity cuts of up to 20 hours a day mean that raw sewage is pumped into the sea and the stench fills whole neighbourhoods. People are poor, and this grinding poverty just keeps getting worse. Parents live day to day trying to keep hope alive for their children, but fearful they will not be able to keep going.

I mentioned that Gaza could be unlivable by 2020. But I don’t believe it’s only environmental. It’s also the mentality of people, the slow grinding loss of hope as they see each day things getting a little bit worse. Everyone needs hope, especially young people. If hope dies, in any place, then there is always the risk of young people turning to risky behaviour and even violence. 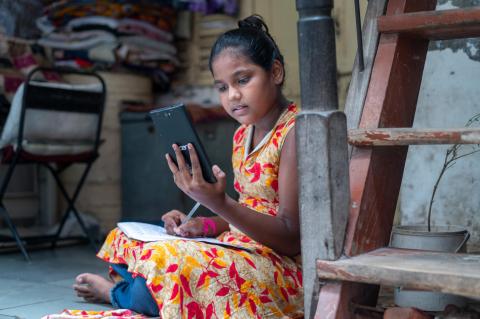