In Ebola-hit DR Congo, children struggle to cope with loss

For Stephanie and her four sisters, life would never be the same again. “With her disappearance, my mother left us alone. I get so sad when I think about her,” she says.

An aunt who lived an hour away in the town of Mangina decided to take in the five girls. Living with her restored a semblance of peace and normalcy to their lives.

But the stability was fleeting.

A few weeks ago, the health centre in Mangina was flooded with people suffering from severe diarrhoea and fever. One after another, they all began to die. The doctors and nurses had no explanation, and alerted the provincial and national health services. A diagnosis quickly followed: Mangina had been hit by Ebola.

Stephanie's aunt was infected, and within days she passed away. Stephanie and her sisters once again found themselves alone. And this time there was no one left to turn to.

Today, Stephanie’s eldest sister, Prefna, has taken on the responsibility of caring for her sisters. “She takes good care of us. She buys us clothes and food,” says Stephanie.

Fortunately, none of the girls were infected with the virus. Since they had been in contact with their aunt, they all received the Ebola vaccination.

Now protected against the virus, a psychologist and psychosocial assistants are helping Stephanie and her sisters cope with the loss of their aunt, while preventing any stigmatization from their community. The girls also receive food and school supplies.

The new school materials have given Stephanie something to look forward to. “Soon I will go to the primary school in Mangina. I want to study, and when I grow up I want to be a nun.”

To date, UNICEF and partners have provided food and psychosocial support to 155 Ebola orphaned children in eastern Democratic Republic of Congo. This includes children who have lost one or both parents, or primary caregivers to Ebola, as well as those who have been left unaccompanied while their parents are isolated in Ebola treatment centres. UNICEF and partners have also supplied school material, uniforms and school fees for the children who are of school age. 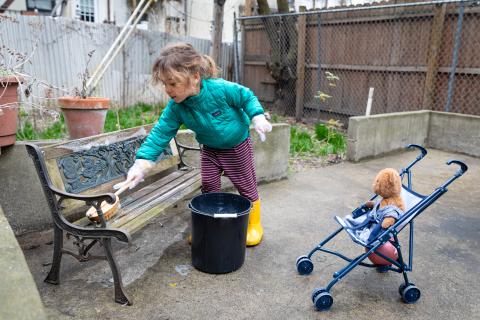 Cleaning tips to help keep COVID-19 out of your home

From doing laundry to preparing meals — every day measures to help protect your family.