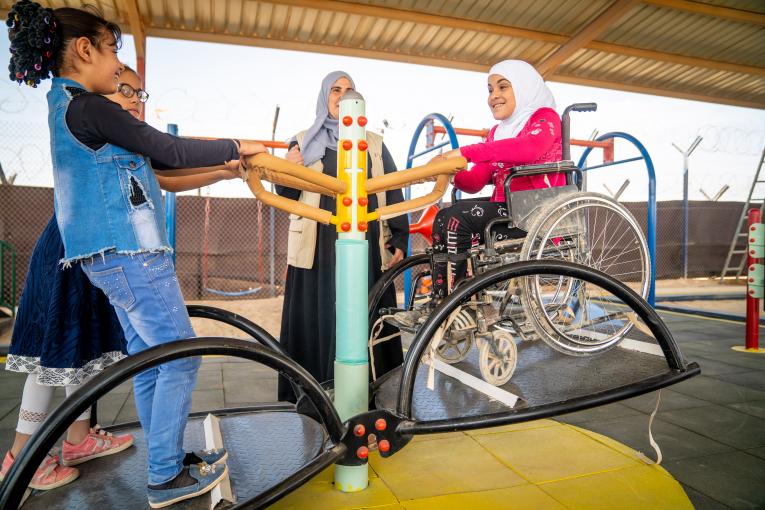 UNICEF/UN0251346/Herwig
Amal, 9 years old, plays on the seesaw in the new inclusive playground in her school in Za’atari Refugee Camp where she is in third grade. She is with Tasneem and Hala, both 10 years old.

ZA’ATARI, 29 October 2018 – UNICEF has opened the first fully inclusive playground for children with disabilities in Jordan in Za’atari Refugee Camp as part of national efforts to make education inclusive for all children. The playground, which is one of the first of its kind in a refugee camp, has been designed and equipped for children with and without disabilities to play together.

The inclusive playground project was designed and implemented locally by UNICEF partner Mercy Corps, using international best practice. It is hoped that the playground will serve as a prototype for future play facilities in schools and community settings in Jordan and globally, in both humanitarian and development contexts.

“In crisis-affected communities, children with disabilities are among the most marginalized, yet they are still at risk of being excluded from humanitarian assistance,” said Robert Jenkins, Representative, UNICEF Jordan. “Our work with the Government of Jordan to build a more inclusive and accessible education system has resulted in over 4,000 children with disabilities enrolling in public schools in host communities and refugee camps since 2012. The opening of this inclusive playground provides even greater optimism for a future where all children can fully participate in learning and play.”

“I want to play with my friends. For children with disabilities and for other girls too, it’s nice to play together,” 8-year old Asma 💙s the trampoline in her school’s new inclusive playground.#ThisAbility pic.twitter.com/EzrS0Kl75R

An estimated 30 per cent of Syrian refugees in Jordan have specific physical or intellectual needs. UNICEF Jordan is supported by UK aid, the Government of the Republic of Korea and Australian Aid to make facilities in refugee camps, including schools, toilets and the new playground, more accessible for children with disabilities.

UNICEF is supporting the Government of Jordan’s commitment to build a more inclusive society for children with disabilities by:

In addition to the launch of the Inclusive Playground, UNICEF also inaugurated six new Kindergarten classrooms and opened a new school in Za’atari Refugee Camp, helping more children receive the best start to their learning and a quality education. 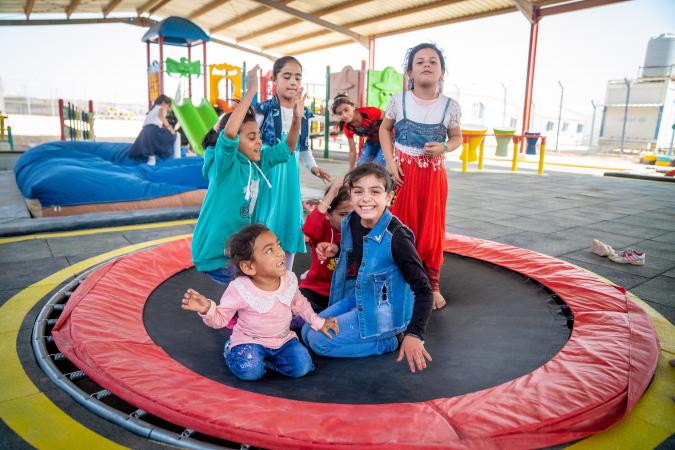 Tasneem, 10 years old, (front, right) and Asma, 8 years, (front, left) on the trampoline with their friends in the new inclusive playground in her school in Za’atari Refugee Camp. “I like all of them,” she says about the new equipment. “Especially the beanbag. It’s so nice to jump on it. I’m so happy. 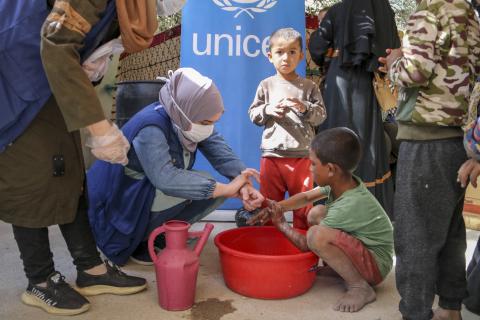