UNICEF Executive Director Henrietta Fore: Briefing to the Security Council on the situation for children in Syria

This is a summary of what was said by Henrietta Fore, UNICEF Executive Director – to whom quoted text may be attributed – at today's Security Council briefing at United Nations in New York 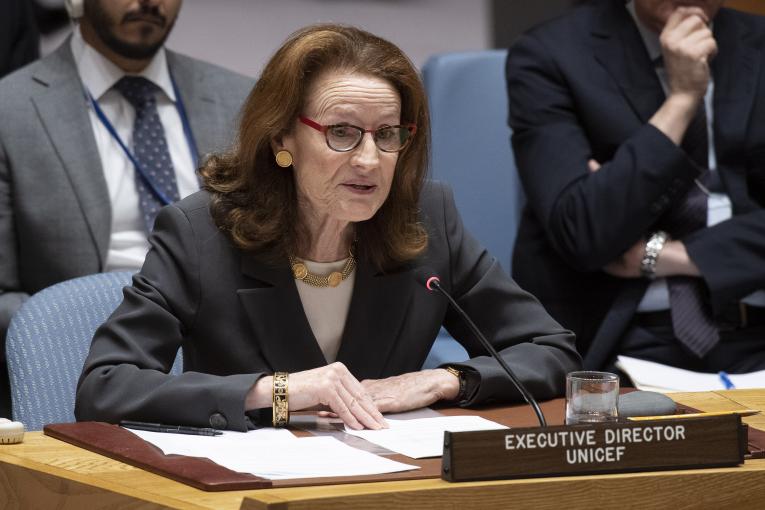 NEW YORK, 27 February 2020 – Another year. Another decade. Another grim chapter in the Syrian catastrophe that has left the country and its people reeling from the decimation and destruction of a seemingly endless war.

2020 is barely two months old. And according to OHCHR — some 300 people have been killed in Idlib and Aleppo since the start of the year.

The situation is worsening by the day.

The escalation of fighting in the northwest since December has pushed over 900,000 people — including over half a million children — away from their homes and into danger. A staggering mass movement of people in such a short time.

For some, this is the sixth or seventh time they’ve been displaced. Many have fled to northwest Idlib, while others have scattered to Afrin, A’zaz and Al-Bab, near Aleppo and the Turkish border.

Tens of thousands are now living in makeshift tents, public buildings and in the open air, huddled under trees — exposed to rain, snow and the sub-zero cold of a harsh Syrian winter.

The recent strikes on these makeshift camps in Idlib — and on the children and teachers horrifically killed just two days ago as 10 schools were attacked — are both reprehensible and morally repugnant. These acts also clearly demonstrate the terrifying daily conditions of those living through this nightmare.

We’ve heard and read reports of children freezing to death.

When wood runs out, families burn whatever they can find — plastic bags, garbage, discarded furniture — just to provide a flicker of heat against the cold, or a simple fire to cook whatever food they can find.

In these informal settlements, children and women are at particular risk of violence and exploitation. Makeshift toilets offer no safety or privacy.

Landmines and improvised explosive devices dot the landscape. Every step people take is a risk.

In the northwest, 280,000 children have had their education cruelly snatched away. And an estimated 180 schools are out of operation — destroyed, damaged or being used for shelters. Another blow to children’s hopes and futures.

Access to health care is almost non-existent or financially out-of-reach. Hospitals continue to be targeted. 72 have suspended services because of the fighting.

But the situation in the northwest is just the latest entry in the war’s devastation.

Across the country, the nine-year war has decimated public services. Over half of all health facilities, and three out of 10 schools, are non-functional.

The economy is in freefall — with the destruction of physical capital costing an estimated $120 billion, and half a trillion in economic losses. And the Syrian pound has lost nearly 50 per cent of its value in the last year.

But the true cost of the carnage is not measured in lost infrastructure or economic devastation.

It is measured in the daily lives of people.

In the 11 million people across Syria who still require urgent humanitarian assistance. Almost half are children.

In the 6.5 million Syrians going hungry every day because of food insecurity. The price of essential food items has risen 20 times since the war began. Devastating for a country in which 80 per cent of people already live below the poverty line.

Families are forced to sell off their household assets — or send their children to work — just to meet basic necessities.

Children are going without vital immunizations, medical treatments or other health services because of high costs or gaps in service.

One in three Syrian children is out of school.

6.7 million refugees have fled Syria since the war began, and 6.2 million — and counting —are internally displaced. Almost a decade of war has forced nearly half of the country’s population from their homes.

And most of all, we measure this global failure in the innocent lives lost and broken by the conflict.

In 2018, over 1,100 children were killed in the fighting — the highest number of children killed in a single year since the start of the war. Last year was scarcely better — about 900 were killed and hundreds maimed.

And these are only those we could verify. The true number is much higher.

As you learned last week from the Commission of Inquiry, children have been detained and used as bargaining chips. Thousands — Syrian and foreign alike — are confined to camps that are not fit for children. Armed groups have recruited and used boys to fight on the frontlines. Girls as young as nine have been raped. And one in four children is at risk of severe mental disorders.

The horrific scale and speed of the crisis has multiplied the humanitarian needs.

UNICEF, our sister agencies and our partners are doing all we can.

Last year, we screened 1.8 million mothers and children for malnutrition.

We delivered health consultations to over two million.

Over 7.4 million people across Syria received water and sanitation services, including improved access to water, hygiene kits and purifying tablets.

We provided almost 400,000 women and children with psychosocial counselling, to help them cope with the trauma they’ve endured.

We provided winter clothing and blankets to over 37,000 children.

And we vaccinated nearly 600,000 children under the age of one.

This is on top of the thousands of children we’ve reached — and continue to reach — across Syria over the last nine years.

But the needs are overwhelming — and rapidly outpacing our resources.

I’ll be travelling to Syria and the region this weekend to meet with officials and our humanitarian teams on the ground to see what more must be done to meet these urgent needs.

We know we need more funding and more resources to support these lives and give Syrian society even a chance at a better, more peaceful future.

But Mr. President, we also need this Council and its Members to stand up for the children of Syria and speak with one united voice.

First — We call on parties all over Syria to protect children and the essential civilian infrastructure they and their families need so desperately — such as schools, hospitals and water systems — and which Syria will need to re-build, when the fighting stops and a political settlement is underway.

Second — We desperately need a cessation of hostilities in northwest Syria. In the meantime, we need regular humanitarian pauses to allow civilians to move safely out of harm’s way if they can and wish to do so. This would also give aid workers the room they need to provide urgent care for people in need and conduct impartial assessments, including across borders.

Third — We need greater humanitarian access across the board to reach people in the most effective and timely manner. From within Syria and from neighbouring countries. This includes allowing road access for humanitarian convoys delivering medical supplies from Damascus or cross-border into Northeast Syria, as well as any visas and travel permits.

Fourth — We urge all member states to honour their obligations under the Convention on the Rights of the Child, and repatriate children in a safe, voluntary and dignified manner. The conditions under which many children are living — in particular children formerly living in ISIL-held territory — do not provide the necessary care and protection that every child needs. When in the best interest of the child, family unity should be maintained, so that children can be repatriated with their siblings and primary caregiver — usually their mother.

We also call on authorities to remove all children from detention and place them inappropriate care.

And fifth — We renew our call to this Council to lend your support and influence to a negotiated political solution that ends this war, once and for all.

As the Secretary General said last week: “There is no military solution for the Syrian crisis. The only possible solution remains political.”

Yet we are letting this opportunity slip through our fingers as we turn another year in the calendar.

The longer this war continues, the more children are going to die on the world’s watch.

More will be forced from their homes to make long, perilous journeys to safety.

More neighbouring countries will be under pressure to accept more refugees, when they have already been so generous in hosting them.

And with each passing month, the ability of Syria, and the region, to recover grows more hopeless.

And still, the fighting continues.

The message is clear. We cannot afford to greet another year with the same carnage, the same flouting of international humanitarian law, the same inhumanity, with which we begin 2020.

A child born at the start of this war is now nine years old. Are we forced to admit to her that peace is beyond our grasp? That we are unable, or unwilling, to stop this destructive war?

Next year, we will mark the 10th anniversary of the Syrian conflict — an anniversary none of us wants to see.

Millions of Syrian children are crying tonight — from hunger and cold…from wounds and pain…from fear, loss and heartbreak.

They and their families face a brutal winter and an uncertain year ahead.

We must stand with them.

We must tell them that we choose peace.

History will judge us harshly — and justly — if we do not. 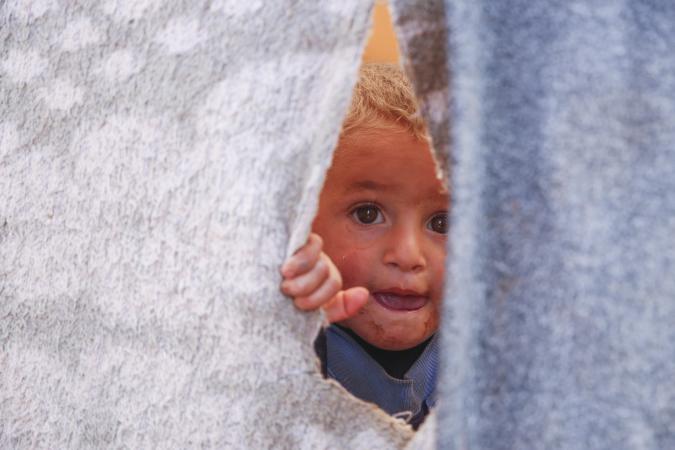 On 16 November 2019 in Idlib governate, Syrian Arab Republic, a child peeks out of a temporary shelter in an informal settlement in Killi, near the border with Turkey.