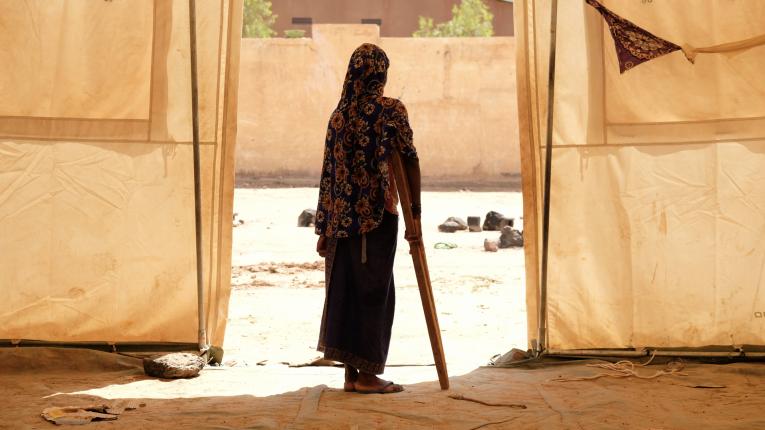 UNICEF/UN0332638/Rose
A displaced girl uses a crutch to walk around a displacement camp in Sévaré, Mali.

BAMAKO/DAKAR/GENEVA/NEW YORK, 13 August 2019 – There has been a sharp increase in grave violations committed against children in 2019 in Mali, particularly in killing and maiming, UNICEF and child protection partners warned today. Preliminary data recorded by the United Nations show that more than 150 children were killed in the first half of 2019 and 75 were injured in violent attacks. Recruitment and use of children in armed groups doubled in comparison to the same period in 2018, and more than 900 schools remain closed due to insecurity.

The spike in grave violations has led to a dramatic increase in protection needs in the north and the center of Mali. In the region of Mopti, increasing inter-communal violence and the presence of armed groups has resulted in repeated attacks which have led to the killing and maiming of children, their displacement and separation from their families, and their exposure to sexual violence and psychological trauma. Over 377,000 children are estimated to be currently in need of protection assistance in Mali.