Risking it all to escape gang violence and poverty

NEW YORK, 23 August 2016 – Every month, thousands of children from Central America risk being kidnapped, trafficked, raped, or killed as they make their way to the United States to seek refuge from brutal gangs and stifling poverty, and there is no sign this trend is letting up, UNICEF said in a report released today.

• 16,000 children from El Salvador, Guatemala and Honduras were apprehended in Mexico in the first six months of 2016.

These vulnerable children, many of whom are travelling without an adult, need protection every step of the way: in their home countries of El Salvador, Guatemala and Honduras – which have some of the world’s highest murder rates – as they cross Mexico, and when they arrive in the United States, UNICEF said in ‘ Broken Dreams – Central American children’s dangerous journey to the United States’.

“It is heart-rending to think of these children – most of them teenagers, but some even younger – making the gruelling and extremely dangerous journey in search of safety and a better life,” said UNICEF Deputy Executive Director Justin Forsyth. “This flow of young refugees and migrants highlights the critical importance of tackling the violence and socio-economic conditions in their countries of origin.”

In the first six months of 2016, almost 26,000 unaccompanied children and close to 29,700 people travelling as a family, mostly mothers and young children, were apprehended at the US border with Mexico. Thousands more never made it to the border – apprehended, kidnapped, trafficked, murdered, or fallen victim of the harsh environment along the way.

Unaccompanied children apprehended in the United States are guaranteed an immigration court hearing, but are not entitled to a court-appointed attorney. Children travelling with a parent risk swift deportation or months of detention.

Those who are deported face the risk of being attacked or killed by the gangs they sought to escape.

UNICEF said that detention of children on the basis of their migration status should be prevented. Children also should have full access to healthcare and other services and should be allowed to live with their families whenever possible.

Together with its partners, UNICEF is working to address the causes of migration by supporting the efforts of governments to improve children’s lives and address communal and criminal violence in countries of origin. UNICEF also works to strengthen services that reduce the vulnerability of children to violence, with a strong focus on education and health. It also advocates for the protection of children’s rights throughout their journey, and for governments to provide assistance to returnee children.

“We must remember that children, whatever their status, are first and foremost children. We have a duty to keep them safe in a healthy and nurturing environment,” Forsyth said. 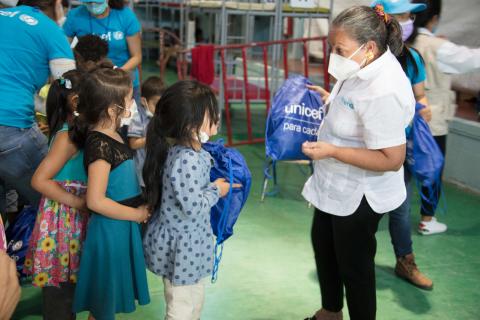