Geneva Palais briefing note on education under attack in Yemen

UNICEF/UN073959/Clarke for UNOCHA
A student stands in the ruins of one of his former classrooms, which was destroyed in June 2015, at the Aal Okab school in Saada, Saada Governorate, Yemen, Monday 24 April 2017. Students now attend lessons in UNICEF tents nearby,

GENEVA, 14 September 2018 -  “After more than three years of fighting, the situation of children in Yemen is getting worse, not better. Yemen has the largest number of children in need of humanitarian aid globally.  Over 11 million children -  80% of the country’s children – desperately need humanitarian assistance. They face the daily threat of food shortages, diseases, displacement and acute lack of access to basic social services.

“Social services are barely functioning and the whole country is on the verge of collapse. Already weak civilian infrastructure – including water networks, schools and medical facilities –is under attack. Basic goods are in critically short supply.

"When services fail, children are the first to suffer.

“September means back to school in many countries, including in Yemen. The school year started on September 9 in the South, and it should start tomorrow, September 15, in the North.

“Children’s education is one of the greatest casualties of war.

“As with other sectors, the education sector in Yemen is on the brink of collapse because of the ongoing conflict, political divisions among parties to the conflict, and chronic underdevelopment

“For this school year, we estimate that 2 million children are out of school, compared to 1.6 million before the conflict, according to data from the Ministry of Education.

“We also estimate that another 4 other million primary school students are at risk of losing access to education - mainly in the northern provinces of Yemen - because about 67% of public school teachers – and this is across the country –  have not been paid for nearly two years.

“Many have had to look for other work to survive or are only teaching a few subjects.

“The quality of education is at stake. Children are not getting their full lessons due to the absence of their teachers.  Even when schools are functioning, the schools days, terms and years are shortened.

“More than 2,500 schools are out of use; 66 per cent of them damaged by airstrikes and ground fighting, 27 per cent closed and 7 per cent used by armed groups or as shelters by displaced populations.

“Children who are not able to go to school in a country like Yemen face a number of risks.

“Boys are early targets for military recruiters. There are over 2,635 children (all boys) who have been recruited and used by armed forces and armed groups.

“Girls are at greater risk of marriage. A 2016 survey in six governorates revealed that close to three-quarters of women had been married before the age of 18 and 44.5 per cent under the age of 15.

“Out-of-school children become illiterate and unskilled parents, transmitting poverty to the next generation.

“Peace and recovery are an absolute must if children in Yemen are to resume their schooling and get the quality education they urgently need and are entitled to.

“We call upon all education authorities across Yemen to work together to find an immediate solution to provide salaries for all the teachers and education staff. The international community, donors and development partners should also support incentives for teachers while searching for long-term solutions to the salary crisis in Yemen.”

On 14 March 2018 in Aden City, Yemen, a child is displaced from Taiz because of the conflict. 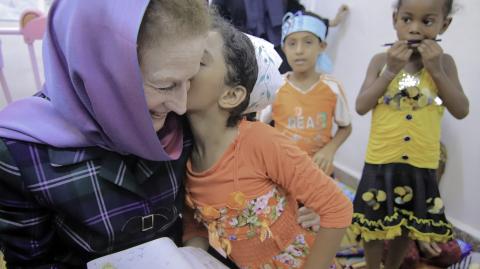 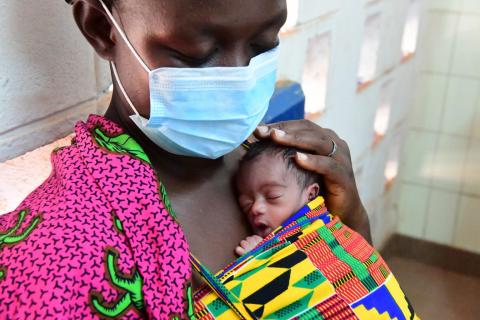 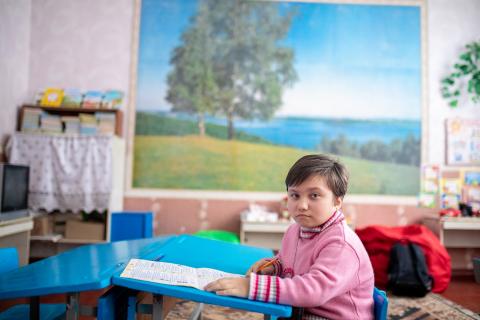 COVID-19 casts a new shadow over eastern Ukraine’s children
Despite six years of violence, many schools had managed to stay open. The coronavirus changed that
Read the story