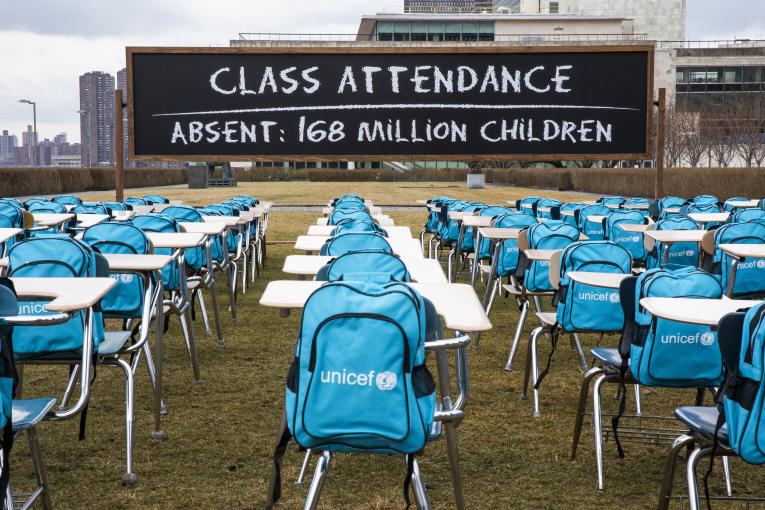 GENEVA, 27 July 2021 - "Even with schools in the northern hemisphere closed for the summer, more than 600 million children in countries not on academic break are still affected by school closures.

"In Asia and the Pacific: in nearly half the countries, schools have been closed for more than 200 days during the pandemic.

"After some of the longest closures ever seen, and despite some returns, in Latin America and the Caribbean, there are 18 countries and territories where schools are either closed or partially closed.

"And based on our most recent estimates, a staggering 40 per cent of all school-aged children across Eastern and Southern Africa are currently not in school. Four in ten.

"Education, safety, friends and food have been replaced by anxiety, violence, and teenage pregnancy

"Take Uganda: between March last year and this June, there was a more than 20 per cent increase in pregnancy among 10-24-year-olds (who were seeking antenatal care).

"And for at least a third of the world’s schoolchildren, remote learning is simply out of reach. Across East Asia and the Pacific, UNICEF estimates that more than 80 million children did not have access to any distance learning during school closures. In Eastern and Southern Africa, Uganda schools have been closed for 306 days and the country has the lowest at home internet connectivity (0.3 per cent); followed closely by South Sudan with 231 days of full school closure and again less than half a per cent of schoolchildren have internet access at home.

"In South Africa, school closures mean 400,000 to 500,000 learners have reportedly dropped out of school altogether over the past 16-months.

"And if that doesn’t resonate with those in power, then consider a World Bank report that estimates a loss of 10 trillion dollars in earnings over time for this generation of students.

"Quite simply, there is no better investment than education, and here UNICEF is not talking development; but economics: Schooling raises earnings by 10 per cent a year.

This cannot go on. While we recognize that leaders around the world are frequently being forced to grapple with the impossible choice between locking down their communities or helping to facilitate the mass spread of a dangerous disease, schools should be the last to close and the first to reopen.

"There is clear evidence that primary and secondary schools are not among the main drivers of transmission.

"And yet the losses that children and young people will incur from not being in school may never be recouped. This shock will have lasting negative impacts, so we must use it as an opportunity to accelerate – to reimagine education.

"Immediately sharing available excess doses is a minimum, essential and emergency stop-gap measure, and it is needed right now. As is financing to support the roll-out of vaccines.

"In addition to vaccines, diagnostics and therapeutics are critical to bringing this pandemic under control, which is why, as part of its annual Humanitarian Appeal for Children, UNICEF has called for US$ 659 million to help countries with the delivery of vaccines, therapeutics and diagnostic tools in 2021."