"Every day the war continues, children will continue to suffer." 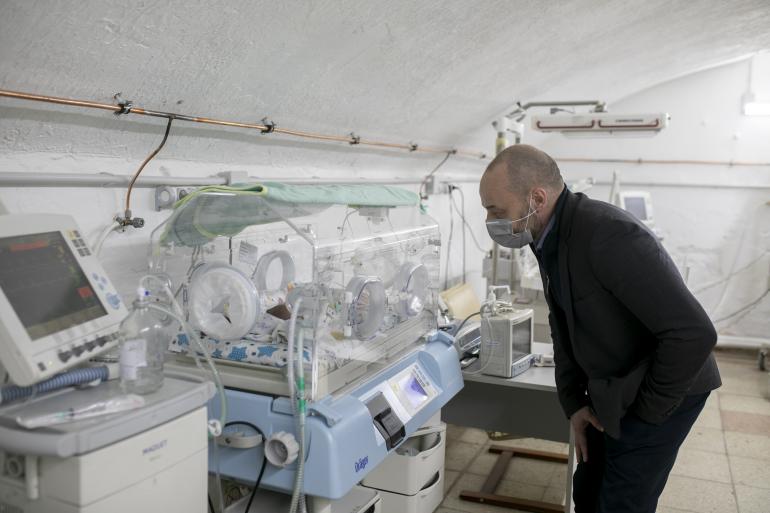 UNICEF/UN0619546/Haro
On 31 March 2022, Manuel Fontaine, UNICEF Director for Emergency Operations meets a newborn baby at the Intensive Care Unit for newborns at the Regional Hospital in Lviv, Ukraine.

NEW YORK, 11 April 2022 - "Mr President, Excellencies and colleagues, I would like to express my appreciation to Ambassador Thomas-Greenfield and Ambassador Ferit Hoxha for convening today’s meeting. I would also like to thank Ambassador Woodward and the United Kingdom for hosting this briefing during your Security Council presidency.

"I returned last week from a mission to Ukraine.  In my 31 years as a humanitarian, I have rarely seen so much damage caused in so little time.

"The station has been a critical route for thousands of families fleeing Donetsk oblast – an area that has seen some of the war’s worst violence and destruction.  When the station was attacked, it was filled with families desperate to escape the mounting violence. I note the tragic irony that our teams were offloading lifesaving humanitarian supplies only a kilometre away when so many lives were taken away by this needless act of violence.

"The attack on Kramatorsk station is unconscionable. And yet, it is just one of many instances in this war where we have seen a blatant disregard for civilian lives -- and international humanitarian law.

"Inside Ukraine, children, families, and communities are under attack.

"Of the 3.2 million children estimated to have remained in their homes, nearly half may be at risk of not having enough food. Attacks on water system infrastructure and power outages have left an estimated 1.4 million people without access to water in Ukraine.  Another 4.6 million people have only limited access.

"The situation is even worse in cities like Mariupol and Kherson, where children and their families have now gone weeks without running water and sanitation services, a regular supply of food, and medical care. They are sheltering in their homes and underground, waiting for the bombs and violence to stop.

"As of yesterday, OHCHR has verified 142 children killed and 229 children injured.  We know these numbers are likely much higher -- and many of them were caused by crossfire or the use of explosive weapons in populated areas.

"I met one of those children in an intensive care unit in a hospital ward in Zaporizhizia. Vlad, who is a 4-year-old, was shot twice in the stomach as he was escaping with his family from a contested area. Although still unconscious, Vlad is expected to live, unlike so many others.

"All the systems that help children survive are also under attack.

"Hostilities have damaged or destroyed hundreds of residential houses. Attacks on hospitals, healthcare facilities, and medical equipment -- and the killing and injuring of healthcare professionals – are making it even harder for people to access emergency care, basic healthcare, and medicine.

"Hundreds of schools and educational facilities have been attacked or used for military purposes.  Others are serving as shelters for civilians.  Nationwide school closures are impacting the learning -- and the futures -- of 5.7 million school-age children and 1.5 million students in higher education. In the Donbas region, a whole generation of children have already seen their lives and education upended during the past eight years of conflict.

"We applaud the efforts of the authorities to ensure continuity of education. However, this can only be a temporary solution. Lessons from the pandemic show the importance of children learning in a school with their peers and teachers.

"Excellencies, I met families in Zaporizhzhia who told me that they wanted to stay in their homes but were forced to flee when the shelling and violence became too much. Thousands of others now are trying to leave before the fighting closes in around them. They face further dangers along the way – missiles, crossfire and explosive remnants.

"In just six weeks, nearly two-thirds of all Ukrainian children have been displaced. They have been forced to leave everything behind: Their homes, their schools, and often, their family members.

"I have heard stories of the desperate steps parents are taking to get their children to safety and children saddened they are unable to get back to school. A social worker told me a story about parents who were forced to send their children out with a truck driver just to get them away from the line of fire.

"Such unaccompanied children are at much higher risk of violence, abuse, exploitation, and trafficking. Women face similar risks.  We are extremely concerned by increasing reports of sexual violence and other forms of gender-based violence.

"Fortunately, there has been an outpouring of support from neighbouring countries to welcome refugees. The solidarity expressed for Ukrainian refugees has been a very welcome development – one that, surely, should be replicated globally for all seeking protection and asylum, no matter where they are from.

"Excellencies, UNICEF and our partners are doing everything we can.

"Inside Ukraine, we continue to face extremely difficult operating conditions.  We have seen some progress in recent weeks, with our teams and supplies able to reach Sumy, Kharkiv and Kramatorsk, among others. But this is not enough.

"On-going hostilities prevent us from reaching those most in need in many areas of the country. We saw that last week in Kramatorsk when our teams were forced to stop offloading supplies and evacuate to safety following the nearby explosions.

"We are also helping local authorities to identify and register unaccompanied and separated children. We are providing families with much needed humanitarian cash assistance and increasing awareness to minimize the risks of explosive ordnance.

"In Zaporizhzhia, I visited a reception centre, set up by local authorities - run mostly by women professionals - for displaced people to access health and psychosocial services, have a warm meal, and rest temporarily.  These services are critical, but they are not solutions.

"Many of those who were able to flee early have been able to find sanctuary in other countries. It is not clear to us how those who are being displaced now will fare. They have been exposed to violence for longer and may have fewer resources at their disposal.

"Resources are already over-stretched and local residents live in a state of uncertainty as the sounds of air raids and warnings from local officials ring regularly, reminding them that the frontlines may soon reach them too.

"Excellencies, I am particularly concerned about the widespread presence of explosive remnants of war which expose children to the risk of death and horrendous injury. Eastern Ukraine was already one of the world’s most mine-contaminated stretches of land even prior to the recent escalation. This reality is rapidly extending to other parts of the country.

"We are carefully monitoring the health, rights, and dignity of women and girls, as the risk of exploitation and abuse grows.

"And we continue to reiterate the need to ensure that children who have become separated from their families or who live in institutional care are protected and that every effort be made to obtain caregiver consent and authorities’ approval before these children are evacuated or relocated.

"In closing, I want to express how proud I am of our UN teams both inside Ukraine and in neighbouring countries.  The work they are doing is indispensable.

"I want to also salute the remarkable resilience of Ukrainian doctors, nurses, teachers, and social workers - especially women who have been at the forefront of the response.  I was deeply impressed by the care they are providing children and families.

"I visited an underground maternity ward in Lviv that is staffed 24/7 by a team of tireless women – assisting births amidst air raid alerts.  Local women’s organizations are mobilizing grassroots networks to care for the most vulnerable, even under the darkest of circumstances. Their courage and commitment are a light in the dark.

"But most of all, I want to entreat all those with the power to end this war to use that power.  The lives and futures of millions of children hang in the balance.

"Excellencies, the math is simple. Every day the war continues, children will continue to suffer.

"As Humanitarians, you can count on us to continue doing our work, but there is only so much we can do.

"It is time to end this war.  Ukraine’s children cannot afford to wait. 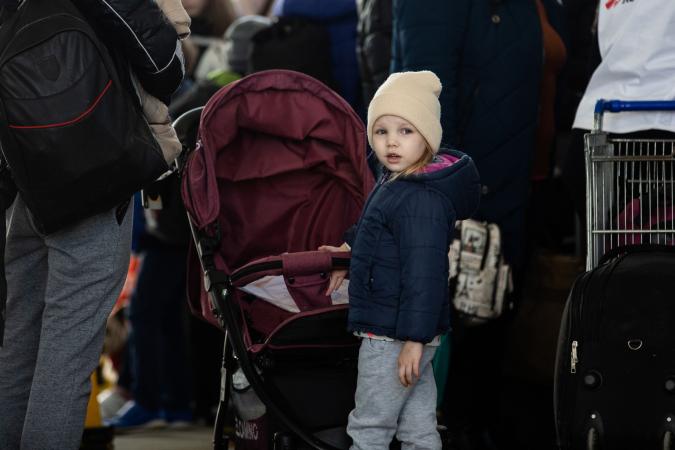