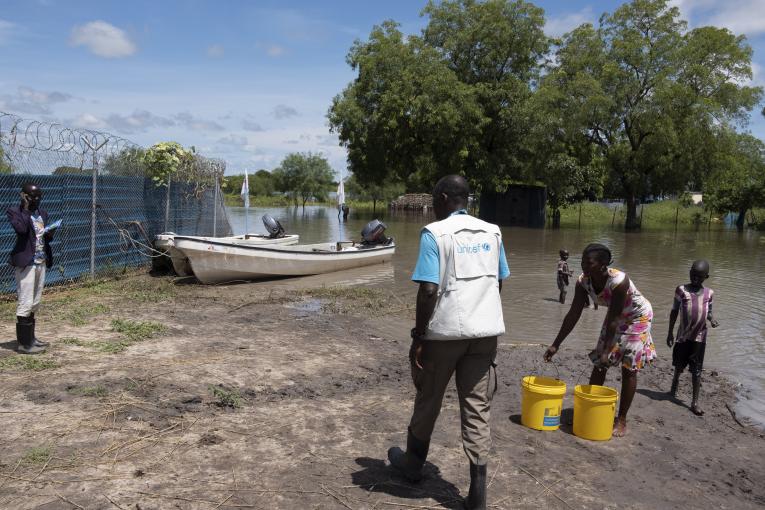 JUBA, South Sudan, 25 October 2019 — An estimated 490,000 children are affected by heavy flooding in South Sudan, UNICEF warned today. Exceptional heavy rain since July, have affected some 908,000 people in 32 counties. While heavy rain and flooding is normal this time of year, the current scope and scale of the flooding is severe especially in the former states of Jonglei, Upper Nile, Warrap and Northern Bahr El Ghazal. The rain is expected to continue for another four to six weeks.

In flood-affected areas, several health centres are filled with water and are not able to provide services to the population. Of those remaining open, some are inaccessible to children and their families due to impassable roads and destroyed bridges. Access to health care in South Sudan was limited before the floods, with the access constraints and upsurge of malaria and diarrhea in the affected areas, the situation is critical.

“In South Sudan, water is normally associated with life, now, water it is putting children’s lives at risk,” said Dr Mohamed Ag Ayoya, UNICEF Representative in South Sudan. “UNICEF is extremely concerned about children’s health in the affected areas with an increase in malaria and waterborne diseases such as diarrhea, two of the major child killers in South Sudan.”

The floods have contaminated water sources and 70,000 families are temporarily displaced as their homes are underwater. Schools are closed after succumbing to a large amount of water and classrooms are used as shelters for displaced, leaving children out of school.

60 per cent of the counties affected by the flooding had extreme levels of malnutrition before the heavy rain started. The flooding is likely to increase the risk for acute malnutrition among children, due to the high levels of malaria, poor access to water, sanitation and hygiene. 42 nutrition centres have suspended their services due to the flood, which could further aggravate the already serious severe acute malnutrition situation where death is a plausible outcome if not treated timely.

The consequences of the floods will be felt long after the water subsides if timely assistance is not given. Damaged crops and grazing land submerged in water will hamper access to food for many children and their families. This is worsening the already serious food situation in the country, hitting children the hardest. Schools will need to be rebuilt and re-enrollment campaigns executed in order for children to return to classrooms.

“Flood is a harmful cocktail for children,” said Ayoya. “It increases the risk of exploitation and abuse, it affects their health and education and can also take their lives if we don’t respond timely. UNICEF is calling on donors to ensure the response to children and their families in the flood-affected areas is prompt and adequate.”

UNICEF is working with The Government of South Sudan and partners, responding to the floods by:

UNICEF is appealing for $US 5.5 million to respond to the most immediate needs of children in the flood-affected areas. 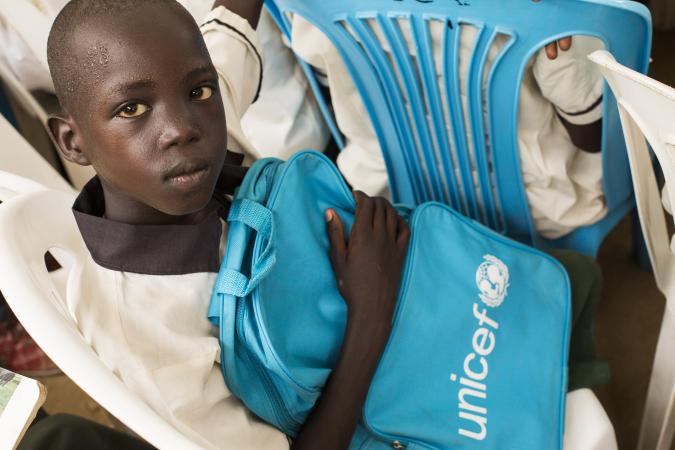 A child sits holding a UNICEF school bag he received during the launch of the new South Sudan National curriculum 2019 in Juba, South Sudan.