Damages to the water network and power cuts left an additional 4.6 million people across Ukraine without adequate access to safe water. 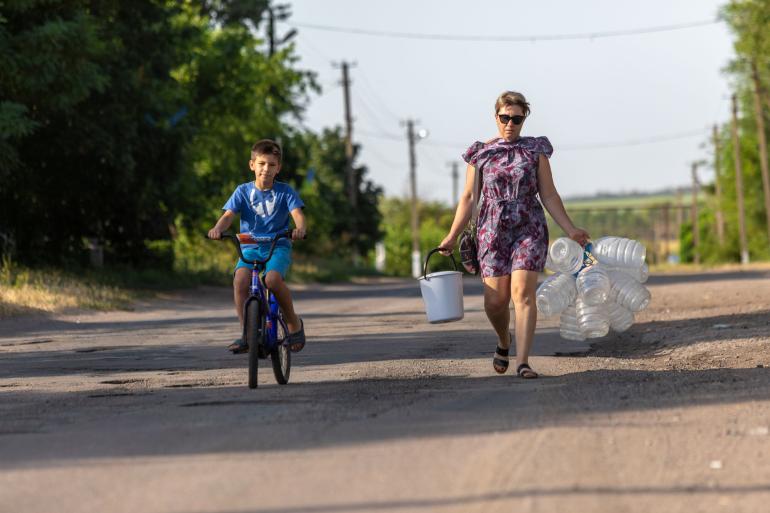 UNICEF/UNI356687/Filippov
FILE PHOTO: David, 8, and his mother travel to the council building in Pavlopil, eastern Ukraine, to collect safe water.

LVIV, Ukraine, 15 April 2022 - More than seven weeks of intense hostilities in Ukraine have devastated both water and electricity networks, leaving 1.4 million people without access to safe water in the east of the country and a further 4.6 million people with only limited access. In total, over 6 million people in Ukraine are struggling every day to have drinking water, one of the most essential human needs.

Since the start of the war on 24 February, at least 20 separate incidents of damage to water infrastructure have been recorded in eastern Ukraine alone. The most recent intensification of fighting in the Donbas region and the widespread use of explosive weapons in populated areas threatens to push the water system—already impacted by the previous eight years of conflict—to the edge of a complete collapse.

“Water is essential for life and a right for everyone,” said Osnat Lubrani, the Humanitarian Coordinator for Ukraine, warning about the health risks caused by water stoppages, particularly for children and the elderly. “Poor water quality can lead to diseases, including cholera, diarrhoea, skin infections and other deadly infectious diseases. People are having to live in crowded conditions and are unable to follow basic hygiene measures. This has to be solved,” added Lubrani.

The situation is particularly critical in Mariupol, where tens of thousands of people are likely to be using dirty sources, as they seek any water they can find. Major cities across Donetska and Luhanska oblasts are also cut off from water supplies and an additional 340,000 people risk losing access to safe water if a reservoir in Horlivka runs dry. Sumy and Chernihiv cities experienced serious water stoppages in early March and Kharkiv’s system was also seriously affected.

Restoring water access and providing emergency supplies to these cities and other areas of intense fighting has been extremely challenging. Since the start of the conflict, humanitarian organizations in Ukraine have received reliable reports that four water technicians have been injured in Chernihiv and one in Kharkiv, adding to at least 35 water engineers who have been killed or injured in Donetska and Luhanska oblasts since 2014.

One year ago, the United Nations Security Council unanimously adopted Resolution 2573, recalling the international humanitarian law (IHL) obligations of all parties to armed conflicts to protect civilians and civilian infrastructure, including water facilities. However, civilian infrastructure, including water, sanitation and electricity networks have been destroyed during the war in Ukraine, severely hampering people’s access to vital services.

“It is imperative that the parties to the conflict respect their IHL obligations and take constant care to spare civilian infrastructure. In cases where water facilities suffer damage, water technicians must be afforded urgent and safe passage to repair the network,” said Osnat Lubrani.

Humanitarian organizations providing water, sanitation and hygiene services to people impacted by the war in Ukraine reiterated calls to all parties to the conflict to avoid the use of explosive weapons in populated areas and remove military hardware and personnel from positions close to civilian infrastructure.

“Young children who live in conflict zones are 20 times more likely to die from diarrhoeal diseases linked to unsafe water than from direct violence, as a result of war,” said UNICEF Ukraine Representative, Murat Sahin. “Their access to water, wherever they are, must not be jeopardized as a result of war – for children, it is a matter of life and death,” added Sahin.

Since 24 February, humanitarian organizations in Ukraine have assisted over 180,000 with access to clean water and hygiene products. Organizations working as part of the water, sanitation and hygiene (WASH) Cluster, led by UNICEF, also provided generators and equipment to repair damaged infrastructure to power water pumps and operationalize the water system in Sumy and Chernihiv. Some 57.4 tons of liquefied chlorine have been procured for the Kharkiv Vodokanal water system, which will purify water for a three-week period; and 4.5 tons of liquified chlorine gas to operate the Uzhgorod Vodokanal. This will ensure safe water for 1.4 million people in Kharkiv and 140,000 in Uzhgorod, which have seen an influx of displaced people.

ABOUT the WASH Cluster
The Global Water Sanitation and Hygiene Cluster, or Global WASH Cluster (GWC) is a partnership grouping 32 partners and aiming at improving the coordination and the humanitarian response in the WASH Sector. Find out more about the Wash Cluster's work in Ukraine here