To promote integration of Venezuelan migrant children and adolescents in Peru

As part of the launch of the campaign #WelcomeThemWithLove, to promote the integration of Venezuelan migrant children and adolescents in Peru, UNICEF Latin America and Caribbean Regional Director, María Cristina Perceval, visited on 30th April the Binational Border Services Centre in Tumbes, on Peru’s northern border with Ecuador.

There, the Regional Director had the chance to meet fourteen-year-old Rosimar Mendoza, who arrived there a few hours earlier, after travelling for nearly 20 days from her home in Venezuela.

Rosimar, her two younger siblings and her parents found the assistance and services they need after their long and difficult journey. Some of those services are provided by UNICEF in support of the Government of Peru’s efforts to guarantee the dignity and human rights of each migrant.

At the border, Rosimar and her family received hygiene kits and, for the first time in several days, they were able to bathe in showers provided by UNICEF. They also passed through UNICEF’s “Happiness Tent”, a child-friendly space where children can feel safe and play while adults go through the procedures required to continue on their journey.

UNICEF’s other interventions in Tumbes include nutritional assessment and counselling for children, as well as supporting the Ministry of Health’s immunization services. UNICEF has also assisted the Special Protection Unit of the Ministry of Women and Vulnerable Populations to care for children and adolescents who arrive unaccompanied or separated from parents and relatives.

"I'm going to cross all of Peru and get to Santiago,” Rosimar told the Regional Director. “I would very much like to keep studying, I want to be a forensic pathologist and I hope to fulfil my dream."

To reach the Chilean capital, Rosimar will have to travel several more days. If her family decides to stay, she and her siblings will join the more than hundred thousand Venezuelan children and adolescents already living in Peru who are looking to go to school. 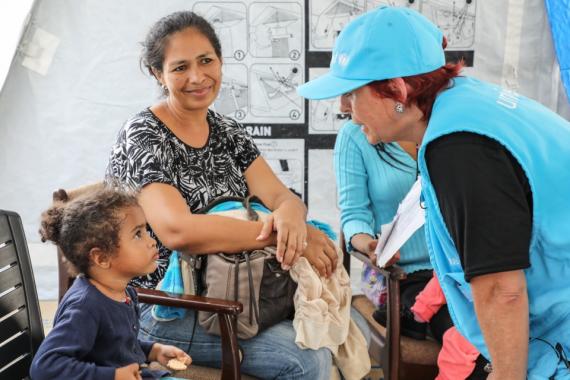 Keeping those children in mind, the Ministry of Education, with support from UNICEF and other institutions, has designed a standardized placement test to evaluate migrant students and place them in the corresponding school grade.

#WelcomeThemWithLove, an initiative for integration

The integration of these children into Peruvian schools and society is a significant challenge. To help achieve this, the Embassy of Canada and UNICEF, in partnership with Peru’s Migration Office are running the campaign #RecíbelosConAmor (#WelcomeThemWithLove). As part of UNICEF’s global #Uprooted campaign, the national initiative aims to promote integration between Venezuelan and Peruvian children and adolescents, as well as good treatment of migrant children.

María Cristina Perceval attended the campaign launch in Lima. She congratulated the Government of Peru, especially the Migration Office for its efforts to guarantee the rights of migrant children and adolescents. Perceval also noted that Peru’s migrant integration policy and actions to protect children, both at Peru’s borders and in host communities, are an example for other countries in the region.

"Where many see a bureaucratic act of providing documents, we see a human action that changes lives because it allows for the regularization of immigration status, family reunification and access to services and rights. Therefore, we recognize Peru, who reminds the region that the rights of children and adolescents have no borders", she said.

UNICEF Representative in Peru Ana de Mendoza explained that the main action of this campaign is a collection of encouraging messages for migrant children and adolescents that is taking place on Lima’s streets and shopping centres. "The challenge put forward by the Embassy of Canada, the Migration Office and UNICEF is to gather as many messages as Venezuelan children and adolescents have entered Peru," she said.

A video featuring National UNICEF Ambassador Marco Zunino promotes the campaign. In the video, the actor invites Peruvians to join the campaign by recording messages and sharing them on their social networks with the hashtag #WelcomeThemWithLove.

UNICEF is complementing this collection with activations, including a maze game and word search puzzle, in food courts of Lima's shopping centres. The campaign’s messages are also displayed on LED screens on the main streets of the Peruvian capital.

The campaign is being shared through the social networks of the participating institutions, those of National UNICEF Ambassador Gastón Acurio’s restaurants and those of radio personality Gachi Rivero and young actress Francisca Aronsson.

In its first three weeks, #WelcomeThemWithLove has mobilized more than 30,000 people who, through messages, selfies, posts on their social networks and participation in the activations, have expressed their solidarity with migrant children and adolescents. 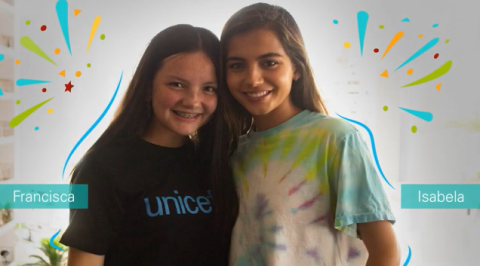 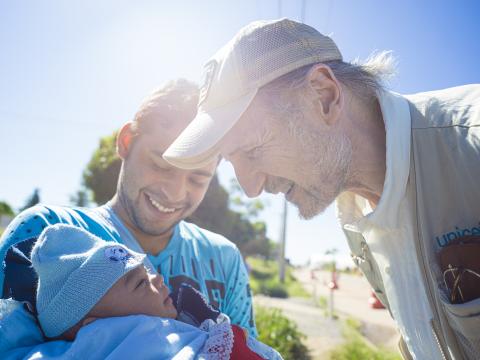 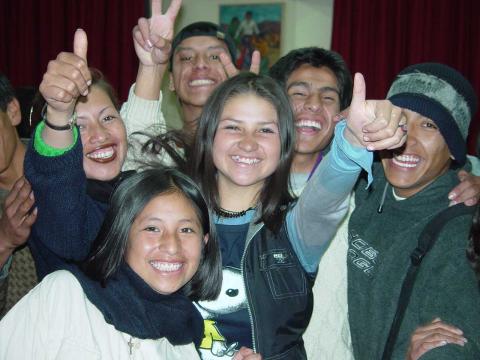