After eight years of conflict, the national socioeconomic systems of Yemen remain on the edgeof total collapse, driving major increases in needs across all sectors. More than 23.4 million people, including 12.9 million children, need humanitarian assistance and protection in 2023. This is almost three quarters of the entire population. And, with more than 4.3 million internally displaced people since 2015, Yemen remains one of the largest internal displacement crises globally.

Negotiations continue for the extension of the United Nations-mediated truce that came into effect in April 2022 and ended in October 2022. The Special Envoy of the Secretary-General for Yemen, Hans Grundberg, cited important progress that was made during the truce, such as the increased availability of fuel, the resumption of commercial flights from the Sana’a airport and the reduction in civilian casualties. As a result, the country continues to experience regular outbreaks of cholera, measles, diphtheria and other vaccine-preventable diseases.

Food insecurity and malnutrition continue to be principal challenges, with pockets of the country experiencing extreme hunger. More than 19 million people in Yemen are expected to experience high levels of acute food insecurity between June and December 2022. This includes 161,000 people in a state of extreme food insecurity. In addition, 2.2 million children under 5 years of age are wasted, including more than 500,000 children (50 per cent girls) who are suffering from severe wasting.

The current humanitarian crisis in Yemen has increased the vulnerability of children and women to exploitation, violence and abuse, child labour, killing and maiming, recruitment and use of children by parties to the conflict as combatants and in various support roles, domestic and gender-based violence, child marriage and psychosocial distress. More than 8.8 million children need child protection services, and nearly 8.5 million children require educational support.

UNICEF humanitarian strategy in Yemen is aligned with the Humanitarian Needs Overview, Humanitarian Response Plan and cluster priorities. As the lead for the WASH, Nutrition and Education Clusters and the Child Protection Area of Responsibility, UNICEF supports sector and intersectoral coordination and information management at national and subnational levels. UNICEF also supports inter-agency coordination for community engagement and accountability to affected populations through the related Working Group and provides technical leadership to Yemen’s efforts to harmonize system-wide complaints and feedback mechanisms.

UNICEF will pursue a balanced approach between providing life-saving interventions in some of the hardest-to-reach areas, via its robust field presence and network of five field offices, and investing in systems strengthening. Addressing the humanitarian, development and peace nexus, including strengthening multisectoral approaches, will require a nuanced strategy and dedicated donor support.

Life-saving health and nutrition interventions for affected populations, including internally displaced people, will be provided through community-based activities. At the same time, UNICEF will sustain and strengthen access to high-impact preventive and curative services at the community and facility levels. Following scale-up of nutrition services in 2022, in 2023 UNICEF will focus on strengthening the quality of service delivery and enhancing the multisectoral response (health, WASH, social protection and education) to address wasting.

The WASH programme will focus on rehabilitating and supporting water and sanitation infrastructure to provide a minimum level of service. Given the negative impacts climate change can have on the sustainability of WASH services and behaviours, UNICEF will promote climate-resilient development through use of expanded solarization and optimization of water systems and other cost-effective solutions. UNICEF will continue to improve access to and enrolment in safe learning environments through the implementation of non-formal education, the rehabilitation of damaged schools and the establishment of temporary safe learning spaces. UNICEF will help to build resilience among affected children by supporting life skills education and psychosocial support in community spaces, schools and hospitals, while also mitigating the risk of injuries from exposure to landmines and explosive remnants of war through targeted campaigns. UNICEF will provide services to children with acute protection needs and support vulnerable children and their caregivers with specialized services and mental health and psychosocial support. As co-lead of the Country Task Force on Monitoring and Reporting, UNICEF will engage with parties to the conflict to establish concrete measures to prevent and halt grave violations of child rights.

Vulnerable children and families will also continue to receive integrated social protection services and humanitarian cash transfers via UNICEF’s cash transfer programme. The prorgamme will be sustainably handed over to national partners towards the end of 2023. The cash transfers will target the most marginalized people to ease the economic barriers they face to accessing services and treatment.

UNICEF will integrate gender-responsive initiatives to ensure protection from sexual exploitation and abuse and strengthen interventions to prevent, respond to and mitigate gender-based violence.

Humanitarian Action is at the core of UNICEF’s mandate to realize the rights of every child. This edition of Humanitarian Action for Children – UNICEF’s annual humanitarian fundraising appeal – describes the ongoing crises affecting children in Yemen; the strategies that we are using to respond to these situations; and the donor support that is essential in this response. 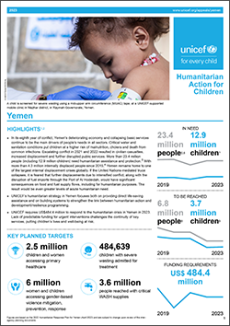 Download the full appeal to find out more about UNICEF’s work and targets for Yemen.
2023 HAC appeal (PDF, 2 MB)