The Syrian refugee crisis remains the largest displacement crisis in the world, with 5.6 million registered refugees, including over 2.5 million children, living in Turkey, Lebanon, Jordan, Iraq and Egypt.

Among the 18.8 million people in need (including in host communities), 6.3 million people require water, sanitation and hygiene (WASH) assistance and 7 million children require education support. Despite host government efforts to provide public services for refugees, vulnerability remains high and is exacerbated by lack of livelihood opportunities, growing inequalities and economically strained institutions. In some locations, pressure has been steadily mounting on refugee populations, affecting the already fragile social cohesion. Refugee women and children – including unaccompanied and separated children and women and children with disabilities – are most at risk.

In schools, overcrowded classrooms, lack of supplies, violence and discrimination are seriously undermining children's access to education. Years of conflict in the Syrian Arab Republic and prolonged displacement have negatively impacted the psychosocial well-being and learning abilities of refugee children, many of whom have dropped out of school.

While Syrian refugees and host community households do experience similar challenges, refugees are also vulnerable to additional challenges – particularly in regard to meeting their basic needs – due to their legal status and the impact of residency and labour policies on their mobility and access to essential services and livelihood opportunities. In this context, risks of exploitation and abuse are high, and households are forced to resort to negative coping mechanisms such as child labour to generate income. Moreover, women and girls remain at risk of gender-based violence, including child marriage, which is rooted in harmful social and gender norms and exacerbated by years of displacement and fragmented social safety nets.

The registered Syrian refugee population is expected to remain significant throughout 2020. The deteriorating security situation in the northern Syrian Arab Republic could further destabilize the region, hinder voluntary and safe returns and trigger new large-scale refugee influxes. UNICEF estimates that nearly 160,000 people, including 70,000 children, have been displaced since hostilities in the northeast Syrian Arab Republic escalated following the launch of military operations.

438,911 people accessing a sufficient quantity of safe water for drinking, cooking and personal hygiene in Lebanon

UNICEF’s humanitarian strategy is aligned with the Regional Refugee and Resilience Plan, and aims to address the needs of Syrian refugees and vulnerable host communities by delivering a more effective, inclusive and gender-sensitive humanitarian response. To address the protracted nature of the refugee crisis, UNICEF will continue to reinforce the linkages between humanitarian response and longer-term development goals. The programmatic focus on key cross-cutting issues will be strengthened, including the prevention of and response to sexual exploitation and abuse, including gender-based violence, and improving accountability to affected populations.

To enhance access to and quality of education, UNICEF will expand its support to national education systems, focusing on out-of-school children and children with disabilities. Other priorities within the education programme will include the provision of early childhood care/education, conditional cash transfers to support access to schooling, capacity building of local educational institutions and teacher certification and trainings.

The WASH programme will provide Syrian refugees in camps, informal settlements and urban and rural areas with safe WASH services and emphasize the transition to more sustainable and cost-effective WASH solutions.

In addition to routine vaccination and mass vaccination campaigns to address outbreaks of diseases such as polio and measles, the UNICEF health and nutrition programme will promote equitable access to preventive and curative interventions. This will include the identification and treatment of acutely malnourished children, the promotion of infant and young child feeding and support for newborn care services and growth monitoring. UNICEF will reinforce the capacities of primary health care units and provide parents and caregivers with awareness-raising sessions on early childhood development.

UNICEF will continue to work closely with local authorities to strengthen national child protection systems and policies. Children and caregivers will gain equitable access to community-based mental health and psychosocial support services and child protection assistance. Key interventions will include the provision of cash grants to unaccompanied and separated children; identification, referral and service provision for children with protection needs; support for safe spaces for women and girls (including survivors of gender-based violence); and efforts to prevent child marriage and child labour.

UNICEF will continue to address the needs of adolescents and youth by increasing access to and quality of technical and vocational training and innovative skills-building programmes, to enhance adolescents' meaningful engagement, empowerment and employability.

Humanitarian Action is at the core of UNICEF’s mandate to realize the rights of every child. This edition of Humanitarian Action for Children – UNICEF’s annual humanitarian fundraising appeal – describes the ongoing crises affecting Syrian refugees and other affected populations in Turkey, Lebanon, Jordan, Iraq and Egypt; the strategies that we are using to respond to these situations; and the donor support that is essential in this response. 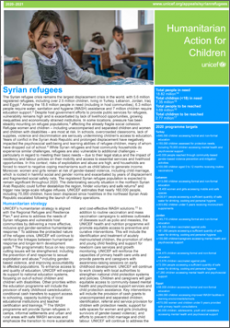 Download the full appeal to find out more about UNICEF’s work and targets for Syrian refugees and other affected populations in Turkey, Lebanon, Jordan, Iraq and Egypt.
Download file
(PDF, 218,60 KB)